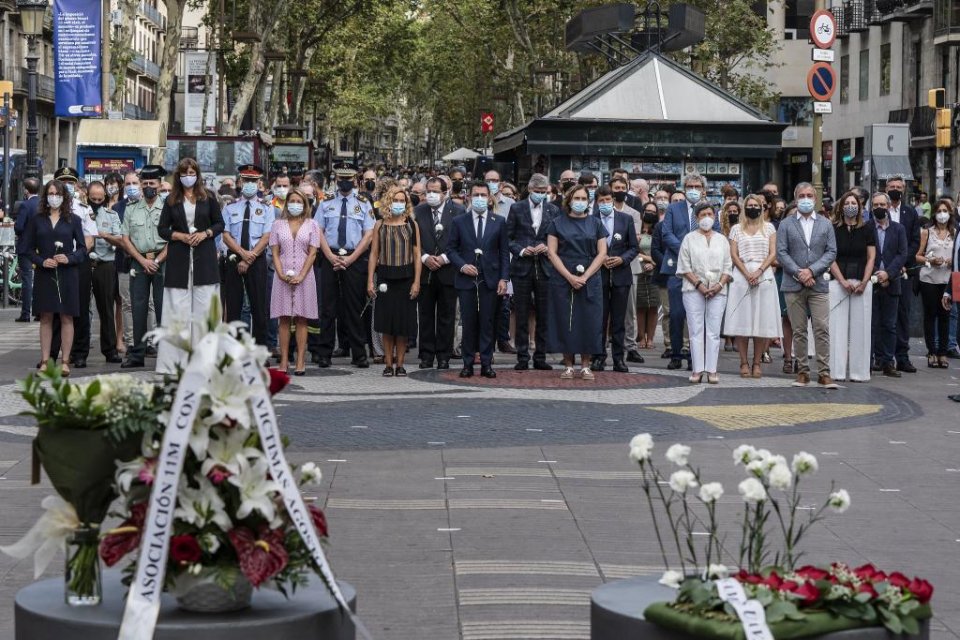 Barcelona held a sombre ceremony on Tuesday in memory of the 16 people who died during terror attacks in the city and nearby resort of Cambrils on 17 August 2017, that also left more than 140 people injured.

Wearing face masks and maintaining social distance because of the pandemic, dozens of people observed a minute’s silence on La Rambla boulevard, where a van was driven at speed four years ago by Younes Abouyaaqoub through the middle of the pedestrianised area in the centre of the street, leaving a trail of bodies. He was shot dead by police four days later.

Relatives of the victims laid white carnations in front of a memorial plaque which marks the spot where the van came to a stop.

Among those in attendance was the president of the Catalan government, Pere Aragonès, and Barcelona mayor Ada Colau.

‘Four years after the death of my son, it’s still hard. I think every year it gets harder,’ Javier Martinez, father of three year old who died in the attack, told reporters.

The attacks had been orchestrated by a jihadi group based in Ripoll, under the town’s imam Abdelbaki Es Satty, who died with other members in an accidental explosion in an apartment in Alcanar on the eve of the attacks.

Several hours after the attack on La Rambla in Barcelona, five of his accomplices drove into more pedestrians and stabbed a woman who later died of her injuries in Cambrils, a seaside resort 100km to the south. All five were shot dead by police. The Islamic State group claimed responsibility for the double attack.

In May Spain’s National Court convicted three men with prison sentences from 8 to 53 years for their role in the attacks. The court sentenced Mohamed Houli to 53 years and six months, and Driss Oukabir to 46 years in jail for the attacks in Barcelona and Cambrils. Said Ben Iazza was sentenced to 8 years for his collaboration with a terrorist organisation.

The terrorist cell had been planning attacks on a large scale involving explosives, with sites such as the Eiffel Tower in Paris and the football stadium of Barcelona among alleged targets. But the accidental explosion in Alcanar pushed the group to quickly improvise the two attacks in Catalonia.

The Spanish Congress has repeatedly denied an investigation committee on the attacks.

Spanish Prime Minister Pedro Sánchez tweeted on Tuesday: ‘Four years ago, Barcelona and Cambrils suffered terror on their streets. Today, we remember the victims of these terrible attacks with our eyes set on a present and future of peace and co-existence. For a society free of hatred and barbarism, that advances and progresses with unity.’

Click here for all our reports on the Barcelona Terror Attacks

Sitges to end curfew from early hours of Friday 20 August