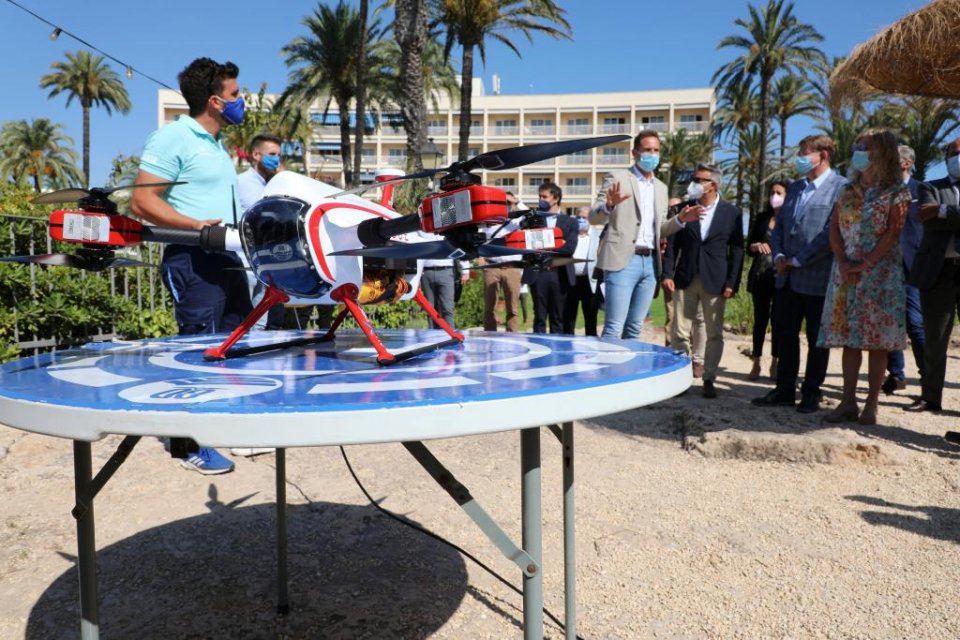 Drones to be used to prevent drownings

The use of drones along the region’s coast is to be tried in an attempt to reduce the number of drownings. As part of the Stop ahogamientos campaign, the drones will work alongside the rescue services at 10 beaches chosen for the pilot scheme.

The unmanned drones will also be equipped with floating devices which can be dropped for swimmers who appear to be in difficulty.

The pilot scheme was presented by Valencia president Ximo Puig in Jávea on Tuesday and the 10 beaches chosen to take part in the scheme are: Guardamar de Segura, Denia, Jávea, and Benidorm in the Alicante Province, Alboraya, Gandía and Cullera in Valencia and Burriana, Oropesa and Peñiscola in Castellón.

As part of the Stop Drownings campaign, which aims for zero drownings along the region’s coast, Puig also called on people to be vigilant and reminded them that drowning is the third cause of death in the world among children aged between five and 14.

Last year there were 61 deaths from drowning across the region and this year, up to 31 July there have been 31.

The vaccine department of FISABIO (Valencian Foundation for the development of Health and Biomedical Investigation) is to coordinate the international Covidrive project which aims to evaluate the effectiveness of vaccines against Covid-19.

The project, which brings together 35 hospitals in 10 countries, begins its studies this week with the AstraZeneca and Janssen vaccines. As other vaccines come onto the market they will also be included in the studies.

Antonio Carmona, investigator and scientific coordinator of the project explained: ‘Covidrive will bring essential information when planning Covid-19 vaccination programmes in Europe. By concentrating on effectively preventing hospital admissions with serious cases of Covid-19, we’ll be able to control the pandemic and reduce the pressure on hospitals.’

Javier Diez-Domingo, head of FISABIO’s vaccination investigation department, explained that the main priority of the study will be the effectiveness of vaccines against hospitalisation from Covid-19, because the main reason governments impose restrictions like social distancing, the use of face masks, or the perimeter closures of towns, is to relieve the pressure on the health system.

Valencia’s pharmacies sold a total of 32,017 antigen tests during the first week they could be bought without prescription, according to the Consultancy IQVIA.

Nationally, 386,155 tests were sold, a 319.6% increase on the previous week when the tests were only available on prescription. Officially the sale of antigen tests without prescription began on 21 July, and the largest number was sold in Catalonia (104,596) followed by Madrid (58,893), Galicia (43,627) and Andalucia (34,430), with Valencia coming in fifth position.

Hospital admissions have decreased slightly week-on-week, but those needing intensive care treatment has risen. As of Friday, there were 622 people in the region’s hospitals, down on the previous week’s 689 with 113 people in ICU, compared to last week’s 107. Click here for all reports on: Coronavirus in Spain.

Most ICU patients not double-jabbed

The success and importance of vaccinating was underlined again this week by regional health minister, Ana Barceló, who said that nine out of 10 patients in intensive care had not received both Coronavirus jabs.

Speaking on Monday, Barceló said that 92.1% of those admitted to ICU suffering from Coronavirus were not fully vaccinated, while only 7.9% had received both jabs. She said: ‘The figures speak for themselves and show once again that vaccination is the main defence we have against infection by Coronavirus.’

‘The vaccines work and clearly reduce the risk of serious hospitalisation and death from Covid-19,’ she added, appealing to people to continue attending vaccination centres when called, ‘to keep raising a collective barrier which makes the transmission of the virus difficult and protects society as a whole, which is our aim. Each day that we continue and increase vaccination we raise the barrier higher’.

All students over the age of 12 will begin the 2021-22 academic year having received at least one dose of vaccine against Covid-19, thanks to an earlier than expected delivery of vaccines. The announcement came on Thursday following a meeting between the regional health minister, Ana Barceló, and Education Minister, Vicent Marzà.

The vaccination of 18, 17 and 16 year olds across the region, those in Bachillerato, Formación Profesional and 4ºESO, is starting within days of the announcement being made, and in fact the vaccination of this group is now two weeks ahead of the original plan. Within hours of the government announcement, parents of teenagers as young as 13 reported receiving SMS messages from the health department giving families the option to say if there are any dates the child in question is not available due to being on holiday.

The subsequent two weeks will be the turn of 12 to 15 year olds (the rest of the ESO year groups) and they will have received at least their first jab before school begins on 8 September.

Vaccinations will not be carried out in schools and other educational institutions as had originally been proposed, instead the youngsters will be called to vaccination centres across the region, attending either with a parent or guardian or with their authorisation.

Marzà said he was delighted to be starting the new academic year with the school population vaccinated and pointed out that this back-to-school would be even safer than last year’s, starting with all teaching staff vaccinated, as well as those in Formación Profesional, Bachillerato and ESO, with at least a first jab.

I have been surprised at the speed of the operation having already received both appointments for my 15 and 16 year old, starting next week, which means they’ll be double-jabbed before they return to the classroom. A big thank you to the Valencia Health Department for keeping us safe. ALSO READ: Covid-19 Vaccinations in Spain

Thank you for the music