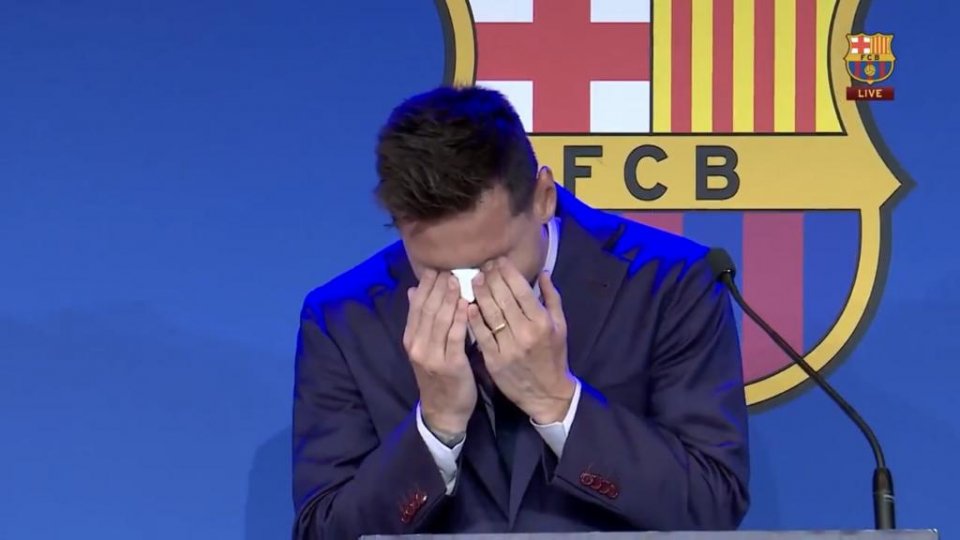 A tearful Lionel Messi confirmed on Sunday that he will be leaving FC Barcelona after the club announced on Friday that it could no longer afford paying the Argentine star’s high wages without jeopardising its financial future.

‘I tried to behave with humility and respect and I hope that is what remains of me when I leave the club,’ an emotional Messi told a press conference [see video below] as hundreds of fans congregated outside Barça’s Camp Nou stadium to bid farewell to the player they called Messiah.

The 34-year-old, who has been at the club for 21 years, becoming its all-time goalscorer with 682, broke down in tears before giving a speech and was greeted by a lengthy standing ovation from the media, current and former team mates and coaches in attendance.

Barça president Joan Laporta confirmed on Saturday that the club was unable to re-sign Messi as it had no margin to pay more under La Liga’s Financial Fair Play (FFP) rules. He said the club and player had both wanted to sign a new contract, but salaries already represent 110% of the club’s earnings, meaning it is spending much more than expected and such a move would be financially risky.

‘The club is above everything – even above the best player in the world,’ Laporta told a news conference.

Laporta said that the club had agreed two deals with Messi, firstly a two-year deal made payable over five, and then a five-year deal. However, they were unable to get the deal done because of La Liga’s FFP rules.

The Barça president also said that the financial situation that he had inherited from former club president Josep Maria Bartomeu was ‘far, far worse’ than anticipated.

‘I don’t want to go on and on about the situation we inherited, and the awful decisions that were made in the past,’ said Laporta. ‘We have gone from bad to worse.’

On Sunday, Messi did not say what his immediate plans were, but after French newspaper L’Equipe reported on Friday that he was set to join Paris Saint-Germain (PSG) after their manager Mauricio Pochettino told reporters that Messi was an ‘option’, the Argentine confirmed that it was ‘a possibility’. However, he insisted that at this moment in time, he has not agreed a move anywhere.

On Friday, FC Barcelona announced that despite the club and Messi ‘having reached an agreement and the clear intention of both parties to sign a new contract, this cannot happen because of Spanish La Liga regulations on player registration’.

‘As a result of this situation,’ a statement read, ‘Messi shall not be staying on at FC Barcelona. Both parties deeply regret that the wishes of the player and the club will ultimately not be fulfilled. FC Barcelona wholeheartedly expresses its gratitude to the player for his contribution to the aggrandisement of the club and wishes him all the very best for the future in his personal and professional life.’

You can watch Messi’s emotional press conference below via FC Barcelona’s Twitter link, with English translation: