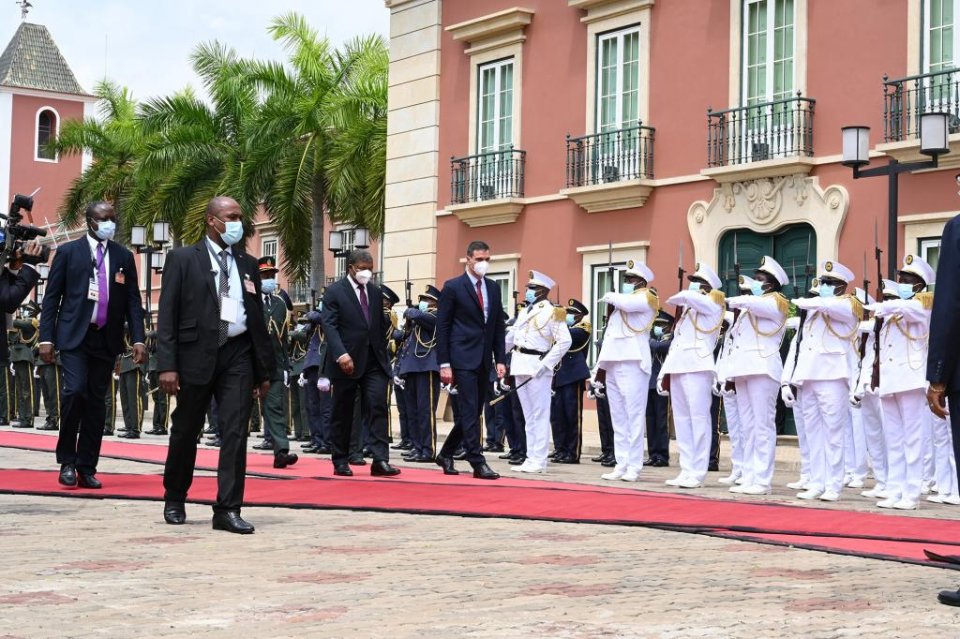 Spanish Prime Minister Pedro Sánchez has concluded a mini-tour of Africa – having visited Angola and Senegal – with the objectives of strengthening commercial ties and addressing migration issues.

Both countries are deemed a priority in the government’s recent foreign action plan: ‘Focus Africa 2023’.

Spain’s plan, which details over 250 actions, aims at establishing strategic relations with Africa over the coming years. The actions are related to economic ties, peace and stability agendas, migration management, the fight against climate change, as well as gender equality and development.

According to Moncloa, ‘Focus Africa’ aims to ‘strengthen collaboration with African governments and boost Spain’s presence in Africa through a genuine strategic partnership with the continent’.

Sánchez began his tour in Angola last Wednesday – the first Spanish prime minister to visit the country since Felipe González in 1992.

At a business forum held in Luanda, the prime minister’s address focused on the economic relations between Spain and Angola, highlighting the importance of the ‘great opportunities’ and growth potential for Spanish companies that the country has to offer.

The prime minister expressed his gratitude to Angola for choosing Spain as its preferred partner for the diversification programme of its economy.

For years, Angola has been dependent on oil, with 50% of its GDP and 80% of its public income dependent on the raw material. However, the country is now pushing for the diversification of its economy – with several Spanish companies showing interest in large public contracts in industries such as energy, transport, engineering, water, and waste treatment.

Angola’s President Joao Lourenço welcomed Sánchez – who travelled to Africa with a dozen representatives from Spanish companies – during his stop in Luanda on Thursday.

Lourenço expressed his wish for Spain to become a ‘key partner’ in the diversification of Angola’s economy – a desire reflected by the four new cooperation agreements signed by the Spanish government in the areas of fishing, agriculture, industry, and air transport during the visit.

In addition to economic interests, Sánchez also addressed Angola’s role in conflict resolution. The country is regarded as crucial to the diffusion of regional tensions, as well as being a safeguard of maritime security in the Gulf of Guinea – where Spain has pledged to send a warship to fight piracy.

The Spanish prime minister stated that the country’s ‘commitment to peace and stability are important assets that have given Angola weight, respect, and influence in the achievement of peaceful and dialogue solutions to the conflicts in the region. We welcome President Lourenço’s commitment to mediation and the search for dialogue solutions to conflicts in the three major regions of sub-Saharan Africa – the Gulf of Guinea, the Great Lakes and Southern Africa’.

On Friday, Sánchez travelled to Senegal to hold a meeting with President Macky Sall – the primary agenda being migration issues.

The prime minister and his Senegalese counterpart signed a joint declaration and two memorandums which pledge to strengthen cooperation on migration matters.

Sánchez indicated that the joint declaration commits to promoting regular migration by means of circular migration, while also creating an ‘institutional cooperation framework that allows a more efficient management of migratory flows, especially affecting more vulnerable groups such as children, people with disabilities and women’.

Officials in Madrid have expressed concern that a global economic slump due to the Covid-19 pandemic may result in a rise in migrants making the perilous journey – many through Spain – to Europe.

After France and Italy, Spain has the highest number of the registered Senegalese diaspora – a total of some 70,000 people.

The recent upturn in the departure of cayucos [small canoes] from Senegal to the Canary Islands archipelago has resulted in thousands of migrants, and potential asylum seekers, being held in camps on the islands – an issue which continues to cause political and humanitarian tensions for Spain.

Sánchez stressed that both he and Sall agreed on the importance of ‘conveying a strong message to the mafias’ behind human trafficking and stressed that ‘when we talk about people who arrive, we often forget those who cannot arrive because they die in the sea’.

The Spanish prime minister discussed with Sall Spain’s concern regarding the imminent reactivation of repatriation flights from Spain to the West African country – which have been suspended since 2018.

However, a date for the recommencement of deportation flights for Senegalese migrants has not been set after Sánchez’s meeting with Sall.

The prime minister’s time in Senegal concluded with two symbolic trips – a visit to a military base for Spanish and other international forces fighting extremism in the Sahel region, and visit to the site of the first Cervantes Institute headquarters in sub-Saharan Africa – which will be inaugurated in Dakar this summer.

Having dubbed 2020-2030 as ‘Spain’s decade in Africa’ the Spanish prime minister had now added Angola and Senegal to the list of African countries visited during his term thus far – which include Algeria, Mali and Mauritania.

It is expected that Sánchez’s next trip will take him to Morocco, a pending visit after a scheduled meeting  last December was cancelled due to the pandemic. However, no new date has yet been confirmed.

10 reasons to fall in love with the Cádiz Province