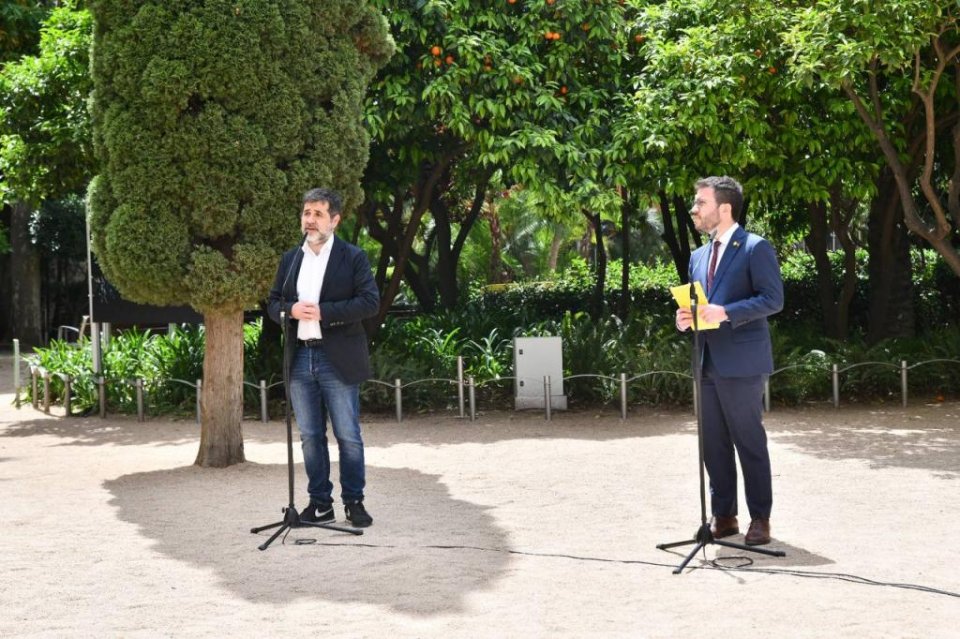 Pere Aragonès was voted as the 132nd president of Catalonia by the pro-independence majority in parliament on Friday 21 May, ending a three month political deadlock [see earlier report below] and allowing him to lead a renewed coalition government. Aragonès received the parliamentary support of 74 MPs, with 61 votes against.

He won the support of his own party, Esquerra Republicana (ERC), the Junts per Catalunya (JxCat) party, as well as the far-left CUP.

Catalonia’s two main pro-independence parties, Esquerra Republicana (ERC) and Junts per Catalunya (JxCat), announced a preliminary agreement to form a new coalition government on Monday. It ends three-months of negotiations and stalemate since elections were held in Catalonia on 14 February. If no Catalan president is elected by 26 May, another election would have to be called.

Secretary-general of JxCat, Jordi Sànchez and ERC’s presidential candidate Pere Aragonès, briefed the media about the parties’ agreement in central Barcelona on Monday.

In his bid to become Catalan president, Aragonès will now be backed by his own party alongside JxCat. The far-left CUP had already reached a deal to support Aragonès in late March, as long as any further deal with JxCat was not incompatible with the anticapitalists’ conditions.

The left-wing ERC party and the centre-right JxCat are rivals for power at the local level but agree that Catalonia, with a population of some 7.5 million, should be independent from Spain. However, they have disagreed on how to proceed with the push for that independence, as well as what influence any new administration should allow the former Catalan president Carles Puigdemont, who is now an MEP and who left for Belgium after Spain’s crackdown during and following the October 2017 referendum.

Click here for all our reports related to Catalan Independence, as well as the Catalan Trial, verdicts and sentencing.

Each party will manage seven Catalan ministries each, including the newly created Feminism and Climate Action departments.

In a joint statement, the two pro-independence groups said they had reached the deal over the weekend, after two days of discreet meetings held by Aragonès and Sànchez.

‘The two parties apologise for having taken so much time in sealing a deal and commit to putting together a government which seeks to build up the citizens’ trust again, with maximum trust being shared between partners and collaboration with CUP,’ the statement read.

‘Our aim is to serve the country and its people in the best way possible, to govern for everyone and progress toward the common aim of an independent Catalan Republic.’

Divisions had arisen during the three months of talks regarding who should be in charge of overseeing the path to independence, and whether this would mean that the government has a watchdog or reports to an entity beyond the traditional institutions.

JxCat had been insisting that former president Puigdemont’s private organisation, the  Council for the Republic, should monitor the road to independence – although they denied this would mean any interference in the cabinet’s decision-making. The ERC and CUP accused the body of being ‘biased’, taking into account that Puigdemont is at the same time leader of the Council for the Republic and of JxCat – as well as being an MEP.

Spain’s central government spokeswoman, María Jesús Montero, welcomed that a repeated election is no longer on the table and said that central authorities are hoping the upcoming Catalan government ‘abandons unilateral means’ to achieve independence.

‘We know where those lead us and that’s not good,’ Montero told Cadena SER radio, in reference to a banned Catalonia independence referendum and failed independence declaration in October 2017 that resulted in the ousting and prosecution of the region’s leaders.

Roughly 50% of Catalans want to carve out an independent state, while the other half want to remain a part of Spain.

Click here to read all our reports on Catalan Independence.

Click here for all reports related to the Catalan Trial, verdicts and sentencing.

Extremadura in English – news round-up (17 May)