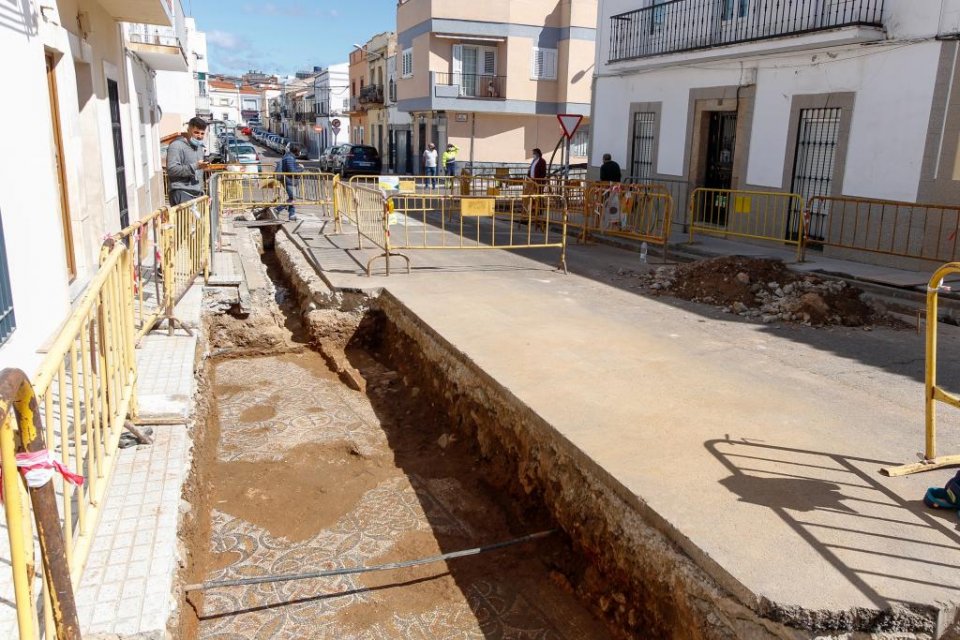 An ancient Roman mosaic, dating back to the 3rd or 4th century, has been discovered on a quiet residential street in Mérida. The section of the mosaic that has been uncovered was discovered by builders carrying out roadworks on Calle Benito Toresano. It is believed to be part of a much larger mosaic that, in all likelihood, spans across a far greater section of the street and possibly extends beneath the houses of local residents.

Currently, the mosaic can be seen by anyone walking on the street, after coming into view as a result of recent gas installation works. The Consorcio de la Ciudad Monumental will carry out a more extensive excavation of the area beneath the pavement, but may never be able to see the full picture of the artwork as it is not possible to dig beneath the surface of private property where people live.

Local resident, Martín Reyes, who has lived in the neighbourhood for over thirty years, said, ‘it’s beautiful but Roman ruins are very common in Mérida. There are some people living in this neighbourhood who have found Roman coins in their own back gardens’.

Following the discovery of this latest mosaic, the Roman Art Museum in Mérida has drawn attention to the fact that another mosaic had previously been uncovered in the same street of Calle Benito Toresano – a ‘mosaic of a wild boar and dogs’, named for its central emblem. Currently the mosaic presides over the Assembly Hall for Extremadura in the city of Mérida. You can view images of it in the Tweets below from the Roman Museum:

Pfizer will increase its shipment of vaccines by 59% during June (from 1.7 to 2.7 million doses) with Extremadura set to receive 300,000 more doses.

This significant growth will accelerate the vaccination rate and allow for 30 to 39 year-olds to begin receiving the vaccine earlier than expected, starting from late June.

Pfizer is currently the only vaccine manufacturer that is regularly shipping its doses, at roughly 39,000 each week. For vaccinations to continue at their current pace, Extremadura and the rest of Spain’s regions will be hoping that no shortages occur down the line, although this is still a possibility and one that is beyond their control.

Yet with the end of the State of Alarm recently announced by the government, and the elderly and most vulnerable groups already vaccinated, there is a lot for Extremeños and other Spaniards to be optimistic about.

Cáceres Fair will be postponed until September. Shortly after news broke that it wouldn’t be able to include fairground rides if it took place this month as originally scheduled, the town hall and the organisers of the fair reached an agreement to hold the event in the latter stages of summer.

The mayor of Cáceres, Luis Salaya, explained the reason for this change, stating, ‘We believe that it will be a good option for children to have their fair and for business owners in the sector, who have had a very bad time, to have that option.’

Rosa Morgado, representative of the Extremadura Fairgrounds Platform, said, ‘We have thought that given the Covid situation that exists, as the San Miguel Fair has sometimes been held here and so that Cáceres does not go without its fair, we have agreed to organise it for September.’

As long as the health situation allows it, the fair will have rides for children, food stalls, and tents for adults to consume drinks and socialise.

The Mérida Fair will return with all its features

On Wednesday 1September, the Mérida Fair will commence and last until Sunday. The current plan is to go ahead with the fair in its full form which includes a fairground with rides, various stalls and large tents for the consumption of food and drinks. According to a press release from the town hall, these features will be restored ‘as long as the health situation allows it’.

That is not to say, however, that there will be no rules in place with regards to the wearing of face masks and social distancing, as the town hall also stated that the fair ‘will have all its elements, complying with the measures against Covid that are stipulated in September’.

Ana Aragonoses, the festival’s delegate, presented the initial plan to the fairground representatives, Rosa Morgado and Francisco Vega. ‘They’ve come to an agreement with us on the idea and will be called upon on the 9 June to make decisions on other issues such as children’s day and measures to make the fair more inclusive,’ she said.

Those working at the fair will also receive financial aid from the town hall, as long as they’re from Mérida and participated in the last fair which was two years ago.