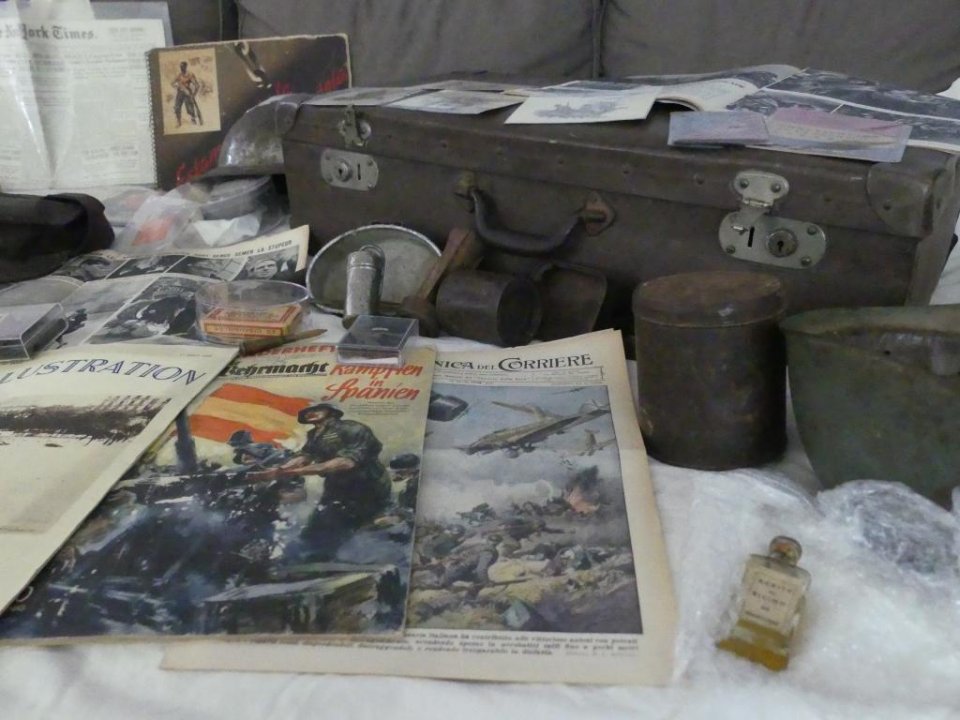 ‘It was the first time I ever really enjoyed work,’ recalls Nick Lloyd. For over a decade, he offered a unique experience in Barcelona leading niche tours on the history of the Spanish Civil War.

La Rambla in Barcelona, however, where Lloyd was often found quoting George Orwell’s Homage to Catalonia to his tour participants, is currently unrecognisable. The recent images of sparse crowds, shuttered bars and souvenir shops, is a distant reality from the 12 million visitors Barcelona saw in 2019.

The unprecedented impact that Covid-19 has had on the tourism industry, has caused worry for many like Lloyd – not so much as to when the pandemic will end – but how to survive until it does so.

Before 2020, the idea of working from home had never crossed the guide’s mind. His work involved taking groups on what he refers to as a ‘walking history class’ – hours of discovery and discussion based on the social and political history of Barcelona during the war.

His livelihood as a Spanish Civil War guide, Lloyd explains, was a result of several converging life experiences.

Having studied geography in the UK, Lloyd relocated to Spain over 30 years ago, bringing his interest in nature with him. He began to organise wolf-watching tours for groups in Zamora where he discovered a love of, and flair for, storytelling. The venture, however, was a failure – the wolves never tended to make an appearance during scheduled tours, and Lloyd was forced to abandon his undertaking as a nature guide.

During the same time, Lloyd recalls that ‘about 40 metres from my flat, in the neighbourhood of Poble Sec, they hung a plaque in honour of Francesc Boix’.

Boix – a young photographer during the Spanish Civil War – was forced to exile to France, where he was captured by the Nazis, along with thousands of other exiled Republicans, and sent to the camp of Mauthausen in Austria.

The Nazis used Boix as a slave technician at the camp’s photo lab and there, unbeknownst to them, the young Barceloní made secret copies of the rigorous documentation that the SS were forcing him to develop and archive. The clandestine copies would be later used as some of the only photographic evidence available during the Nuremberg trials, and Boix would become the only Spaniard to testify at the trials against the atrocities committed by the Third Reich.

Boix’s compelling story, and his memorialisation in Poble Sec, inspired Lloyd to re-read George Orwell’s account of his experience during the Spanish Civil War in Barcelona and as a volunteer on the front line.

With Homage to Catalonia in hand, Lloyd attempted to retrace his fellow Englishman’s steps in the city – explaining the difficulty he encountered as ‘there was misinformation in books, no signage, and conflicting information from locals’. He would make it his own personal project to research and locate the sites – marking them out on a map.

‘It grew organically from there,’ he recalls. Lloyd began to develop an obsession with the Civil War – creating a map that spanned beyond retracing Orwell’s steps, in an attempt to create a tour that would encompass an overall understanding of the origins and impact of the conflict on the city.

In 2012, Lloyd’s tour was the subject of an article in The Guardian – exposure, he says, that allowed the tour to evolve from a personal project to full-time job. ‘I never thought it would go as far as it did’, he remarks.

University students, activists, politicians, correspondents, academics, distinguished writers and filmmakers from all over the world began to make bookings to come on tour.

The guide underlines that the success was not so much his enthusiasm for the subject, but the subject itself, and moreover, the engagement of participants on tour – many of whom had direct links to the history of the war and fascinating stories to share.

‘It is different from going on a tour about Gaudí,’ he explains, highlighting that the history of the Spanish Civil War is ‘more recent – the politics of then still have relevance now. Often I would have family members of those who fought or volunteered during the conflict join me.’

Gathered around cortados of coffee or glasses of local vino tinto, participants were given an opportunity to rest at two bars during breaks that Lloyd programmed into his 4.5 hour history walk. They became more than just refreshment stops – rather spaces whereby those on tour could bring their queries of and connections to the Spanish Civil War to the table.

Lloyd recalls the moment of when an elderly American woman shared her story. Her father had travelled from his native Cyprus in 1936 to join the International Brigades – some 40,000 volunteers from 50 different countries, who fought against Franco’s fascist-nationalist side. She had brought her late father’s volunteer identity card from his time in Spain on tour.

‘The power of objects hit me,’ Lloyd remembers – the artefact lent huge tangibility to the history being discussed on tour. The seed was sown, and from then the guide began to buy antiquities, a collection which would be incorporated as part of a show-and-tell during the refreshment stops on tour.

His ‘museum in a suitcase’ – which now comprises of hundreds of antiquities – became a unique historical experience for visitors – especially considering the absence of any museum dedicated to the history of the Civil War in Barcelona.

As international travellers were forced to abandon their suitcases and journeys in March 2020 due to Covid-19 restrictions, Lloyd was obliged to close his ‘museum in a suitcase’. He had to face the reality that, although the elusive wolves had once been an issue as a guide, he would now have to try and survive a Barcelona without tourists.

At home, with two young children and a mortgage to provide for, he knew he needed to reinvent himself – ‘I was suddenly thinking – where’s the money going to come from? I woke up each morning as if there was a slab on my head.’

Lloyd began to explore the possibility of recreating his profession online, albeit with doubts. His initial reservations were concerned with ‘so many great quality tours and talks out there for free – you are competing with people of very high calibre’.

Rather than trying to replicate his successful tour on the Civil War, Lloyd instead focused on the opportunity of offering a more in-depth presentation of topics discussed on tour, as well as continuing to incorporate the artefacts from his museum in a suitcase during the virtual escapades.

Technology has allowed virtual visits to almost anywhere on the planet, and Lloyd began to devise presentations incorporating Google maps and street views –including ‘stops’ to places and landmarks that were previously impossible in his tour of Barcelona.

He now offers over a dozen one-off presentations on themes including ‘Photographers and photography in the Spanish Civil War’, ‘Republicans in Exile’, ‘Gernika the atrocity, Guernica the painting’, and the ‘Spanish Civil War from the high Pyrenees, Huesca, Monegros, Belchite and Teruel’.

Lloyd stresses that he likes to present each virtual tour ‘so that it’s part of a conversation, not just a lecture’. The conversation sparked by his virtual offer, has carried over to Twitter – where he claims that positive feedback has helped his virtual tours to grow in numbers and in scope.

Demand has lead him to create a series of virtual ‘road trips across Spain’, comprising of several sessions, which span over four weeks. He explains that the pretence is ‘taking a road trip in a luxury coach enjoying great food and drink … attempting to identify a few of major trends in the country’s history and today’s society – and giving a good overview of the landscapes we’ll travel through, talking on the way about history (with plenty of Civil War and politics), geography, wildlife, environmental issues, the arts, culture, food’.

Participants have joined from countries such as Finland, Canada, the Czech Republic, Turkey, Holland, Britain, Ireland, Greece, and even Spain. Lloyd describes that some have become really involved – preparing tapas and buying Spanish wines to enjoy while joining the virtual tour.

He adds that those that join the virtual experience nearly always bring a fresh perspective or interesting anecdotes to the presentation. ‘Recently there was as a man from Finland whose grandfather worked for the League of Nations and oversaw the disbandment of the International Brigades. When he was in Barcelona, he witnessed the terrible bombing of the city and documented it.’ The photos his grandfather had taken were shared on screen – proximity to the history Lloyd feels was akin to what often happened during the in-person tours.

In spite of the relative success of the online endeavour, he is concerned that the virtual tours are not a sustainable substitute for his pre-pandemic livelihood.

There is uncertainty in his answer as to when enough visitors will return so he can when resume his tours in the streets of Barcelona. ‘This September? Last year the prospect of “by September” was keeping me sane – but I really don’t know.’

Lloyd is unsure what format tourism will take and is convinced there are aspects of the city that will have been changed forever. Both bars that the guide used as lecture spaces and to display his ‘museum in a suitcase’ have closed – one permanently, the other, with huge losses and an uncertain future.

Touching on the subject of the balance between over-tourism in Barcelona and economic dependency on the industry, the guide explains that he ‘was getting sick of the old Barcelona – not the work – I loved that! But sick of the centre of Barcelona, of what the city had become’. With the streets virtually empty of tourism, ‘part of me thought – great! – let’s build something new, but in reality so many people need those jobs’.

For the meantime, Lloyd’s venture as a virtual tour guide will, and has to, continue.

Information on Nick Lloyd’s upcoming tours and presentations can be found on his twitter account: @Civil_War_Spain, or by writing to: info@spanishcivilwartours.com

Click here for all our reports related to the Spanish Civil War.