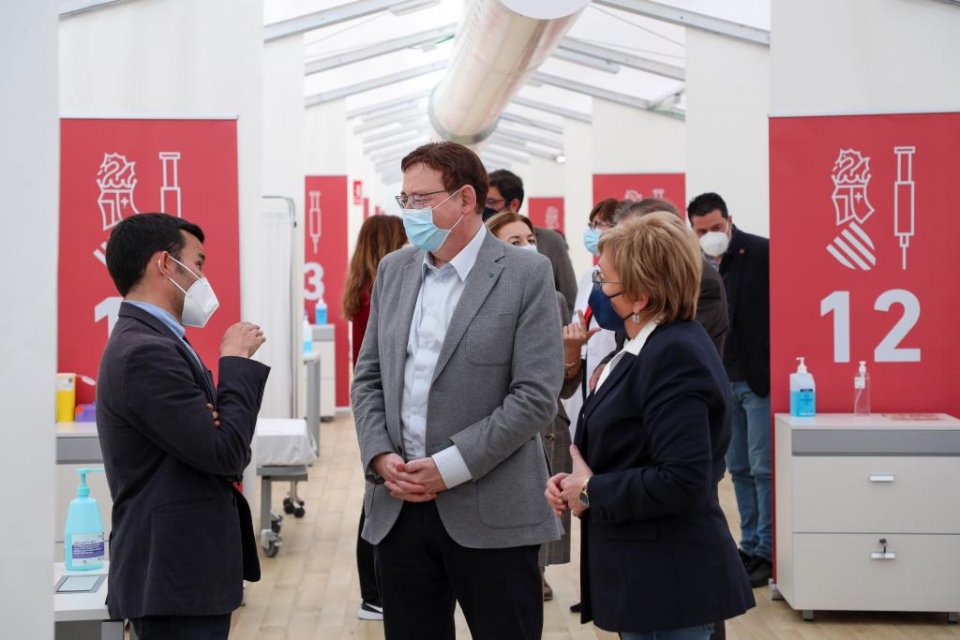 From Monday 15 March, bars, restaurants and also gyms across the region will be able to open indoors with up to 30% capacity.

Valencian president Ximo Puig announced the changes on Thursday afternoon following an inter-departmental meeting, and the measures will be in place at least until 12 April.

Bar and restaurant terraces will now be able to open to 100% capacity and inside spaces to 30%, with a maximum of four people per table, face masks to be worn when not eating or drinking and obligatory ventilation inside. Service at the bar is also not allowed and all establishments must close by 6pm.

Numbers at weddings, baptisms, funerals and similar ceremonies will be extended to include a maximum of 20 people outside and 15 in closed spaces.

Other current restrictions remain in place, such as private gatherings limited to cohabitants and the nighttime curfew of 10pm to 6am.

Puig explained that the measures had been adopted to ‘support economic activity’ and allow ‘a little social activity and to raise spirits’ within the most cautious restrictions in Spain. He insisted in the need to continue containing the virus until the arrival of the mass vaccination programme which will begin in April.

He also said that during the past month and a half the incidence of Covid-19 had declined 96% from 1,500 per 100,000 of the population to just 57, the biggest reduction in the country, and also half the national average.

On Wednesday, the regional governments, including Valencia, voted to keep the perimeter borders closed during the San José holiday, 17-21 March, as well as the Easter break, from 26 March to 9 April. ALSO READ: Details of curfews & restrictions for all regions of Spain during ‘State of Alarm’

Teachers under 55 to be vaccinated by 27 March

From Monday the rollout of the vaccination programme among teachers will begin. Having been given their Fallas holiday, teachers and school staff aged under 55 are now being called to have the AstraZeneca jab in designated vaccination points in 23 towns and cities across the region.

Announcing the plans on Tuesday, Valencian president Ximo Puig said that just over 116,000 people would be vaccinated and that it would be a ‘rehearsal for the mass vaccination’ of the population. Taking advantage of the fact that schools will be on holiday for Fallas days, vaccination of teachers will begin on the afternoon of 15 March, during the days of 16-18 March, as well as the afternoons of 26-27 March. Each school will be given its own place and time. Next week 74,000 teaching and school professionals will be vaccinated in Valencia and 42,000 next Friday and Saturday in Castellón and Alicante. The second doses will be given 12 weeks later.

The nine municipalities in the Alicante province where vaccinations will be administered are: Dénia, Benidorm, Alicante, Sant Joan d’Alacant, Alcoy, Elda, Elche, Orihuela and Torrevieja. The three towns in Castellón are: Castelló de la Plana, Vila-real and Vinaròs.

Staff from state, private and concertado (semi-private) schools will be vaccinated, but the programme does not include universities. Valencian education minister Vicent Marzà said: ‘Today is a day to feel very satisfied to have begun to move forward. Especially with a group like teachers and the school community which is doing an extraordinary job to guarantee the containment [of the virus] in education centres.’

Health minister Ana Barceló explained that teachers over 55 would be given the Pfizer jab, when sufficient doses were available.

While grateful to be given the vaccine, one teacher from l’Eliana said that she felt there were groups in greater need, like those who work in supermarkets or even her elderly parents-in-law who had yet to be vaccinated.

40 cases of Coronavirus have been reported among pupils and families in an outbreak at the Liceo Francés, which had to be investigated by the health department this week.

In one class of 22 pupils aged nine years, 13 students had tested positive, and in many cases entire families of the students had also caught the virus and at least one parent was known to be in hospital. Given the high number of infections it is believed to be the more contagious British variant – but this has yet to be confirmed.

This week there have been 1,776 new cases of Coronavirus, down on last week’s 2,609. There have been 3,304 all-clears, compared to last week’s 6,083. There have also been slightly fewer deaths, 137, compared to 154 last week. The number of those in hospital has also declined, with 587 patients in the region’s hospital as of Saturday and 170 of those needing intensive care treatment. Last week there were 789 admissions with 221 in ICU.

A ray of hope for Valencia CF?

Things could be looking up for Valencia CF, as a potential buyer has appeared in the form of the Crown Prince of Johor. Tunku Ismail Sultan Ibrahim is an acquaintance of the club’s current owner, Singaporean Peter Lim, and has shown interest in acquiring the club. He has even been in meetings this week with the president of the Spanish Football Federation.

The Crown Prince is already the proud owner of Johor Darul Ta’zim FC, or Southern Tigers as they are known, whose fortunes have been turned around since the arrival of their new owner, winning seven consecutive league titles between 2014 and 2020. Although some eyebrows have been raised given that the owner, Crown Prince Tunku Ismail, is also the president of the Johor FA.

The Crown Prince appears to be well-informed of the feeling among fans in Valencia and has been differentiating himself from Lim who some believe is not a true fan of the beautiful game, rather just a businessman trying to make money from the club.

First of all I’m not a business man. Why would I waste my money and spend it in a foreign land. If I do it, it is strictly for a challenge and for a project that I believe in. Pure passion, pure love for the game, and pure determination. No politics, and no b*******. pic.twitter.com/BS4pqPqq0L

In recent years relations between Lim and Valencia supporters have gone from bad to worse. The club has huge debts, has sold off some of its best players and is suffering one of its worst seasons for many years. Fans blame the continued poor results on Lim and his cronies’ mismanagement over the past six and a half years, including the firing of manager Marcelino just after leading them to victory in the Copa del Rey in 2019, and this season selling off some of their best players. The slogan ‘Lim go home’ can be seen from social media posts and graffiti to protest banners on motorway bridges. Has ever a football club owner been so hated?

Meanwhile things at the club continue their spiral of descent as Valencia lost 1-0 to Levante on Friday, in the local derby. Levante are currently five points above Valencia in the league and if things stay the same, Levante could finish ahead of them for the first time in history.

Some wore purple, some held a minute’s silence, while others gathered peacefully with placards to mark International Women’s Day across the region, last Monday.

Meanwhile on the very day many were campaigning for greater equality for women, a man was arrested for allegedly attacking his 53-year-old ex-partner as she left for work. The 51-year-old man, believed to have been waiting all night in his car in the Valencian town of Massamagrell, had to be restrained by passers-by until police arrived.

Equality minister Mónica Oltra condemned the attack, saying ‘not even on 8 March is there a respite’, adding that aggressive attitudes have no place in our society.