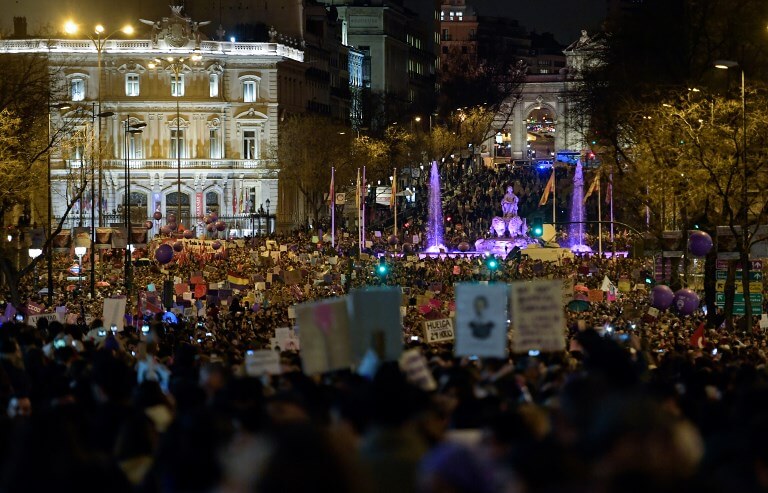 Marches planned for International Women’s Day (also referred to as 8-M) in Madrid on 7-8 March, have been cancelled by the government amid public health concerns with the on-going Coronavirus pandemic.

In an announcement on Thursday, José Manuel Franco, the Spanish government’s delegate in Madrid, said that ‘after studying in detail each of the petitions presented’ and taking into account the ‘possible confluences of different mass concentrations in various areas of Madrid’, the ‘firm decision has been taken to prohibit, for reasons of public health, all the demonstrations and concentrations called’.

He explained that it is ‘at a time when the Community of Madrid continues to be one of the territories in Spain with the highest infection rate as well as hospitalised people, above the national average’.

According to figures published by the Health Ministry on Thursday, the Coronavirus incidence rate for Spain overall is now 153 per 100,000 inhabitants for the past 14 days. Only Madrid (253), has an incidence rate higher than the ‘extreme risk’ level of 250. The occupation of intensive care wards by Covid-19 patients across Spain overall is 25.44% – but in the Madrid region it is 39%.

The 2021 International Women’s Day motto, ‘in the face of social emergency, feminism is essential’ –was set to be greatly limited this year due to the third wave of the pandemic. Opinions have been divided as to whether demonstrations should take place anywhere – with the risks of holding nationwide rallies weighed up with the right to freedom of expression and demonstration.

Until the announcement, the delegation of the central government in Madrid had agreed to gatherings in the capital with a maximum of 500 people, under security measures that allowed for social distancing.

Feminist platforms behind the 8-M organisation had announced their intention to hold controlled and ‘non-massive’ meetings to avoid contagion.

The 8-M Commission had planned four demonstrations in major plazas in the city with a maximum capacity and controlled access. Regarding protocols, the commission expressed that they had been in constant communication with the health authorities and the government delegation.

At the same time, the ‘8M feminist movement of Madrid’, consisting of more than 350 women’s organisations, had also announced various events throughout the week that were due to culminate on 8 March, in the central Plaza de Callao. They had guaranteed a maximum capacity of 250 people in a fenced space with prior registration.

Defending the decision to prohibit the limited demonstrations, José Manuel Franco stated that, according to data, between Sunday and Monday, 60,000 people were going to gather in the streets of the capital. He stressed that the issue was not the organised protests, but rather ‘the accumulation of people in a few days, a few hours and a few places’.

Fernando Rodríguez-Artalejo, Professor of Public Health at the Autonomous University of Madrid, had conveyed that the risk of an open-air demonstration, if the safety distance is kept and those present wear a face mask, is quite low. He added it was an ‘avoidable risk’ but had cautioned that ‘it is very possible that after the march there will be social gatherings – one goes to eat at a restaurant, and there is a greater risk there’.

In recent years, International Women’s Day has prompted tens of thousands of people across Spain to take to the streets in protest. Historically, the biggest demonstrations have taken place in Madrid. According to official data previous gatherings in the capital brought together 170,000 people in 2018, 350,000 in 2019 and 120,000 in 2020.

Last year, opposition parties criticised the government for allowing protests to go ahead a week before a national state of alarm and lockdown were declared, starting from 14 March. Right-wing parties blamed the leftist government for putting its pro-feminist agenda ahead of public safety – signalling the 2020 International Women’s Day demonstrations as a source of contagion.

The coalition government had expressed a lot more caution with regards the organisation of this year’s 8-M. Minister for Health, Carolina Darias, stressed that ‘there is no place’ for mass demonstrations due to current pandemic circumstances, calling for ‘responsibility’ from organisers and participants.

Minister for Equality Irene Montero, from the Podemos group, as well as the deputy prime minister Carmen Calvo from the PSOE party, had both stated they would not be attending 8-M protests. In 2020, both ministers tested positive for Coronavirus days after attending demonstrations in Madrid.

Calvo remarked that this year she ‘will participate in all possible formats that do not put health recommendations at risk’. Montero said that as a government official, she had to ‘scrupulously’ follow health advice. However, she also spoke out against the decision to prohibit gatherings in Madrid, stating that it is a way for reactionary politics to ‘criminalise feminism’.

The president of the Madrid regional government, Isabel Díaz Ayuso, applauded the ‘cautious’ move by the government delegation. Meanwhile, the far-right Vox party also recently voiced a petition that 8 March be declared the ‘Day of the Victims of Covid-19’, a request rejected by Carmen Calvo as an insult.

Throughout the rest of Spain, mobilisations in neighbourhoods and towns, limited concentrations, as well as protest actions that can be carried out from balconies and private spaces, are set to take place instead of mass rallies.

In Catalonia, members of the regional government underlined their support for the right to freedom of expression and demonstration, as long as they are compatible with Covid-19 restrictions.

The largest demonstration in the region on 8 March will take place on Passeig de Gràcia in Barcelona. A ‘static protest’ has been organised, with a registration procedure in place to avoid exceeding permitted capacity on the day – which is a total of approximately 2,000 people. Social distancing and face masks will also be required to partake in the demonstration.

This week, Barcelona mayor Ada Colau announced an initiative in celebration of International Women’s Day. Barcelona City Council has pledged 2 million euros to tackle inequality in technology by promoting education, training, and jobs in the sector for women. The 3-year plan is focused on bridging the technology gender gap, challenging its image as a ‘man’s thing’.

In a statement, Colau added that the pandemic has served to highlight other gender-based inequalities in the country. The mayor made particular reference to the prevalence of gender-based violence, as well as the high proportion of women working in the health and social care sectors in Spain.