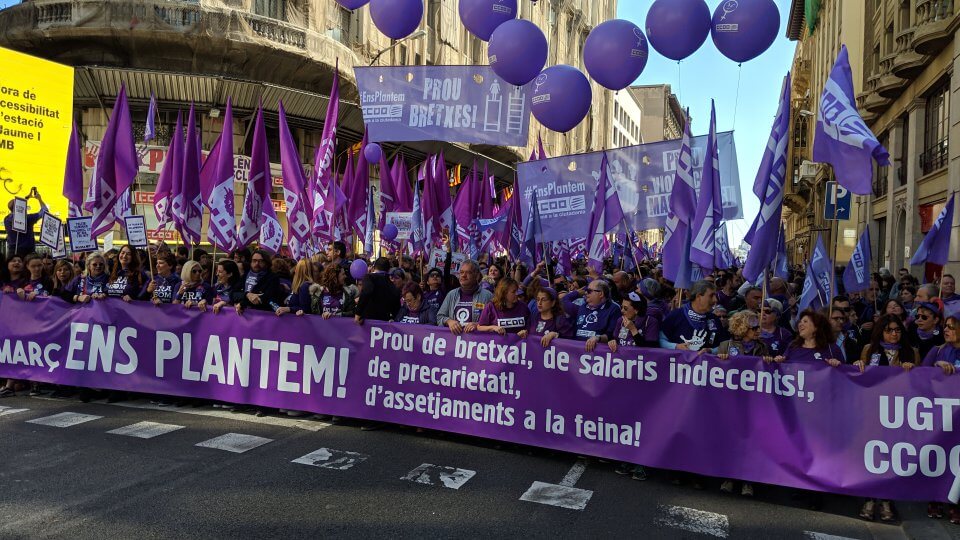 Millions in Spain marked International Women’s Day on Friday with a pro-equality strike and mass protests, in what has become a key political issue with a general election in Spain on 28 April.

Spain’s largest unions CCOO and UGT organised a two-hour work stoppage, under the slogan, ‘If we stop, the world stops’. It was observed by an estimated six million people nationwide, according to UGT. Smaller unions had called for a 24-hour strike.

In the Basque Country, the parliament suspended one of its sessions as most female MPs didn’t show up.

The protestors across Spain aimed to highlight the impact of women in the workplace, as well as reclaiming some of the time they have lost on the ‘invisible’ work, such as housework, that recent reports show still overwhelmingly falls on women.

In Madrid, mayor Manuela Carmena, as well as eminent journalists and businesswomen were among hundreds of women taking part in a mass strike that sought to recreate an unprecedented two-hour work stoppage that took place on the same day in 2018.

In the end, tens of thousands marched through the centre of Madrid, with the fountains along the way bathed in purple lighting.

Mass protests took place all day across Spain, including one in Bilbao that attracted over 30,000 people.

In Barcelona, tens of thousands of women of all ages and men took part in the rallies, and in a festive atmosphere. Many protestors also wore the colour purple, long associated with gender equality.

A major demonstration began at noon at Plaça Universitat, with thousands of people taking part, with large protests also going on in Girona, Tarragona, Lleida, Vielha, and across Catalonia.

The largest demonstration took place in the evening from 6.30pm.

Under the slogan ‘We stop to change everything. Not a step backwards,’ the demonstration was organised by Vaga Feminista, with the support of 150 feminist groups and 550 representatives from civil society and unions.

With the general election in Spain on 28 April, women’s rights has become a key theme of left- and right-wing parties’ campaigns, with all pledging to do something for inequalities.

Spain’s gender pay gap stands at 14.2% according to the latest EU statistics, two points below the EU average [also see below].

Gender violence continues to also take its toll on women, with 47 killed by their partners or ex-partners last year and at least 975 dead since 2003, according to government figures.

Prime Minister Pedro Sánchez, who has made women’s rights one of the central themes of his campaign, tweeted that he wanted ‘a feminist Spain.’

When he came to power in June last year, he appointed 11 women and 6 men as ministers – an unprecedented record in Spain.

‘Only with feminism will we end violence against women and achieve real equality,’ he has said.

There are, however, also increasing dissenting voices against what some conservative groups believe has gone too far.

The right wing People’s Party (PP) did not take part in the Madrid protest, considering the manifesto that called the demonstration ‘unacceptable’.

It called on people to mobilise ‘in the face of the right and far-right that have placed us women and migrants as a priority target of their ultra-liberal, racist and patriarchal offensive.’

The Ciudadanos (Cs) party, meanwhile, also criticised what it considers an attempt by the left to appropriate feminism to get more votes in the 28 April general election.

Far-right party Vox, which opposes a law against gender violence that it feels is ‘ideological’ and ‘discriminatory’ towards men, has also been gaining ground.

Students across Spain also went on strike today for International Women’s Day, rejecting the classroom in favour of taking to the streets.

Official figures from the University of Barcelona (UB) say that ‘practically 100% of students from the faculties of law, education, philosophy, geography, and history have participated in the day’s strikes.’ Elsewhere, between 60-90% of students in other departments in the university joined the protests.

‘According to official figures, in the last fifteen years, 1,000 women have been murdered by their partners or ex-partners, 47 of them in 2018. Last year there were 500 reports every day for abuse and one for rape every six hours,’ the Catalan Students Syndicate write on their website.

Bridging the gender pay gap in Europe could take a century as women’s labour rights face stagnation or even pullbacks in some countries, according to a cross-country trade unions’ association.

‘At this pace, it could take us 100 years to achieve the full equality between men and women, especially salary-wise,’ says Montserrat Mir, a spokesperson for the European Trade Union Confederation (ETUC).

Comprising of 90 trade unions in 38 countries, ETUC demands penalization at the European level of countries and companies that don’t comply with pay-gap legislation.

‘Women continue to get paid less than a man for the same job, which is not legal, nor European, nor democratic,’ said Mir.

The ETUC includes CCOO, one of Spain’s two largest trade unions. A report by its Catalan branch found that women earn 23.4% less than men for the same job, with pensions falling by 37% in comparison with men.

The ‘Women’s Life and Work Conditions’ report also found that female workers take 93% of unpaid leaves in order to look after children, and 84% to take care of relatives.