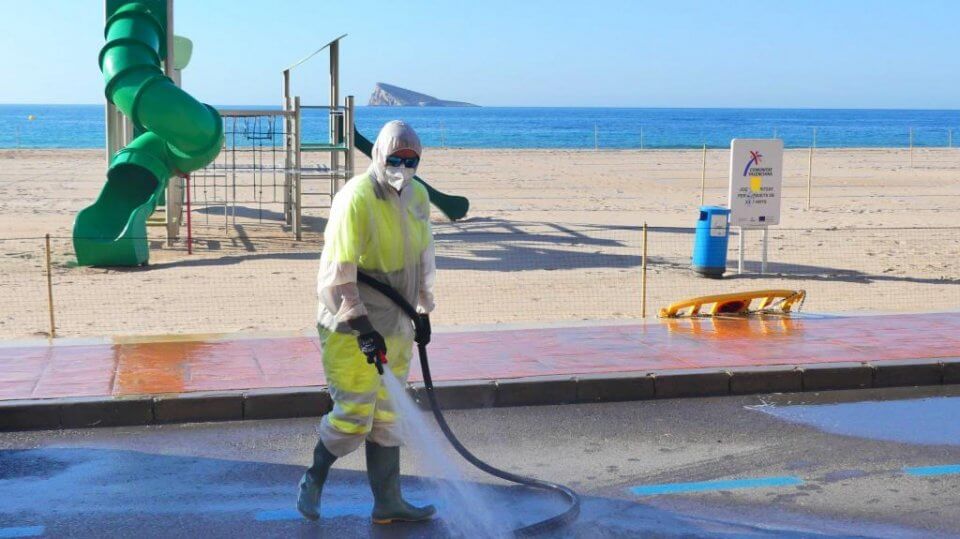 Following the rapid drop in Coronavirus infections in the region, the government decided this week to begin lifting the tighter restrictions originally imposed on 19 January and this time, rather than six, four seems to be the magic number.

As of Monday 1 March, bars and restaurants with terraces will be able to re-open with a maximum of four people per table but only until 6pm. Outdoor sports in groups of up to four people can also resume, and up to four people can meet socially in public spaces. Private social gatherings continue to be limited only to groups from the same household and the perimeter closure of large towns and cities will also be lifted from next weekend (6-7 March). Non-essential shops can now open until 8pm and food shops, pharmacies and other essential stores can return to their normal opening times. The 10pm nighttime curfew and closure of the region’s border remain in place.

The week got off to a good start with Monday’s announcement by the health department that the region’s accumulated rate of infections had dropped to 224 per 100,000. Quite an improvement from 777 just two weeks ago and 1,624 as it was at the end of January.

The figures released this week speak for themselves, with just 3,914 new infections, compared to 10,243 last week. There have been 11,316 all-clears while last week there were 28,401. The number of deaths has also dropped significantly from 444 last week to 294 this week.

The pressure on hospitals also continues to ease as there are currently 1,104 people in the region’s hospitals, compared to 1,563 last week, and 284 needing ICU treatment (388 the week before).

The number of new outbreaks has more than halved, with just 110 reported this week, compared to 248 last week. The vast majority, 81, continue to be from socialising, suggesting that despite all the calls for people to stay at home and minimise social interaction, there are still individuals who are not playing by the rules, who are organising birthday parties or get-togethers with friends.

The Valencia government’s health department has produced a series of 11 short videos to allay people’s concerns and give more information about the variety of Covid-19 vaccines available. Medical experts resolve the most common worries, such as how long immunisation remains, do vaccines protect against different coronavirus variants, and what about pregnant women, the young, and those with serious illnesses.

UK holiday bookings to the Valencia region have soared this week, following Boris Johnson’s announcement that travel restrictions could be lifted as early as 17 May. Of course, being able to travel will mean nothing if holidaymakers find themselves having to quarantine on arrival or once back home.

Manager of Visit Benidorm, Leire Bilbao said: ‘Destinations that British tourists can go to will be examined with a magnifying glass – the epidemiological situation, if there is a health passport for those who’ve been vaccinated, what type of test is required for those who haven’t and if quarantines will be lifted.’

Against this background her worry is what happens if Spain ‘doesn’t do its homework properly’ in the easing of restrictions and suffers a new wave of infections. She said there was a lot at stake in the tourist regions. Benidorm has a special interest, given that around 50% of its visitors are British.

Just a scout around social media sites about Benidorm shows how many British holidaymakers are desperate to return to their favourite destination. Jet2 reported a 600% increase in flight reservations following Boris Johnson’s announcement, while easyJet said that along with Malaga and Palma, Alicante was one of the favourite world destinations among British tourists when borders re-open.

Hotel owners have welcomed the news that could mean the return of foreign tourists which is what the sector needs as in some parts of Alicante province, the national market barely reaches 25% of the total. However, the news should be read with caution as most bookings have been made with free cancellation policies and whether people can travel or not will depend on the evolution of the pandemic.

Click here for all our reports on Travel & Tourism

Across the region, and indeed across Spain, you may have spotted an unusual flag being hung from balconies this weekend. It represents the SADR (Saharan Arab Democratic Republic) in north west Africa, whose history is inextricably linked to Spain’s. For more than 100 years the area, previously known as Western Sahara, was a Spanish colony, and its people were entitled to Spanish nationality. But on 27 February 1976 the Spanish withdrawal from the area was completed and soon after a new, far worse colonialisation by Morocco began.

Many of the Saharawi people, especially women, children and the elderly, fled to neighbouring Algeria where they were given refuge in an area of the Sahara Desert called La Hamada. 45 years later, those who remain in what was Western Sahara live under Moroccan occupation and regularly organise peaceful protests. Meanwhile nearly 200,000 Saharawi refugees still live in the harsh desert conditions, unable to work or farm and totally reliant on humanitarian aid. They are also unable to leave and begin a new life elsewhere as they have no nationality and therefore no identity documents, despite the UN recognising their right to self-determination as far back as 1979.

Valencia City Council showed its support for the Saharawi people on this, the 45th anniversary of the proclamation of the Saharan Arab Democratic Republic, along with other smaller towns and cities across the region.

Families from the Valencia region also participate in the programme of bringing children to Spain in the hottest summer months to give them some respite from the desert heat. Those stays, however, are just another victim of Covid-19 and this year’s programme has been cancelled as it was in 2020.

It was announced on Tuesday that in the coming weeks there would be a mass vaccination programme of teaching staff under the age of 55 using the AstraZeneca/Oxford jab. The news will be welcomed by teachers who are experiencing one of their toughest years, having to teach while wearing face masks and control students who are becoming ever more disruptive.

Around 100,000 teachers in state, private and concertada (state-financed, privately-run) schools will be vaccinated in phase two of the plan. Valencian education minister Vicent Marzà said that teachers had always been a priority group for the government and reiterated his belief that classrooms are safe spaces as well as being good at ‘detecting and containing the virus’.

Meanwhile, however, Valencian president Ximo Puig has recommended cancelling the planned school break on the days when Valencia’s Las Fallas festival and Castellón’s Magdalena festival would have been held. His argument is that if students aren’t in class on those days they may be tempted to meet friends and family socially, which could potentially lead to an increase in infection rates as has been seen following previous long weekends and holidays.

The Valencia health minister Ana Barceló will meet with Valencia city mayor, Joan Ribó, next week to discuss the matter. There will also be a special meeting of the city’s school council, but their decisions usually go in line with recommendations from the health department.

Unsurprisingly, teachers’ unions have come out against the proposal, with Stepv, the largest teaching union for the public sector, saying it would be ‘a new overload of work for teachers’.

The decision, of course, does not rest with Puig himself, instead each town and city council will decide if the non-school days prior to 19 March are to be kept as holidays or not. The holiday of San José, however, on 19 March is not affected and will be observed across the region for both workers and school children.

Holiday bookings surge with Spain as a top destination, after UK’s plans to relax lockdown