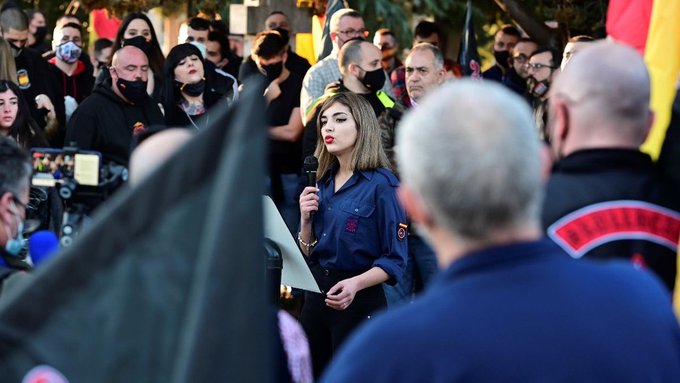 Prosecutors in Spain have opened an investigation into anti-Semitic comments made at a rally held in Madrid last weekend.

The incident took place on Saturday when 300 people gathered at La Almudena cemetery in honour of the División Azul. A military unit, the ‘Blue Division’ was comprised of volunteers sent by dictator Francisco Franco to support Hitler’s invasion of the Soviet Union during the Second World War.

After marching through the streets of Madrid, participants gathered at La Almudena cemetery, where speeches criticising the Jewish community and supporting Nazi ideology were delivered. The anti-Semitic comments under investigation, however,  are the particular words spoken by Isabel Medina Peralta.

Aged 18, Peralta addressed the crowd exclaiming that ‘it is our supreme obligation to fight for Spain and for a Europe which is now weak and liquidated by the enemy, the enemy that has always been the same, although wearing different masks: the Jew. Because there is nothing more precise than this statement: the Jew is to blame’.

Diplomatic protests by Germany, Russia and Israel followed the rally, claiming that the discourse made at an event in honour of the pro-Nazi Blue Division would be unthinkable in any other EU country.

Speaking out via Twitter, the Israeli ambassador in Spain, Rodica Radian-Gordon, wrote ‘anti-Semitic proclamations made in the homage to the Blue Division in Madrid are disgusting and cannot have a place in a democratic society’. The ambassador continued by stating ‘education and learning the truth about history is the way to prevent the past from repeating itself’.

The Madrid regional government and the Federation of Jewish Communities of Spain (FCJE) have also criticised the event before the public prosecutor. The latter stating that it is ‘unconscionable in a country with rule of law and full democracy for these serious accusations to go unpunished’.

Regional justice chief Enrique Lopez has ordered prosecutors to open an investigation to discover whether the speeches constituted a hate crime. The region’s prosecutors confirmed they are pursuing a ‘criminal investigation to gather information about the anti-Semitic statements’ which could constitute an offence relating to the exercise of fundamental rights and public freedoms.

Following the outcry regarding her speech, Twitter has since suspended Peralta’s account for violating the rules of use.

About 300 Neo-Nazis marched through Madrid to pay tribute to the Blue Division, the Spanish volunteers who fought alongside the Nazis in WWII.

We support the Jewish community in 🇪🇸 & call on the authorities to take a stand against extremism of all kinds.https://t.co/UhPbjMmUMA

Amazing. Such ignorance and hate amongst one so beautiful to behold. Why are the bad people always so eager to look good in public? They hide their evil. I feel dirty now.