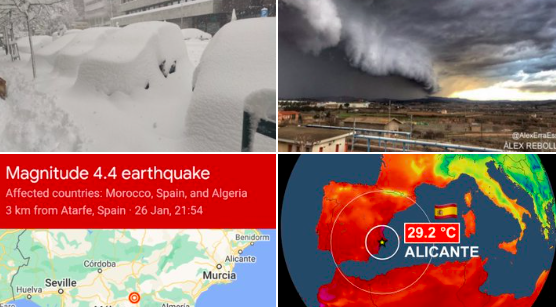 Spain has experienced extreme weather conditions across the country over the last fortnight, during a highly unusual period of record-breaking high and low temperatures, snowfall and earthquakes.

Scottish meteorologist Scott Duncan tweeted this week about the remarkable statistics, asking: ‘Spain, you ok?’ Duncan specifically highlighted Alicante and the surrounding area as having experienced soaring temperatures over the last few days, with a daily average temperature more reflective of June or July, rather than January. ‘January has been one heck of a rollercoaster for our Spanish friends,’ tweeted Duncan.

On Thursday, Alicante recorded a daily average temperature that matched the previous January record of 29.2°C. Just two weeks ago, Madrid experienced freezing temperatures of -25°C and levels of snowfall that haven’t been seen for over 50 years. The province of León recorded the lowest temperature in the country at -35.6°C.

Alicante 🇪🇸 just recorded +29.2 °C today. Not so long ago, some parts of Spain were sub -20 °C with deep snow cover. January has been one heck of a rollercoaster for our Spanish friends. pic.twitter.com/IpUTOpIizF

The unusually harsh wintry weather was enjoyed by many as a novelty, but also created problems for travel and health, with the elderly instructed to stay at home. Sadly, it was reported that at least seven people died across Spain as a result of the freezing temperatures. Madrid and seven other regions (Castilla-La Mancha, Castilla y León, Asturias, Andalusia, Aragón, La Rioja and Navarra) were finally classified as disaster zones by the Spanish government, as a result of Storm Filomena – a category that is set to provide emergency subsidies and other support measures.

Also last week, 49 earthquakes were recorded in the Granada province in southern Spain. The largest of these, in the city of Granada itself, was measured at 4.3 on the Richter Scale and caused some local residents to be alarmed, fleeing the city to head to the coast, despite the Coronavirus restrictions and curfews in place. Residents have also been leaving the city centre to sleep in their cars in open spaces, fearing buildings in the city to be at risk of damage through further earthquake activity.

But what is causing such meteorological and geological extremities? The earthquake activity has been blamed on the recent breaks along fault lines underground, with movements of between 4 and 5 milimetres a year between the Eurasion and African plates. In geological terms, that’s quite a big change.

Duncan explained in his tweets that the unusual variations in temperature across Spain were partly due to Storm Filomena – but he tweeted yet again on Sunday to ask: ‘Anything else before the month comes to an end in a few hours?’

It is not clear what has been causing a pleasant blast of summer heat in Alicante, but the intensity of the temperature is eye watering, and warmer temperatures have also been experienced throughout the Valencia region over the last week.

The impact of Filomena on changing temperatures and weather conditions has caused a phenomenon that may not be repeated for some time. The timing of the storm and the resulting big freeze, coinciding with rising temperatures and earthquakes in other areas of Spain has been highly unusual.

Whatever the exact reasons for these wild fluctuations and extreme weather across the country, it’s a crazy anomaly that has got many citizens talking about the weather over the last week. Hopefully there will be some calmer weeks ahead and some feeling of normality. Whatever ‘normal’ is these days.

Anything else before the month comes to an end in a few hours? pic.twitter.com/1t1byu4IDg