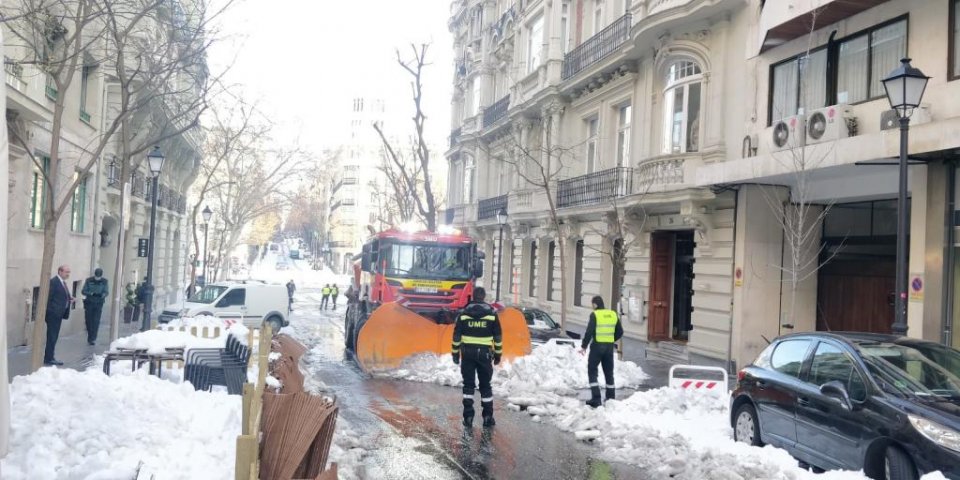 The Spanish government has classified Madrid and seven other regions struck the hardest by Storm Filomena last week as disaster zones, a category that will provide emergency subsidies and other support measures. Castilla-La Mancha, Castilla y León, Asturias, Andalusia, Aragón, La Rioja and Navarra have also been classified as disaster zones.

The precise details of the subsidies and support have not yet been decided, and each region needs to be assessed individually. The authorities in Madrid and in Castilla-La Mancha had been pushing for disaster zone classification.

The news came as the Madrid regional government also warned that rain predicted from Wednesday could bring flooding and further chaos to the capital. ‘The rains predicted by AEMET [the state weather agency], although moderate, are likely to cause floods when all the ice begins to melt,’ the regional government said.

Storm Filomena delivered the heaviest snowfall in decades and caused an estimated 1.4 billion euros in damage to Madrid, according to a preliminary estimate from City Hall, although opposition parties have disputed the figure. Spain’s Ecological Transition Minister Teresa Ribera said that Madrid City Council’s figure appeared ‘off-track if we look at accredited [damage] estimates of previous weather events in the Mediterranean, where figures are vastly different from those under consideration in Madrid’.

Fallen trees and snow hardening into ice blocks in Madrid during the record low temperatures that followed the storm, blocked roads and many train lines, cutting off supplies to Madrid and leaving many supermarket shelves empty. A huge mission to clear the roads involved thousands of police, firefighters and military personnel from the Unidad Militar de Emergencias (UME) – although many minor roads remain blocked.

In many areas of Madrid, rubbish bins have also been overflowing, with the city authorities unable to access with garbage trucks. Most schools, closed since Monday last week, were expected to re-open on Wednesday.

Two of the capital’s biggest parks, El Retiro and Casa de Campo, will remain shut for two months because of the damage to trees, mayor José Luis Martínez Almeida said. The city has estimated that 70% of trees in the Retiro have been damaged.

Click here for all our reports on Storm Filomena.