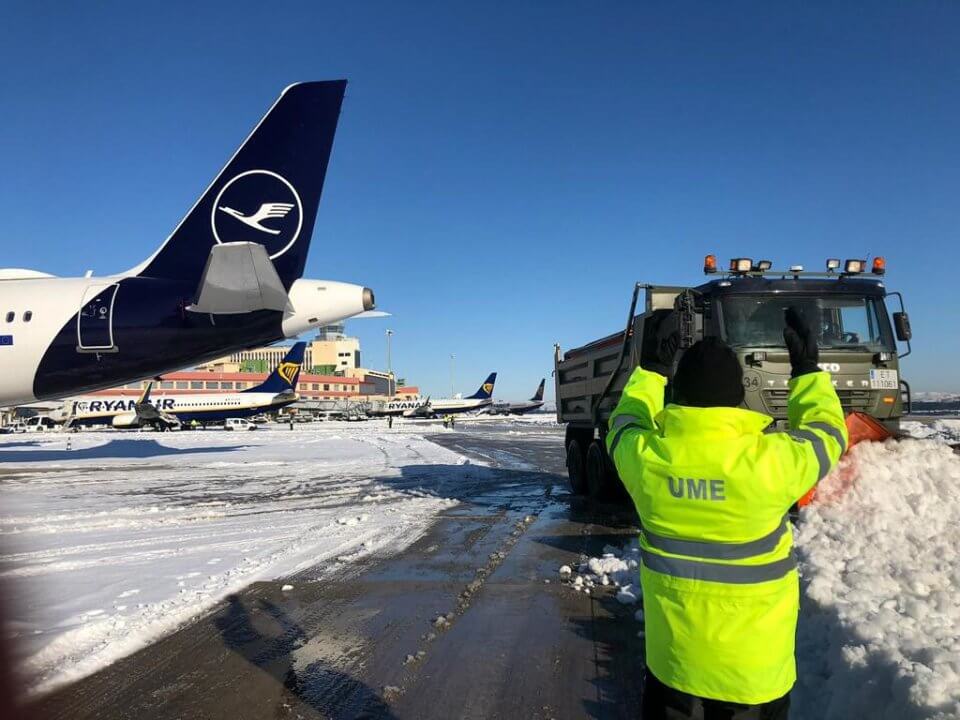 Madrid and other areas of central Spain are still trying to return to normality after a 50-year record snowfall from Storm Filomena paralysed large parts of the country – with record freezing temperatures and ice now causing disruption. The blizzards have also hampered deliveries of the Covid-19 vaccine.

At least four people have died from the effects of Storm Filomena, with the snow also trapping over 2,500 people in their vehicles, some of them for up to 24 hours.

Schools, courts and museums were closed throughout central Spain on Monday – with Madrid since announcing the suspension of face-to-face tuition across the region until Monday 18 January, with online tuition resuming from Wednesday. President of Madrid’s regional government, Isabel Díaz Ayuso, said that it was ‘necessary to fix the damage and guarantee a safe return to the classrooms after the snow and cold’.

Temperatures are still expected to drop to -11C in large parts of the country, according to the national AEMET weather agency, with the authorities urging people to exercise extreme caution. The regions of Castilla-La Mancha, Castilla y León and Aragón – as well as the Madrid region – remain on red alert for the freezing temperatures on Tuesday. Early morning record low temperatures today have shown -25.2C in Molina de Aragón (Guadalajara), -21.3C in Calamocha (Teruel) and -21C in the city of Teruel itself.

Two homeless men have been found dead on the streets of Barcelona from the low temperatures. According to Fundació Arrels, the men were aged 32 and 38 years old. Barcelona City Council has since stated that one of the men had refused an offer to stay at a shelter.

After the weekend blizzard delivered over 50 cm of snow in central areas of Spain, 1,300 snow ploughs were deployed, with other trucks then spreading 246,000 tons of sand and de-icing agents on 30,000 km of roads. Many roads, however, are still blocked. On Tuesday morning there were still traffic blocks on 116 roads, with snow chains mandatory on a further 210 roads.

During Monday in Madrid, civil protection and military battalions of the UME (the Unidad Militar de Emergencias) aided by snow ploughs and bulldozers, managed to clear lanes on many roads for ambulances and emergency vehicles – although many of the city’s main services remained closed. The army deployed 1,100 troops, of whom 600 were part of the UME, in Madrid, Aragón and Toledo. Many citizens with four-wheel-drive vehicles were also volunteering to take people to hospitals as ambulances struggled to cope with demand and the icy weather conditions.

‘We have some very complicated days ahead until the cold snap subsides,’ Spain’s Interior Minister Fernando Grande-Marlaska said during a televised press conference on Monday. ‘It is necessary to postpone any movement that is avoidable, for safety and in order to not interrupt the works in the road network.’

Madrid’s underground Metro system became the only viable way to commute to work in the capital during Monday, leading to scenes of overcrowding and where social distancing was impossible. Commuter trains in Madrid and the high-speed AVE railway between Barcelona and Madrid have since resumed, but with curtailed services.

Madrid airport – officially known as the Adolfo-Suárez Barajas Airport – had been closed since Friday evening, but saw a dozen flights take off or land on Monday. By Tuesday it was still not back to normal activity, although many more flights have now resumed at Terminal 4.

Spanish Prime Minister Pedro Sánchez tweeted on Tuesday morning: ‘Thanks to all the people who have been working tirelessly since last week to alleviate the effects of Filomena and the cold front. And thank you, too, to those who have contributed selflessly in many parts of our country. Your example makes us better.’

A further batch of 350,000 doses of the Pfizer-BioNTech Coronavirus vaccine arrived at six different airports in Spain during Monday, but the doses destined for Madrid had to be diverted to the northern city of Vitoria.

The central government’s representative in Madrid, José Manuel Franco, told Onda Cero radio that the pharmaceutical company was working hard to ensure the arrival of the capital’s doses overground to a logistical centre. Authorities said that police escorts would help the vaccines get through the snow-blocked streets.

ALSO READ: Snow and Storm Filomena cause havoc across Spain