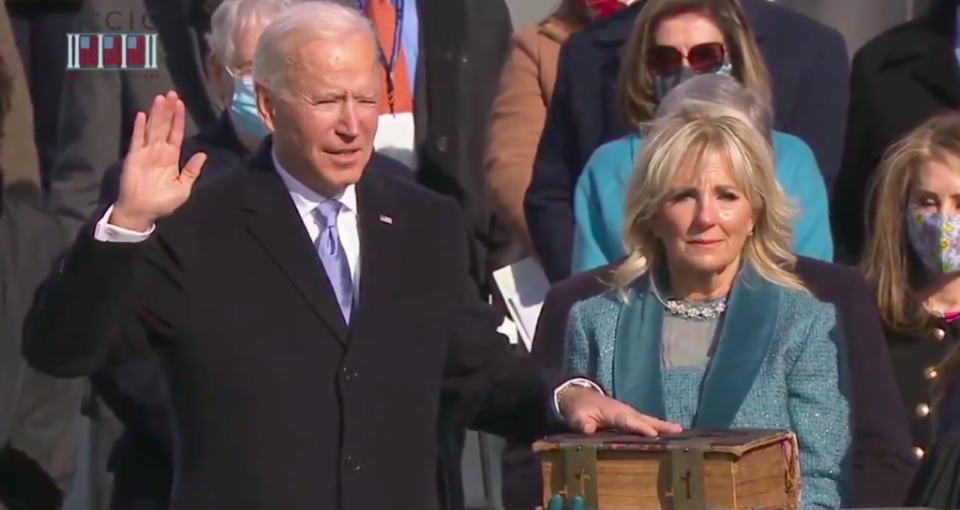 Joe Biden called on American citizens to overcome divisions as he was sworn into office on Wednesday as the 46th President of the United States, vowing to end the ‘uncivil war’ in a deeply divided country.

Aged 78, Biden becomes the oldest president to take office in US history, while Kamala Harris becomes the first female vice president, the first black woman and the first Asian-American to hold the office.

Biden becomes president at a time of national tumult and uncertainty, just two weeks after a mob of Donald Trump supporters opposing his election stormed the US Capitol. The United States is also reeling from a battered economy and the Covid-19 pandemic that has so far claimed the lives of 400,000 Americans.

Trump was not present for the swearing-in. However, former US presidents Barack Obama, George W. Bush, and Bill Clinton attended with their wives, Michelle Obama, Laura Bush and Hillary Clinton.

After a bitter election campaign marked by Trump’s unfounded allegations of election fraud, Biden struck a conciliatory tone in his inauguration speech, asking Americans who did not vote for him to give him a chance to be their president as well.

‘To overcome these challenges to restore the soul and secure the future of America requires so much more than words,’ he said. ‘It requires the most elusive of all things in a democracy: unity. We must end this uncivil war that pits red against blue, rural versus urban, conservative versus liberal. We can do this – if we open our souls instead of hardening our hearts.’

‘Here we stand, just days after a riotous mob thought they could use violence to silence the will of the people, to stop the work on our democracy, to drive us from this sacred ground,’ Biden also said, referring to the storming of the US Capitol. ‘It did not happen; it will never happen. Not today, not tomorrow, not ever.’

The Covid-19 pandemic led to many restrictions during the inauguration ceremony and celebrations that normally follow. However, a number of leading artists, including Lady Gaga, Jennifer Lopez and Tom Hanks, still took to the stage during the ceremony.

ALSO READ: Opinion: Reflecting on the mob riot at the US Capitol