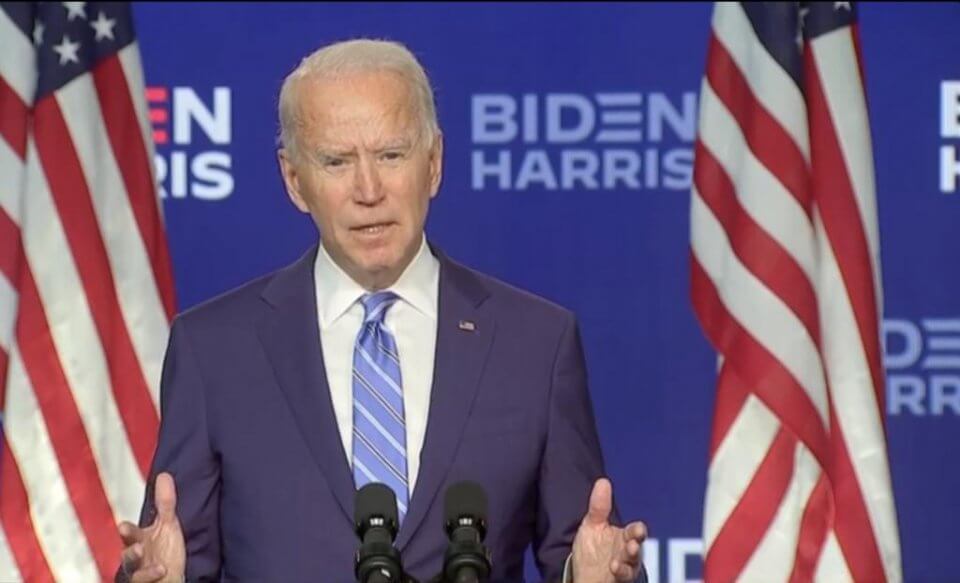 Joe Biden has won the election to become 46th President of the United States. However, Donald Trump still claims that the ‘election is not over’ and his legal team is disputing the results [see earlier report below].

President-elect Biden urged unity on Saturday and promised ‘a new day for America’ in his first national address since he won the election.

In his hometown of Wilmington, Delaware, Biden vowed ‘not to divide but to unify’, and reaching out directly to Trump supporters, declared ‘they’re not our enemies, they’re Americans’.

Kamala Harris, who will make history as the country’s first female and first black vice president, said, ‘Joe is a healer.’

‘When our very democracy was on the ballot in this election, with the very soul of America at stake, and the world watching, you ushered in a new day for America,’ said Harris.

Biden, who turns 78 later this month, will be the oldest person to become president when he takes office on 20 January.

Many world leaders on Sunday cheered Biden’s election as a chance to enhance co-operation on climate change, the Coronavirus pandemic and other issues after four years of Trump’s rejection of a number of international alliances.

Spanish Prime Minister Pedro Sánchez tweeted: ‘The American people have chosen the 46th President of the United States. Congratulations Joe Biden and Kamala Harris. We wish you good luck and all the best. We are looking forward to cooperating with you to tackle the challenges ahead of us.’

British Prime Minister Boris Johnson, a Trump ally, said he looked forward to ‘working closely together on our shared priorities, from climate change to trade and security’.

Our earlier report from Friday 6 Nov:

Joe Biden has now moved ahead of Donald Trump in two key ‘battleground states’, as the race for the White House goes to the wire. Biden now has the lead in Pennsylvania with 98% of votes counted, according to reports.

The Democrat candidate had also jumped into first place in the Republican-held state of Georgia. However, it has since been announced by Georgia’s secretary of state, Brad Raffensperger, that there will be a recount there, due to the margin being only a few thousand votes.

‘With a margin that small, there will be a recount in Georgia,’ said Raffensperger. ‘The final tally at this point has huge implications for our entire country.’ At the time, there were reportedly 4,169 ballots left to count, with Biden leading by 1,098 votes. It is the law in Georgia that a recount must take place if candidates are within 0.5% of each other.

In the race to get the 270 electoral college votes required, Biden is currently on 253. If he picks up 20 more through winning Pennsylvania, he will win the White House and make Trump the first one-term president since George HW Bush.

It has also been reported that the US Secret Service has cleared the ‘air space’ above Biden’s home, suggesting that his presidency is imminent.

Donald Trump’s team, however, are insisting the ‘election is not over’.

Matt Morgan, the general counsel for the Trump campaign, issued a statement on Friday, stating: ‘This election is not over. The false projection of Joe Biden as the winner is based on results in four states that are far from final. Georgia is headed for a recount, where we are confident we will find ballots improperly harvested, and where President Trump will ultimately prevail. There are many irregularities in Pennsylvania, including having election officials prevent our volunteers legal observers from meaningful access to vote counting locations. We prevailed in court on our challenge, but were deprived of valuable time and denied the transparency we are entitled to under state law.’

‘In Nevada,’ the statement continues, ‘there appear to be thousands of individuals who improperly cast mail ballots. Finally, the President is on course to win Arizona outright, despite the irresponsible and erroneous “calling” of the state for Biden by Fox News and the Associated Press. Biden is relying on these states for his phony claim on the White House, but once the election is final, President Trump will be re-elected.’

At around 2am on Wednesday 4 November local time in Washington DC, Donald Trump had addressed voters from the White House. With millions of legitimate votes left to count, he declared an unsubstantiated victory.

‘Frankly, we did win this election,’ he claimed, speaking from a podium in the White House East Room in front of around 100 guests, including his family, and suggesting that election ‘fraud’ had occurred. ‘This is an embarrassment to our country,’ he said, adding that he planned to go to the US Supreme Court to fight the election results. He had started his speech by saying, ‘We were getting ready for a big celebration. We were winning everything.’

Over the next 48 hours, following his speech in the White House, Donald Trump sent a numbers of tweets, several of which were flagged by Twitter as ‘misleading’, after he suggested rivals were trying to ‘steal’ the election.

‘We are up BIG, but they are trying to STEAL the Election,’ Trump had tweeted, shortly after Biden told supporters he expected to win. On Thursday, Trump tweeted: ‘STOP THE COUNT!’

Sky News has reported that election officials across the USA have said they fear for their staff’s safety amid threats and harassment from protestors, spurred by Trump’s claims of a corrupt election.