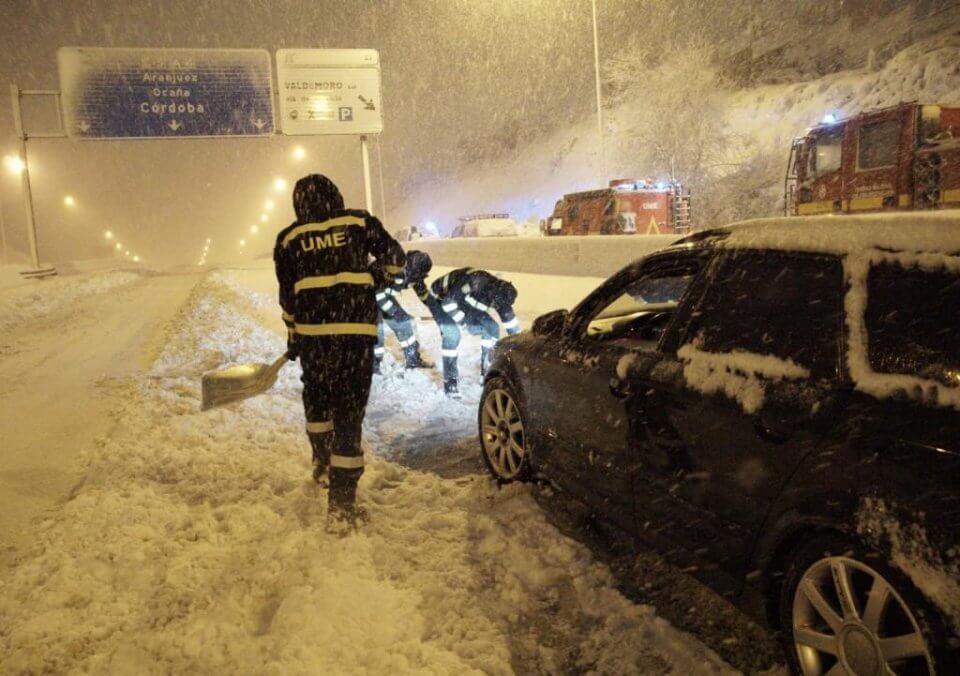 Storm Filomena has brought the heaviest snowfall ‘for 80 years’ in Spain combined with an on-going, persistent blizzard, leaving thousands of drivers trapped in vehicles and the closure of Madrid airport.

The Madrid region and other parts of central Spain have activated for the first time a red weather alert, the highest, as well as calling in the military to rescue people trapped in private vehicles and public transport, including at bus and train stations. Volunteers from the Red Cross have also taken food to trapped lorry drivers on roads around Madrid.

Spain’s national weather agency, AEMET, had originally said that some regions would be receiving more than 24 hours of continuous snowfall – warning that up to 20cm could accumulate in large parts of the country. However, the level has reached more than 50cm, even in urban areas. The agency said that it was due to the unusual combination of a cold air mass stagnant over the Iberian Peninsula and the arrival of the warmer Storm Filomena from the south. The storm is expected to move northeast throughout Saturday, where Catalonia is now also on high alert.

More than 1,000 vehicles became trapped, mostly on the city of Madrid’s ring road, as well as on the main motorway that leads from the capital to the south, toward Castilla La Mancha and Andalusia.

Airport operator AENA said that Madrid airport – officially known as the Adolfo Suárez Madrid-Barajas International Airport – would remain closed throughout Saturday due to the blizzard, with workers still trying to keep the runways clear of snow.

Railway operator Renfe said that all trains into and out of Madrid, both commuter routes and long-distance passenger trains, as well as railway lines between the south and the northeast of the country, had also been suspended. Madrid city mayor José Luis Martínez Almeida described it as ‘the worst storm in 80 years’.

In Toledo, south of Madrid, and the capital of the Castilla La Mancha region, authorities called for help from the Spanish military to clear roads, and prohibited all circulation of vehicles without winter tyres or snow chains. Albacete, Cuenca, Guadalajara, Valencia, Castellón, Tarragona, Teruel and Zaragoza were also expected to see over 20cm of snow.

In the archipelago of the Canary Islands, rainfall and strong winds have resulted in giant waves, and where emergency services rescued 65 people on Friday from a ferry that ran aground while trying to approach a dock in the Gran Canaria island.

The weather has also affected La Liga fixtures. Athletic Bilbao said that its flight to the capital to play at league leader Atlético Madrid was forced to return to Bilbao airport following the closure of Madrid airport.

Meanwhile social media has shown images of skiers gliding through the central Puerta del Sol plaza in Madrid, and even a man on a sledge driving a pack of dogs through the streets of the capital.