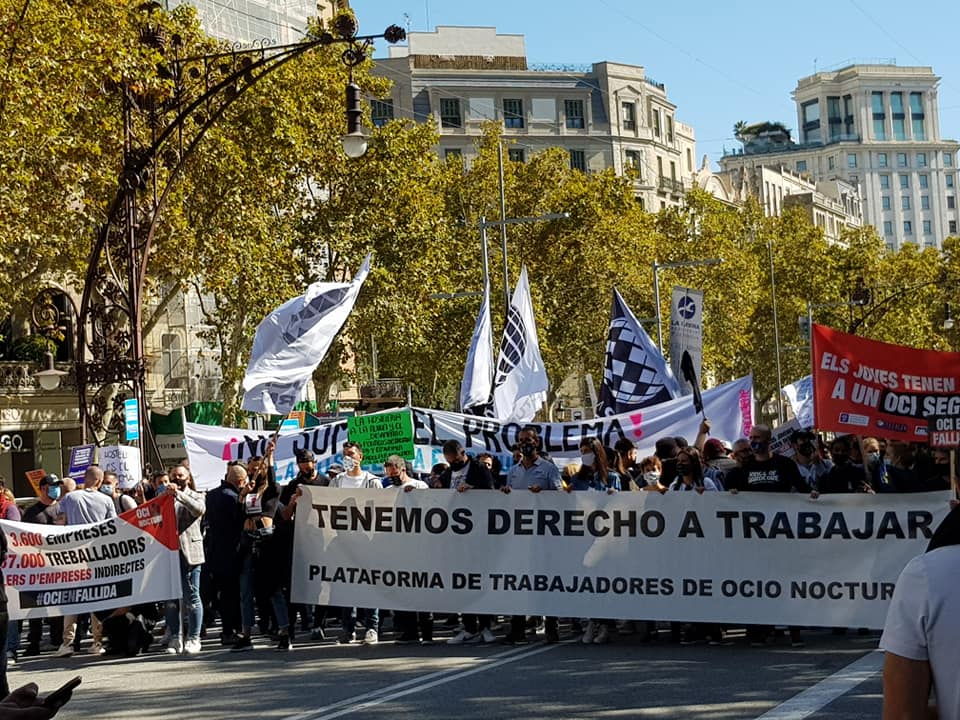 Protests took place on Friday and over the weekend in Barcelona, as well as in other cities and towns across Catalonia, against the Catalan government’s decision to close all bars and restaurants for at least 15 days. The measures came into force on Friday as part of other restrictions to try and control the spread of Coronavirus (Covid-19) in Catalonia.

All bars and restaurants have been closed, as well as casinos and gambling halls, with only takeaway and delivery services being allowed. Shops have also had to reduce to a maximum 30% capacity, cinemas and theatres to 50%, whilst other measures include the suspension of all trade fairs – and with public parks having to close by 8pm. Hair salons can remain open but beauty clinics are also closed.

The protests against the closure of bars and restaurants have been organised by various associations in the hospitality sector, including the Restaurant Guild, Barcelona Commerce, and employers’ organisations Foment and Pimec. Many individuals who work in Barcelona’s normally vibrant nightlife sector also took to the streets over the weekend. Young citizens who don’t work in the sector also rallied, with many protesting for the ‘right to a safe nightlife and social life’.

Eggs and plates were thrown at the front door of the Catalan government’s headquarters in the Plaça Sant Jaume in central Barcelona on Friday, as around 1,000 restaurant, bar and café owners chanted, ‘We want to work’. The crowds held placards claiming that ‘Restaurants are not the problem’ and ‘Government, resign!’ A further rally took place on Saturday in and around one of Barcelona’s main shopping avenues, Passeig de Gracià.

Speaking at the rally on Friday, Roger Pallarols of the Restaurant Guild expressed ‘outrage’ within the sector at the Catalan government’s new ruling, and called for more ‘reasonable’ measures, stating that 9,000 restaurateurs in Barcelona will lose income but still have outgoings. He estimates that 80,000 workers face temporary unemployment.

The Catalan government has promised funds of €40m for businesses affected, but according to the hospitality associations, this won’t be enough to cover losses. Antoni Cañete, the Secretary General of the employers’ organisation Pimec, has claimed the impact of the measures will be €780m – with 210,000 workers and 44,000 establishments affected ‘The €40m announced represents just 5.1% of the losses,’ he said.

Pere Aragonès, the vice president of the Catalan government and currently acting as the interim president following Quim Torra being barred from office, has asked Spanish prime minister Pedro Sánchez for a tax break for businesses affected by the new Covid-19 measures.

Aragonès believes a moratorium on VAT, corporation tax and social security contributions is ‘essential’, insisting that ‘necessary measures’ must be taken to prevent solvent companies from having to close completely, due to the actions taken to halt the spread of the virus.

‘It would not make any sense’ for the state to continue collecting taxes ‘normally’ when many companies cannot operate regularly due to the measures, Aragonès has said, also calling for quick action from Sánchez.