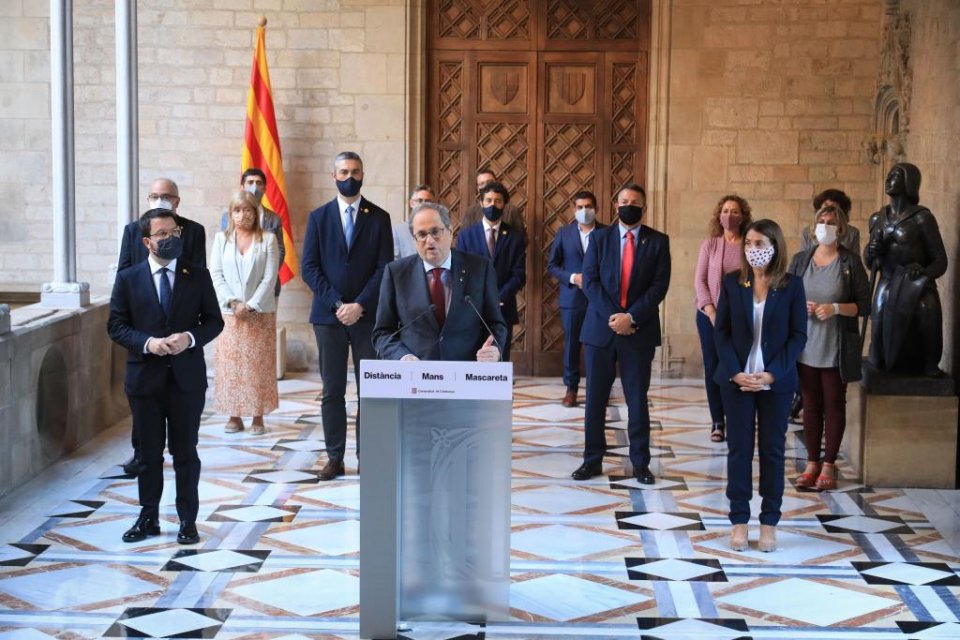 Quim Torra has appealed his ban from office before Spain’s Constitutional Court, and also pledged to seek ‘justice in Europe’ after being disqualified from the post of Catalan president by the Spanish Supreme Court. It follows the court’s ruling to uphold his 18-month ban from public office for ‘disobedience’.

The disobedience is for failing to remove yellow ribbons and banners calling for the release of the jailed Catalan leaders from the Catalan government’s headquarters during an electoral campaign, as ordered by Spain’s Electoral Authority (JEC).

Torra’s lawyer, Gonzalo Boye, said in an interview with Rac1 radio on Tuesday that they have requested that Torra’s disqualification be provisionally suspended while a final decision is made.

Spain’s Constitutional Court can only either consider the appeal and suspend Torra’s ban, or dismiss it, Boye said, which would then prompt him to take the case to the European judiciary – as Torra stated he would do on Monday.

‘Some judges, not the Catalan people, decided that I can no longer be president,’ Torra said in a televised address [see video link below] on Monday afternoon.

‘No unjust law applied for the purpose of revenge against those who defend human and universal human rights will ever be able to defeat democracy. And I assure you that the irregularities committed to overthrow another president will be judged in Europe,’ said Torra.

Stating he didn’t ‘accept’ the ruling, Torra also hinted at a new Catalan election in the ‘coming months’. He said the election should serve as a plebiscite on the mandate of the 2017 referendum on independence.

During his address, Torra was accompanied by his government’s ministers, including vice president Pere Aragonès, who is expected to act as an interim president until Catalans head to the polls.

You can watch Torra’s institutional address (in English) here:

After the news broke on Monday that the Spanish Supreme Court had upheld the ruling to remove Quim Torra from office, many parties and figures moved quickly to condemn the decision. Others applauded the ruling.

As expected, Torra’s party Junts per Catalunya (JxCat) heavilly criticised the ruling, as did their coalition partners, the Esquerra Republicana (ERC) party.

JxCat called the ruling a new ‘democratic scandal’, that confirms Spanish ‘repression’, and shows that there is no ‘political answer’ to resolving the Catalan crisis. The ERC said that barring Torra from office was an ‘attack’ on democracy. Spokesperson Marta Vilalta said that Torra ‘defended freedom of expression’ and that the Supreme Court decision was another example of Spain’s fight against the Catalan independence movement.

The former Catalan president, Carles Puigdemont, said that Torra’s forced removal from office was a result of Spain acting as a ‘corrupt state from the royal family to the judiciary’. ‘Once again Spain interferes with our democratic institutions,’ he tweeted. Puigdemont, who picked Torra to be his successor, is now an MEP, exiled in Belgium and still wanted by Spain for his role in the 2017 independence push.

Inés Arrimadas, leader of the Ciudadanos (Cs) party, however, said that, ‘Public spaces are for everybody and a politician cannot break the law to flood us with separatist propaganda. Justice has been served.’

The far-right Vox party, that acted as the ‘popular prosecutor’, in Torra’s Madrid hearing, celebrated his disqualification and even claimed credit for it. ‘Torra disqualified, once more thanks to Vox and our legal team,’ spokesperson Iván Espinosa de los Monteros wrote.

Meanwhile, several protests took place across Catalonia on Monday evening against the ruling to disqualify Torra, including in Barcelona.

In some of the demonstrations called by the pro-independence CDR groups (Committees in Defence of the Republic), protestors built barricades, burnt trash cans and threw rubbish – including pigs’ heads – at the Catalan police (the Mossos d’Esquadra). Back in 2002, a pig’s head was thrown onto the pitch at the Portuguese footballer Luis Figo, by Barcelona fans who felt ‘betrayed’ that he had left their club to play for Real Madrid.

On Monday evening hundreds of demonstrators gathered on Jardinets de Gràcia, in Barcelona, before later moving towards the Catalan Parliament – where they forced open the gates of Parc de la Ciutadella. However, the police blocked the parliament’s gates and no clashes were seen. Officers also managed to disperse the protestors in Barcelona and the rally came to an end at around 11pm.

See Tweets below of pigs’ heads thrown at the police: