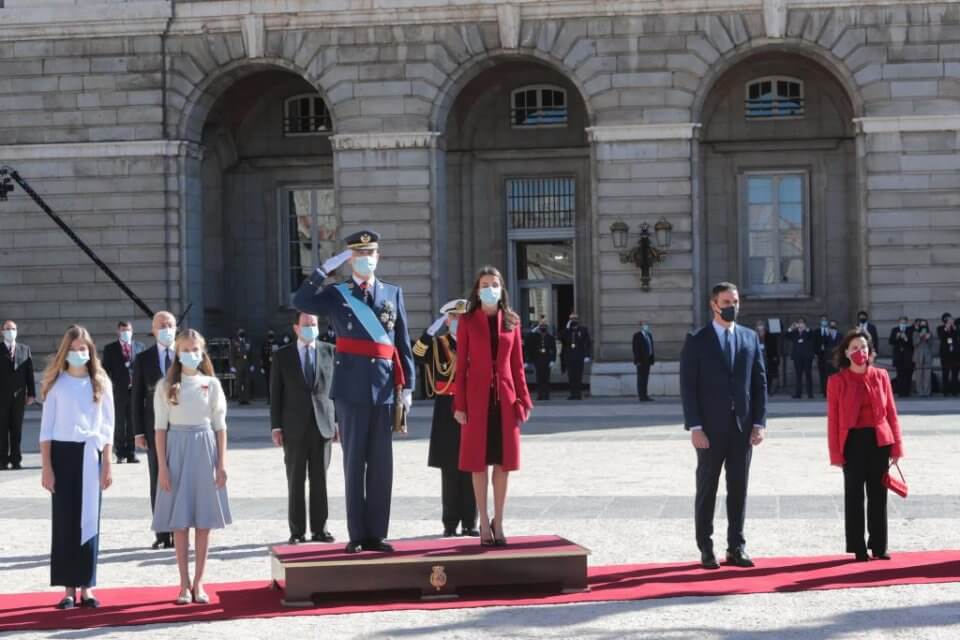 Spain celebrated its National Day on Monday, with king Felipe VI presiding over a ceremony in Madrid – but with the day also seeing protests against the coalition government organised mainly by the far-right Vox party.

The Fiesta Nacional de España commemorates the anniversary of Christopher Columbus’s first arrival in the Americas. Normally a large military parade takes place along the Paseo de la Castellana in Madrid, but this year it was curtailed due to the Coronavirus (Covid-19) pandemic. Instead, the event that took place in the ‘Patio de Armas’ of the Royal Palace in Madrid also paid tribute to civic organisations, alongside military, police and emergency service workers (SAMUR), and the Spanish Legion that celebrates its 100th anniversary.

The presidents of all Spain’s regional governments also attended, with the exception from the Basque Country, Catalonia, Aragón, Murcia and the Balearic Islands.

But the day also saw hundreds of cars and motorbikes paraded through Madrid and other Spanish cities in protests called by the far-right Vox party, demanding that Prime Minister Pedro Sánchez and his coalition government resign over their handling of the pandemic – and specifically with anger against the state of alarm imposed upon Madrid since Friday.

In late May, the far-right Vox party organised a previous car protest, with party leader Santiago Abascal claiming at the time that the government of Sánchez was ‘directly responsible for the worst management of this [Coronavirus] crisis on the entire planet.’

The Vox party is Spain’s third largest party, with 52 seats in the 350-seat parliament, after the general election of 10 November 2019. A debate for a no-confidence motion filed by Vox against the Spanish government is reportedly set to take place before the end of October. It is certain to fail, however, as it has not attracted support from any other parties, not even from the right-wing People’s Party (PP) and main opposition party.

In Madrid on Monday, hundreds of vehicles motored along the Paseo de Castellana instead of the traditional military parade, sounding horns in protest and waving Spanish flags. Car protests also took place in Valencia, Seville and Malaga, according to images on social media.