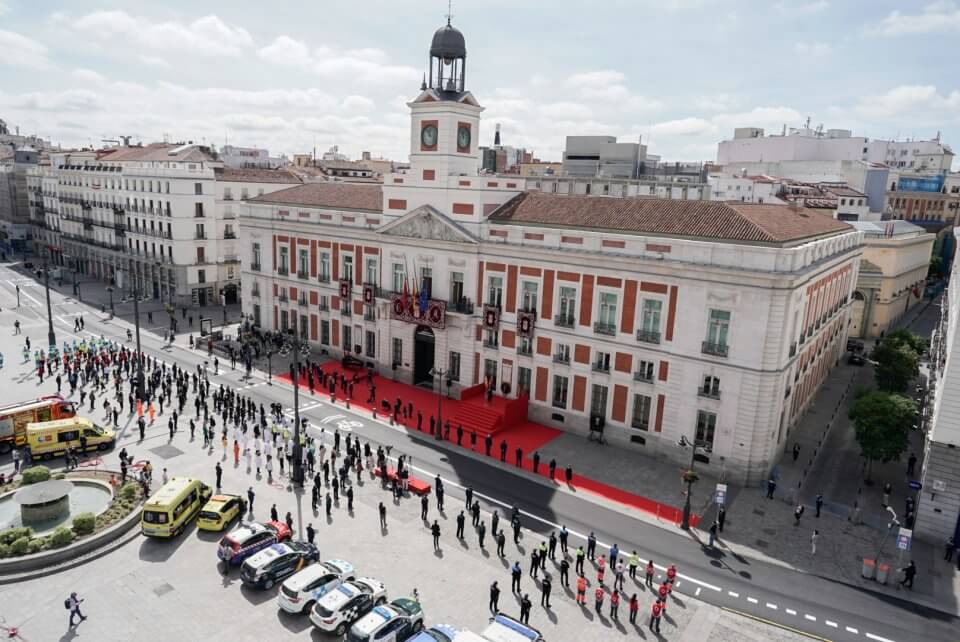 New restrictions to combat the spread of Coronavirus (Covid-19) came into force in the city of Madrid and nine other municipalities in the region from 10pm on Friday night – yet they are also being challenged in court by the Madrid authorities.

The new measures had been published in the Boletín Oficial del Estado (BOE) since Thursday, and follow the majority agreement reached between the Spanish government and the country’s 17 regional governments last Wednesday afternoon, at a meeting of the Inter-territorial Council of the National Health System. The new restrictions are being applied to communities that exceed 500 cases of Coronavirus per 100,000 inhabitants, have a positivity rate in tests higher than 10% – and an occupation of Covid-19 patients in intensive care units (ICUs) of above 35%.

With these criteria, 10 municipalities in the region of Madrid, including the city itself, had the restrictions imposed [see below for details] from 10pm on Friday.

The capital city of Madrid is affected, as well as Parla, Fuenlabrada, Alcobendas, Torrejón de Ardoz, Getafe, Alcorcón, Leganés, Móstoles and Alcalá de Henares, which are all municipalities in the region of Madrid.

The Madrid regional health chief, Enrique Ruiz Escudero, had stated on Thursday that the new restrictions lacked any ‘legal status’ because not all of the regions had voted in favour of the measures.

The Madrid regional government led by Isabel Díaz Ayuso announced that it would implement the measures from 10pm on Friday, but it has also filed an appeal on Friday at Spain’s High Court, the Audiencia Nacional.

‘This region is not rebelling,’ said Ayuso. ‘We will obey, but we will go to the courts to defend the legitimate interests of Madrileños and ensure that the measures are adjusted to regulation, to reality, and that they are objective and fair.’

On Friday, after the measures were confirmed at a press conference in Madrid, Ayuso tweeted: ‘From tomorrow, you can get to [the city of] Madrid from Berlin but not from Parla [a town in the region]. Thanks for the chaos, Pedro Sánchez.’

Last week, Madrid’s former health chief Yolanda Fuentes, who had resigned in May over a disagreement with the region about its Coronavirus strategy, tweeted a clip from the film Titanic of the captain shutting himself onto the bridge alone as the ship was sinking, with the hashtag: #Goodluck.

The restrictions that will come into place:

Firstly, mobility to and from the areas affected will be restricted, except those journeys that are suitably justified to visit care centres, to attend health services and establishments, for compliance with labour, professional, business and legal obligations, attendance at university, teaching and education centres, including nursery schools, and care for the elderly, children, dependent persons, those people with disabilities and particularly vulnerable individuals, among others.

Travel will be permitted on roads and highways that pass through these areas provided that the origin and destination are the same place. And residents may travel in the areas affected, provided that they respect the individual and collective measures established by the competent health authorities.

Furthermore, the participation in gatherings of people to develop any activity or event of a family or social nature, both on public thoroughfares and in public and private spaces will be limited to a maximum of six people, unless this includes people who cohabit a dwelling place, and except for labour or institutional activities, or other activities where specific limitations or measures are established.

At wakes, the maximum capacity will be of 15 people outdoors and of 10 people indoors, whether or not they cohabit. And participation at funeral processions and cremations will be limited to a maximum of 15 people.

In the case of establishments, shopping premises and other services open to the public, the maximum capacity will be of 50% and they must not open later than 10pm, except in certain specified cases.

As regards hotel and catering establishments, bars, restaurants and gaming premises, the maximum capacity will also be 50% indoors and 60% outdoors. Food and drink may not be consumed at the bar. And tables or groups of tables must maintain a distance of at least 1.5 metres between the chairs assigned to other tables or groups of tables. The maximum number of people that may sit at a table or group of tables will be six.

New customers must not be admitted after 10pm and premises must close by 11pm, except those services with home deliveries.

Academies, driving schools and unregulated private teaching and training centres not included in the scope of of a previous ministerial order of 9 June regarding education measures, will have a maximum capacity of 50%.

Sports installations, whether indoors or outdoors, will also have a maximum capacity of 50% indoors and 60% outdoors, and the practice of amateur group sports will be limited to a maximum of six people.

Regions in Spain with municipalities subject to the new criteria must also strengthen their capacities for the early detection and control of the disease. In general, all unnecessary movement and travel should be avoided in those municipalities where these measures are to be applied. Regional governments should also approve special plans for municipalities with less than 100,000 inhabitants with a high accumulated rate of new cases.