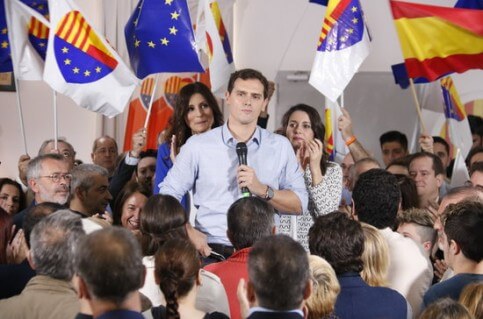 After clashes between Catalan pro-independence protestors with police forces following the Supreme Court verdict sentencing nine Catalan leaders to up to 13 years in prison, Spain’s unionist parties have called for exceptional security measures in Catalonia.

Albert Rivera, head of the Ciudadanos (Cs) party, has asked that Spain’s acting socialist (PSOE) prime minister Pedro Sánchez send more Spanish police officers to ‘protect Catalans’ ahead of a meeting between the two politicians that was set to take place on Wednesday evening at 7 pm.

Rivera also asked that Article 155 of the Spanish Constitution be applied in Catalonia, suspending self-rule and removing Catalan president Quim Torra from office, whom he compared to a ‘suicide driver at the head’ of the Catalan government.

Playing on the name of the anonymous organisation behind many of the protests, Tsunami Democràtic, Rivera also described the altercations as a ‘tsunami of violence’.

Ciudadanos (Cs) is not the only party to call upon Sánchez to implement harsher measures in Catalonia.

Pablo Casado of the People’s Party (PP) has demanded that he ‘act with determination’ when dealing with the unrest and that he implement the National Security Law.

Following a Tuesday morning meeting between Sánchez and Casado, the right-wing politician told the press that the Spanish prime minister was ‘improvising’ with his response to how events have unfolded in Catalonia.

The People’s Party (PP) politician believes the Sánchez should send Catalan president Quim Torra a warning, reminding him to comply with his ‘constitutional duties’, before implementing Article 155 if he refuses to do so.

ALSO READ: Protestors and police clash in Barcelona and other major towns

As for the pro-independence Tsunami Democràtic group, Casado said they were like a ‘kale borroka‘ armed urban guerilla group active during the violent years of the Basque independence movement.

Pedro Sánchez responded to Casado’s remarks by affirming that the Spanish government is prepared for ‘any possible scenario’ and that it ‘will act, if necessary, in a firm and proportionate manner’.

Sánchez also applauded the work of the security forces that have been attempting to contain unrest at protests and issued a ‘firm condemnation of the use of violence to frighten all citizens’.

This comes as unionist group Societat Civil Catalana (SCC) announced that it is organising a ‘mass protest’ in Barcelona on 27 October – two years after former president Carles Puigdemont‘s unsuccessful declaration of independence – against ‘violence and the independence movement’.

SCC president Fernando Sánchez Costa called the clashes a ‘tsunami of confrontations’, and requested that ‘Catalans and our friends from the rest of Spain’ counter them with a ‘calm wave’ in the form of the march his group has called for.