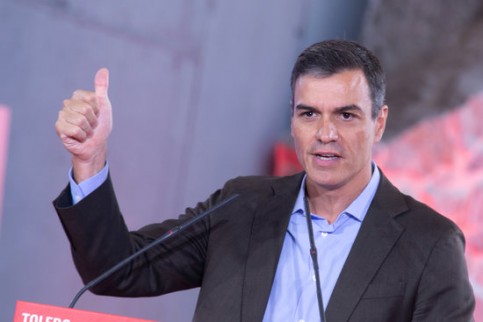 Spain’s acting prime minister Pedro Sánchez has said he could suspend Catalonia’s political autonomy and impose direct rule from Madrid ‘without a problem’ – despite having an acting government in place that is facing a general election on 10 November, the fourth in four years.

‘Article 155 can be applied with an acting government – that is not a problem,’ said Sánchez in an interview with the Cadena SER radio station. ‘There is no doubt there, the Spanish government has studied the possibility.’

A constitutional device long deemed a ‘nuclear button’, Article 155 was only used once in Spain’s recent history – to sack the Catalan government following a declaration of independence on 27 October 2017.

As the verdict for the officials who organised the vote is due in the coming days, the independence movement has promised to respond accordingly.

Sánchez believes that his interim powers will not prevent him from sacking the Catalan government again, if needed.

Former Catalan president Carles Puigdemont, who was removed from office in 2017 and is now exiled in Belgium, has accused Sánchez of using the suspension of Catalonia’s self-rule to gain votes in the rest of Spain.

‘He is entering an election campaign and knows that undermining Catalonia’s [independence] aspirations gets votes,’ said Puigdemont.

The exiled leader also connected Sánchez’s invocation of Article 155 with the recent arrest of pro-independence activists on suspicion of plotting violent acts: ‘They want to use Article 155 after there were hints of violence, but in the Basque Country there were nearly a thousand deaths and they never used it.’

On the other side of the political spectrum, Pablo Casado, leader of the right-wing People’s Party (PP), called on Sánchez to apply Article 155 ‘without delay’, and said he will not have any ‘credibility’ until he ‘moves from words to action’.

‘For the first time, a regional government and parliament [in Spain] are justifying, encouraging, and defending groups that were plotting terrorist attacks,’ said Casado.