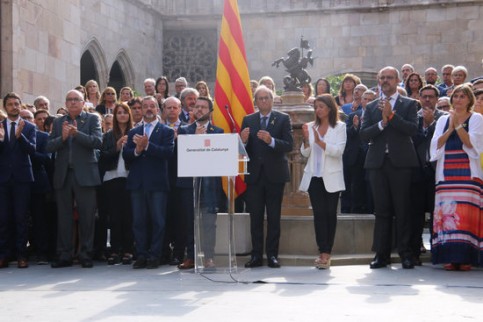 The Catalan Government has reiterated that its commitment to work towards achieving independence.

At an event held on Tuesday, the day marking the second anniversary of the 1 October 2017 referendum, cabinet members pledged to peacefully ‘move forward, without excuses, towards a Catalan republic’.

Their promise came ‘with an undeniable and unquestionable commitment to peace, dialogue, people’s will, voting and democracy.’

The president also remembered the referendum two years ago as ‘the founding day of today’s republicanism in Catalonia.’

‘That day, Catalonia’s society was empowered and faced brutality.’

On Tuesday morning, Barcelona mayor Ada Colau also referred to the incidents of two years ago. ‘We all have the October 1 [vote] fixed in our memories,’ she tweeted. ‘The city council supports the citizens that were attacked by an unjustifiable two-day police operation.’

Colau referred to the fact that the institution she leads is acting as private prosecutor against police officers and the heads of that operation. Indeed, on Tuesday Barcelona’s City Council asked for an inquiry to be opened into 28 law enforcement officials that were at work in the Catalan capital on that day.

Eight officers in charge of the operation in Barcelona are already being investigated for their role in the crackdown.

ALSO READ: The man who lost an eye from a rubber bullet during the Catalan referendum

After a small early morning protest in Girona, several events commemorating the vote were held throughout the morning, including a symbolic vote in Sant Julià de Ramis on whether 1 October should become a local bank holiday.

Sant Julià de Ramis is home to the polling station where then president Carles Puigdemont was supposed to vote. Yet, due to police crackdown, his ballot was cast elsewhere.

Political and civic leaders in favour of Catalan independence also held an event in the centre of Barcelona to mark the day. On everyone’s mind was the impending referendum trial verdict, with speakers confident the decision will be unfavorable for the jailed leaders, and as such dubbed the potential guilty sentence as ‘intolerable injustice’.

During the event, journalist Martí Anglada mentioned the ‘violation’ of rights such as that to protest and to political participation. Former CUP MP David Fernàndez encouraged the Catalan people to participate in a ‘massive’ and ‘diverse’ response to a potential guilty verdict.

President of the Catalan National Assembly (ANC), Elisenda Paluzie, also drove these sentiments home, calling for society to ‘stand firmly under the principles of non-violence’ whilst also condemning Spain’s ‘repression’, and mentioning the recent imprisonments of seven Catalan pro-independence activists.

Other places that were home to Spanish police violence on that day, like the southern town of Sant Carles de la Ràpita, commemorated 2017’s events.

1 October 2017 was also remembered by some of the ministers and president at the time in Brussels.

Carles Puigdemont, along with four of his former ministers, attended a protest outside the European Parliament and pledged to ‘not give up fighting’.

The protest was attended by some 30 people, some of which are MEPs.

Later on the day, Puigdemont spoke at an event by the Council of the Republic, a pro-independence platform he leads from Brussels. He invited all pro-independence parties to attend an upcoming assembly to decide how to respond to the verdict of the independence trial.