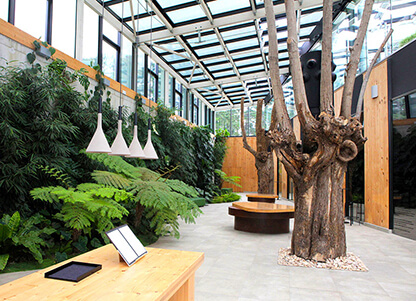 Following on from our first article about The World’s 50 Best, an organisation that ranks restaurants around the world, we now focus on Azurmendi in the Basque Country.

Why visit: Azurmendi is more than one of the most beautiful restaurants in Spain. It is more than a business committed to sustainability, more than just striking architecture in the building designed by Naia Eguino, and even more than the way it relates to food. Azurmendi is, above all, the home of Eneko Atxa – a chef who seeks gastronomic excellence through hospitality.

What’s the concept: To visit Azurmendi in the Basque Country is to feel that you are entering Eneko Atxa’s home. The Spanish chef and his team take you by the hand to discover each corner of the marvellous space. At the same time, you enjoy a gastronomic experience in which the flavour and the beauty of each preparation are always linked to the landscape and the culture that shaped it.

A few words on the chef: Eneko Atxa is one of the most beloved figures in Spanish gastronomy and a chef charged with sensitivity and commitment to his environment, his team, the small producers he works with and to the landscape he loves, respects and wants to honour through his cuisine.

A quote by Atxa: ‘Touch the roots to dream, travel, discover, feel the territory and fly to reach the same starting point.’ This is how the chef himself describes the objective of welcoming the diner with open arms.