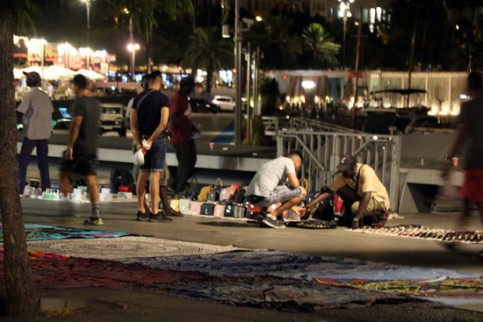 Barcelona’s ‘top manta’ street sellers feel ‘betrayed’ by the city council, says one of their representatives, after the local authority launched special police patrols in key areas of the city to discourage the vendors from illegally selling their wares.

Aziz Fayé, the spokesman for the Union of Street Sellers, said that before the May local election the candidates for council positions promised to do ‘everything possible to resolve the issue positively with social projects.’

Since Monday, a hundred officers from three different police forces have patrolled areas of Barcelona where the ‘top manta’ sellers normally congregate as part of a ‘permanent’ operation to ‘eradicate’ the illegal practice.

Yet the sellers remain defiant.

The term ‘top manta’ borrows its name from how the unlicensed street sellers use blankets (mantes in Catalan) to carry their products from place to place, and put them on display in some of the most prominent tourist areas of Barcelona and in many other Catalan towns and cites. The blankets also mean that their wares can be quickly collected when the police appear.

Arguing that selling illegally on the streets is ‘the only option’ they have ‘to survive’, Fayé says: “We will continue selling on the streets whatever happens, if they want to kill us then they will kill us, but this is our life, our dignity, no one will remove us.’

In fact, on the first two days of the new police patrols, which last from 9.30am to 10pm, some of the city’s ‘top manta’ sellers set up shop in places near Barcelona’s seafront after the officers had retired for the day.

Insisting that the sellers – generally immigrants with few resources – have little alternative for making a living, Fayé asked: ‘Do they want us to steal from supermarkets, beg for money, resort to crime? We don’t want that, we want to work with dignity.’

Criticizing Ada Colau’s ‘change of attitude’, the spokesman for the street sellers called on  Barcelona’s left-wing mayor ‘to remember her promises and to stop acting as if she belonged to the far right.’

Referencing plans discussed to create work opportunities and a cooperative for the sellers, Fayé insists that this type of approach is ‘the only way to resolve this situation, not sending in police or trying to generate fear so that people stay at home.’