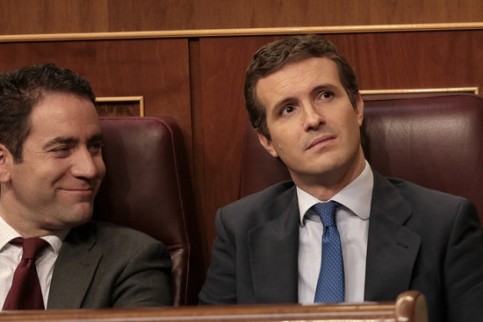 Pablo Casado, the leader of Spain’s right-wing People’s Party (PP), criticised acting prime minister Pedro Sánchez on Monday for saying ‘nothing’ about the situation in Catalonia during his speech in the Spanish Congress, before the vote on his bid to remain as prime minister.

After Sánchez’s two-hour speech, Casado said: ‘You said nothing about Catalonia,’ and he accused Sánchez of making ‘alliances against the state’ and of ‘hiding the serious situation of the pro-independence issue in Catalonia’.

In his response, the acting prime minister insisted: ‘I have spoken about Catalonia as well as Andalusia and the rest of the autonomous communities,’ arguing that what applies to one region applies to all, with Sánchez calling on Casado to abstain in the upcoming vote.

Yet, the PP leader continued to reproach Sánchez, telling him, ‘you are president thanks to the pro-independence vote,’ and arguing that the Socialist leader is not to be trusted, and Casado accused Sánchez of preferring ‘those who want to break Spain’.

‘You are the first president of Spain to recognize that there is a political conflict in Catalonia. How am I supposed to abstain?’ Casado went on to ask, adding: ‘We cannot support your candidacy because it would be harmful to Spain.’

Casado also opposed Sánchez’s diagnosis of the Catalan independence issue as a political one stemming from the 2010 Constitutional Court ruling striking down the referendum-approved Catalan Statute of Autonomy and not a legal one.

In a similar vein, Albert Rivera, the leader of Ciudadanos (Cs) also criticized Sánchez for how he has dealt with Catalonia: ‘You didn’t say anything, but in saying nothing you said it all.’

Rivera has also called Sánchez out for what he has described as making concessions to Catalan pro-independence parties and for negotiating with Podemos in his supposed ‘Sánchez Plan.’

Trying to discredit the points Sánchez made in his speech this morning, Rivera called it all ‘pure theatrics’.

When it was Pedro Sánchez’s turn to respond again, he told him that making deals with the far-right was real theatre, and highlighted the fact that many top party members had left Ciudadanos precisely for that reason.