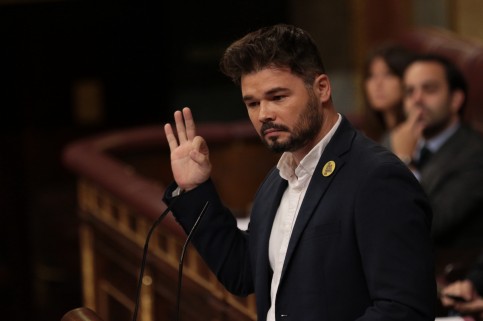 The main pro-independence party in the Spanish Congress, the Esquerra Republicana (ERC) party, extended its hand to Pedro Sánchez during the parliamentary debate to name him as prime minister.

However, senior ERC MP Gabriel Rufián did not unveil his group’s position on the first round of vote later on Tuesday.

Rufián also called on the Socialist (PSOE) candidate – as well as the right-wing opposition groups – to sit down at a negotiating table over the Catalan independence issue.

Some of the demands Rufián brought up in his statement included a self-determination referendum in Catalonia, an inquiry into the alleged links between Spain’s intelligence and the mastermind behind the 2017 Barcelona attacks, and support to migrant sea rescue NGOs such as Open Arms.

The Esquerra MP started his speech calling out a ‘terrible anomaly’.

‘It shouldn’t be me here, but you, Oriol [Junqueras],’ he said referring to the suspended MP in precautionary detention.

With these words, Rufián rejected the imprisonment of Catalan pro-independence leaders, who have been behind bars for 21 months whilst on trial – and now whilst waiting for the verdict.

‘Those people over there [referring to far-right Vox party members acting as the ‘popular prosectution’ in the Catalan trial] ask that our colleagues receive a 500-year sentence for voting,’ he said.

On Monday afternoon during the investiture debate, the left-wing En Comú Podem, the Catalan ally of the Podemos party, called the acting prime minister Pedro Sánchez to listen to Catalonia.

‘In dialogue, it’s very important to ask questions and then listen. Catalonia deserves a Spanish government that will ask it questions and listen, it does not deserve a wall,’ Jaume Asens said, an MP who usually sides with the Catalan independence movement.

Podemos remain in eleventh-hour coalition talks with the Socialists and, if the negotiations are successful, they will form the first joint government in Spanish history since 1936.

Yet in his statement during the congress debate, Podemos’ head, Pablo Iglesias, also made clear they want to play a relevant role in the potential cabinet.

‘Respect our 3.7 million voters, because we won’t accept being a mere backdrop,’ he said.

In his response, Sánchez denied an intention to minimise Podemos’ impact in the executive, but also asked for their support even if in the end there is no coalition government deal.

The Socialist candidate also emphasised the ‘differences’ between his group and Podemos in the independence issue. Sánchez has rejected the Catalan jailed leaders being called ‘political prisoners,’ as Podemos refers to them.

Meanwhile, the pro-independence group Junts per Catalunya (JxCat) have said they will vote No to Pedro Sánchez in his bid to renew his role as prime minister.

On Monday at around 9pm, after the first full day of the debate to name a Spanish leader, JxCat MPs announced on Twitter they would reject the Socialist, including those suspended representatives in precautionary prison.

‘Many have talked about out but without talking to us. Now we speak: after having listened to the debate and with the precedents of the candidate, we say No to supporting Pedro Sánchez’s bid,’ tweeted all three jailed MPs at the same time.

On Tuesday morning, when it was her turn to opine on Pedro Sánchez’s potential future presidency, JxCat MP Laura Borràs said that he lacked credibility when he spoke of dialogue as, according to her, he has not been listening to pro-independence Catalans’ grievances.

She also described his decision to not tackle the independence issue head on as constituting a ‘worryingly complicit silence’ and accused him of ignoring human rights violations.

Borràs finished off her speech by asking Sánchez to speak directly to her jailed colleagues and recited a poem about the importance of listening to others.

Without JxCat’s votes, Sánchez’s bid gets more complicated – in case his coalition talks with Podemos are successful, he will not only need the anti-austerity party, plus other forces that are expected to support him. The Socialists are very likely to need at least the abstention of the left-wing Basque and Catalan pro-independence parties Bildu and ERC.

Sánchez accused by right-wing of alliances ‘against the state’

Boris Johnson promises to deliver Brexit, Trump tweets: ‘He will be great!’