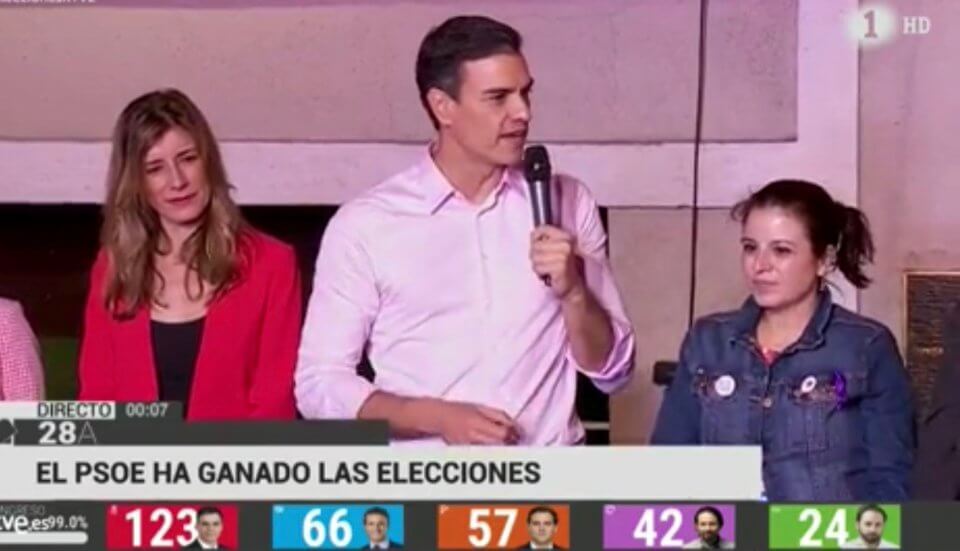 The Socialist (PSOE) party of Pedro Sánchez has won the Spanish General Election (with 123 seats), but it will need to form an alliance in order for Sánchez to continue as prime minister.

The general election has also seen the far-right Vox party enter the Spanish national parliament (with 24 seats), after decades on the margins of politics.

Pedro Sánchez has won but without the parliamentary majority required to govern alone.

This means he will have to seek alliances with rivals in a hostile political environment that has fragmented further since Catalonia’s failed independence bid.

The right wing People’s Party (PP) has achieved one of its worst results in history, with just 66 seats, as the Ciudadanos (Cs) party (57 seats) and Vox have both eaten away at its right-wing voter base.

Sánchez and his PSOE party will have to forge alliances with left wing Podemos (42 seats) and possibly smaller groupings like the Catalan pro-independence parties, Esquerra Republicana (with 15 seats) and Junts per Catalunya (7 seats), as he has done over the past 10 months.

Turnout was high – about 60.75% with still two hours of voting left – up from 51.21% at the same time in 2016, election authorities said. Final figures are expected to be higher.

Turnout was also notably higher in Catalonia than two years ago, rising nearly 18% to over 64%.

Sánchez was forced to call early elections after Catalan pro-independence parties refused to give him the support he needed for his 2019 budget.

It seems Sánchez would prefer not have to rely once again on Catalan pro-independence MPs in the national parliament, given right-wing parties’ accusations that he cosied up with the ‘enemies of Spain’ during his time in government. However, he may have no choice.

A possible alliance with Ciudadanos (Cs) has not been ruled out, even if the party’s leader Albert Rivera has made ‘chasing’ the socialists from power a ‘national urgency’.

In Catalonia, it was a historic election for the pro-independence Esquerra Republicana (ERC) party, which increased its number of seats to a record 15 in the Spanish parliament.

Winning six more seats than in it did in the last general election in June 2016, it is the first time since the 1930s that ERC has come first among the Catalan parties.

With the Junts per Catalunya party (JxCat) coming in with 7 seats (one less than the last election), it means the pro-independence bloc in the Congress has an unprecedented 22 seats.

Next among the parties in Catalonia came the Catalan Socialists (PSC), who went up 5 seats to 12, although the leftwing En Comú Podem party (ECP) was unable to maintain its good showing from three years ago, dropping from 12 seats to 7.