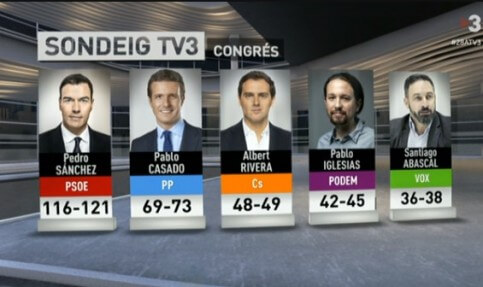 The Socialist (PSOE) party has won the Spanish general election, according to an exit poll released at 8pm, as polling stations closed.

The far-right Vox party will make its debut in Spain’s Congress with 36-38 seats, says the survey.

In Catalonia, Esquerra Republicana (ERC) has come first with 13-14 seats, winning the election for the first time since the 1930s. It is neck and neck with the Catalan Socialists (PSC) with 12-13.

Vox also makes a breakthrough in Catalonia with one seat, along with the far-left pro-independence Front Republicà party, which also has one seat.