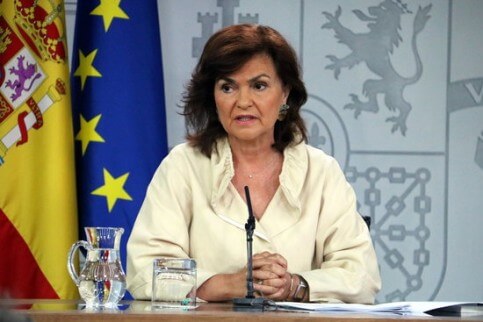 Spain’s acting deputy prime minister Carmen Calvo has said that the Socialists (PSOE) intend to remain a minority government despite needing support from other parties to secure parliamentary approval.

The PSOE comfortably won Sunday’s general election with 28.7% of the vote and 123 seats in Spain’s congress, but was left 53 short of an overall majority.

The fragmented result, with five parties each winning more than 10% of the vote, has raised the prospect of PSOE agreeing a coalition with left-wing Podemos, which would require support from smaller parties, perhaps including pro-Catalan independence Esquerra Republicana (ERC).

Alternatively, PSOE could form a majority by reaching across to the centre-right Ciudadanos (Cs), though that is complex politically as both sides would have to break pledges not to work together.

However, Calvo believes the result is sufficient for the Socialists to ‘stick with the same formula’ that they adopted in the 10 months since coming to power by winning a confidence vote.

‘The PSOE’s victory is more than big enough to make us the rudder of the ship, with the rest of the ship following the course that we said,’ she told commercial radio on Monday morning.

Regarding Catalonia, where pro-dialogue PSOE came second to Esquerra by around 50,000 votes and three seats, ERC’s senior representative in Madrid, Gabriel Rufián, has urged the Socialists not to ‘betray’ their own voters by working with fierce unionists Cs.

Asked if ERC would give Pedro Sánchez the parliamentary backing he needs to continue as prime minister, Rufián replied that the ‘crucial question’ is not what ERC decides, but whether PSOE will agree to its calls for self-determination and pardons for imprisoned Catalan leaders.

Meanwhile, José Manuel Villegas, the general secretary of Cs, which maintained third-party status in Spain with 15.86% of the vote, while moving up to sixth in Catalonia with 11.55%, said that the decision of being an opposition party ‘is already taken’.