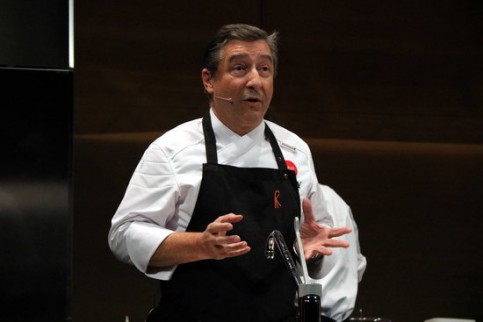 After Girona-based chef Joan Roca brought home the top prize from the first two editions of the worldwide culinary awards, this autumn the competition itself is coming to Catalonia.

On the menu for the two-day cooking convention are a conference on ‘Food Meets Science’ and a gala-style ceremony, where winning restauranteurs in a range of categories will be revealed, the main course comprising the pronouncement of the top chef in the world this year.

The awards process has been streamlined to comprise a ‘Power 100’ global ranking of chefs – chosen by industry professionals including chefs, sommeliers and food critics and photographers – which will form the long list from which the leading chef accolade will be selected.

At the 2018 awards in Milan, Roca – whose three-Michelin star restaurant ‘El Celler de Can Roca‘ in Girona has twice been named the best in the world – retained the title he won at the inaugural event in Warsaw the previous year, while Spaniard David Muñoz kept third place.

Roca will once again be one of the favorites to be named ‘Best Chef’, since he is recognised for his seemingly limitless innovation, serving up an ever-changing avant-garde take on traditional Catalan cuisine in surprise menus costing between €155 and €190 per customer.

Specialist prizes will be also served up, most notably for the best pastry chef, best food artist, best chef from the host city, and for the first time, debutants and legends awards.

Meanwhile, the food conference will bring together experts from the worlds of neurology and gastronomy to explain what happens in the brain while people are eating, how the brain influences individual food choice, and other interdisciplinary cooking questions.

Further details will follow later in the year, with the event taking place in September.