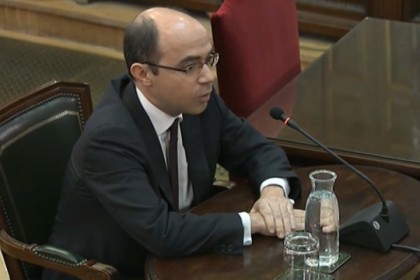 Week 6 and the 18th day of the Catalan trial started on Tuesday morning with the testimony of Felipe Martínez, the deputy secretary of the Spanish finance ministry during the 2017 crisis.

He was one of the highest-ranking officials in the department that took control of Catalonia’s finances during that period, under then finance minister Cristóbal Montoro, who already testified on the 8th day of the trial.

He was summoned to appear in court as witness last Thursday, but due to the length of the testimony of Josep Lluís Trapero, the former Catalan police chief, Martínez’s hearing was postponed.

Although Spain’s finance ministry ‘put all the elements in place’ to ensure public money was not used for the 2017 referendum, Felipe Martínez told the Supreme Court that he could not confirm ‘what actually happened’.

After the finance ministry took control of Catalonia’s finances in the run-up to the referendum, ‘all aspects of public funding of the Catalan government were sent to the Spanish executive,’ Martínez confirmed.

Martínez said the Spanish government followed court orders and requested information from the Catalan authorities about possible ‘expenses related to the referendum’ and international observers.

However, the former finance official also told the court that there were ‘delays’ in sending some of the information related to Catalonia’s finances, and that it was sometimes ‘incomplete or inexact’. In these cases, he added, the prosecutor was informed.

After the testimony by Felipe Martínez, the first of dozens of Spanish Guardia Civil police officers took the stand in the trial to give testimony on their role in raids of public buildings, homes and offices in Barcelona on 20 September 2017, in the run-up to the referendum.

All of the officers are witnesses requested by either the public prosecutor or Spain’s solicitor general.

The first officer told the court that in the home and office of former Catalan finance secretary, Lluís Salvadó, they found ‘documents related to the ‘disconnection’ of Catalonia,’  and others that detailed ‘possible scenarios after the referendum’.

According to the officer, the police also came across a document that referred to ‘a war scenario’ and ‘a guerilla scenario’ regarding ‘Spain’s possible legal and financial responses’ to the independence bid, along with ‘the ways to survive them’.

‘Mr Salvadó was arrested because he was believed to be developing state structures related to setting up a Catalan tax office,’ said the officer, who added he heard Salvadó instructing his secretary by phone to ‘throw documents from the meeting room into a backyard’.

The police officer also told the court that the Catalan bar association was informed of the former finance secretary’s arrest, a statement that drew a gesture of surprise in court from defence lawyer, Andreu Van den Eynde.

Referring to the raids carried out by the Guardia Civil on the Catalan government buildings, the officer told the court that he ‘would not say’ that the 20 September rallies against the raids were ‘festive’.

In fact, the officer described the protests as ‘a siege of the economy and foreign affairs ministries’, and added that when leaving the Catalan finance ministry, the police were verbally insulted by people outside, although they had no problems leaving the site.

A second Guardia Civil police officer testifying in court on Tuesday said that on 20 September 2017, the former Catalan National Assembly (ANC) head, Jordi Sànchez, who is one of the independence leaders on trial, told a colleague he ‘wouldn’t allow’ police vehicles to reach the economy ministry, which was one of the public buildings raided by police.

The officer said he was part of the raid on the home of former Catalan treasury minister, Josep Maria Jové, where the police found various documents with ‘references to the referendum’.

After the raid of Jové’s home, the officer said the intention was to take the former official to his office in the economy ministry, where another raid was taking place. Yet, an officer there told him it was ‘impossible’ to get to the building due to the large number of protestors outside and that was when he reported what Sànchez had said.

The officer also said that he took part in a number of raids related to the preparations for the referendum and identified former communications secretary, Antonio Molons, as the person charged with hiring firms to produce publicity material for the vote. Previous witnesses have spoken about being contacted by ‘a Toni’.

According to the officer, he had taken a statement by graphic designer, Enric Vidal, who testified last week, and who told him he had met with ‘Toni’, who gave him a SIM card so as to contact him. The officer said that the empty card that had contained the SIM card was found during a raid of Molons’ house.

The officer’s testimony also contradicted that given by the former head of the Public Diplomacy Council of Catalonia (Diplocat), Albert Royo, who last week denied in court that international experts who visited Catalonia during the independence crisis were hired to act as observers on the day of the referendum.

Contradicting Royo’s version, the officer said he took part in the raids of the Diplocat HQ, where police found documents that prove that experts were not ‘visitors’, as Royo maintained, but were ‘unequivocally’ asked to come to Catalonia to carry out ‘international observation’ tasks.

The third Guardia Civil officer to testify on Tuesday stated that the protests against police raids of the foreign affairs department on 20 September 2017, turned ‘violent’ and ‘aggressive’ over time.

The protests against the raids started 30 minutes after the operation aimed at halting the independence referendum began, according to the officer, who added: ‘We decided to evacuate the judicial secretary. If that tumult broke into the department, the consequences could have been catastrophic.’

‘We received insults, death threats … protestors were no longer chanting that they wanted to vote,’ the officer told the court, who also said that he was ‘shocked’ by the faces of protestors ‘hitting’ the car windows: ‘They reflected violence. These were not normal faces, they were angry faces.’

‘I’ve never seen civilians show such a lack of respect for police that they should even try to take a detainee from them,’ said the officer, who led the arrest of Foreign Affairs official Xavier Puig Farré, adding that the Catalan police officers present ‘just looked at what was happening’ while protestors ‘turned aggressive’.

The defence teams accused him of giving false testimony, and showed faces of disbelief when he described the events, especially when he tried to describe ‘flags of Òmnium [pro-independence group]’ which he allegedly saw in the protests.

The judges rejected the defence complaints that also claimed the officers testifying on Tuesday were responding to questions that should not be allowed.

A fourth officer testified that on referendum day (1 October 2017), the Catalan police (the Mossos d’Esquadra) were passive and that some voters became aggressive and even tried to run over Spanish police officers.