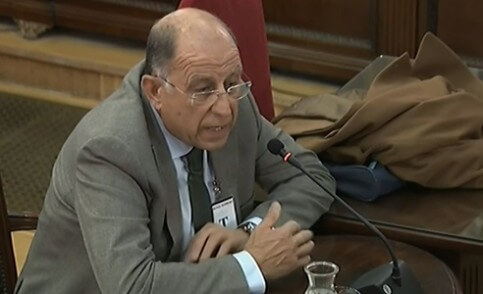 After Guardia Civil colonel Diego Pérez de los Cobos completed his testimony (which began yesterday afternoon), Montserrat del Toro testified on the 12th day of the Catalan trial. Her image was not televised.

Montserrat del Toro is a key witness from the 20 September Spanish police raids and subsequent pro-independence protests in Barcelona ahead of the independence referendum.

She was a legal secretary who took part in the raids and told the court that, while inside the economy ministry building, outside which the demonstrations were taking place, she was ‘afraid’ to leave the building, as she saw ‘a sea of people waiting for us in case we left the building using the front door’.

She also explained in her testimony how she was again scared to leave the building in the evening. She explained that later in the day of the raids, still inside the department of economy, ‘I heard a loud noise, and then I saw several people pressed against the glass door. I was afraid.’

She also told the court that Jordi Sánchez, one of the leaders of the rally, told her that ‘he couldn’t do anything’ to move people away from the entrance of the building.

ALSO READ: The ‘Jordis’ can now appeal to the EU Court of Human Rights

Del Toro also testified that she heard people chanting slogans outside such as: ‘We will vote’, ‘They won’t leave [the building]’, and ‘They shall not pass.’

The occurrences of this day have become a contentious point and a focus of the trial, as much of the prosecution’s case for violence, and consequently rebellion, depends on it.

‘I didn’t put my head out the window at any moment, as police officers recommended me not to do it,’ Montserrat del Toro explained.

Activists Jordi Sànchez and Jordi Cuixart, who are charged with rebellion for having called those rallies, are facing 17-year prison sentences. Del Toro said in her testimony that she saw both Sánchez and Cuixart inside the building on 20 September.

The legal secretary described her exit from the economy ministry building, accompanied by a Catalan policeman to the court. According to del Toro, in order to leave the building safely, she had to be escorted through a theatre adjacent to the building they were in, while having to wait ‘around 30 minutes’ in the dressing rooms with police officers and actors from the theatre.

‘We started running, because there were protestors just 2 metres away. We got into an unmarked police car. It was past midnight,’ del Toro said.

Montserrat del Toro also told the court that she requested a helicopter to leave the department of economy building, as she felt the only safe way to leave was by air, however her request was ‘laughed at’ by police officers.

During the cross-examination by the defence lawyers, Andreu Van den Eynde asked del Toro if it’s true that she follows unionist and anti-independence Facebook groups, but the courtroom president Manuel Marchena rejected the question.

The Supreme Court decided not to show the face of Montserrat del Toro in its live streaming, as she requested, in order to protect her identity.

Two owners of Catalan hotels which hosted Spanish police officers ahead of the 1 October 2017 referendum testified on the 12th day of the Catalan trial.

One of them, Alberto Fraile,  who runs Hotel Gaudí in Reus, said that there were ‘some demonstrations’ outside his business during that period, in which people insulted Spanish police officers staying there.

Yet the director of the hotel denied being pressured to refuse rooms for Spanish police officers there.

He said he witnessed two demonstrations against the police officers, ‘peaceful ones’, and testified that his business received several phone calls urging him to reject Spanish police officers staying in the hotel.

‘Insults, threats, and they warned us of boycotts if they didn’t leave,’ he said.

ALSO READ: Catalan trial focus: ‘In the end, they are judging all of us’

After the two hotel owners, Pedro Buil, an official in the port of Palamós, also testified.

Rull is facing rebellion charges and a 16-year prison sentence in the independence trial.

IT, communications and advertising

Digital entrepreneurs and IT workers also testified in the Supreme Court on Wednesday afternoon, giving evidence on the digital tools used to enable the independence referendum on 1 October 2017.

Businessman and IT expert, Vicente Nos Ripollés, was the first to take the stand, saying he met the Catalan president and vice president in the summer of 2017, to discuss a blockchain voting system.

According to Nos, the electoral system they discussed would allow voting from abroad, at a cost of ‘some 400,000 to 500,000 euros.’ However, Nos did not accept the project, as ‘I didn’t know who I had to bill for the work.’

The next witness, Quim Franquesa, said he was contacted by Catalan official Xavier Vendrell, who asked him if he could ‘develop an electronic voting system,’ and was told the referendum ‘would be legal through a law to be voted on in parliament.’

Franquesa also talked about payment. After presenting a project to top government officials, it was made clear to him that ‘the Catalan government would pay nothing, I think because their finances were blocked. They told us a third party would pay for it.’

‘We met with technicians from the Catalan government’s IT centre,’ Franquesa went on, adding that ‘the technical part was not clear, he didn’t know who had to pay for it … So we decided to turn the project down.’

Franquesa was followed on the stand by Teresa Guix, who designed a website promoting a pact for a referendum in Catalonia that she said aimed to ‘give information on the associations that would be in favour of an agreed referendum with Spain.’

Yet, she said ‘the final outcome of the referendum website was nothing like the one I designed. The final design included a register for volunteers.’ She also said she refused payment after being summoned by a local court: ‘for 2,700 euros it was not worth having problems,’ she said.

The heads of two communications agencies took the stand next, Olga Solanas and then Ferran Burriel.

Solanas was asked about an advertisement for the referendum published months before October 2017 but she denied seeing it. ‘I was only in charge of buying ad spaces in the press,’ she said.

As for Burriel’s business, it took part in the ad campaign to promote a registry of Catalans abroad. Burriel said he ‘did not know that the Catalan government had had warnings to stop the referendum’ when his company became involved in the ad campaign in March 2017.

The interim head of a public media corporation, Núria Llorach, did not testify, as she is under investigation by another court.

The last witness of the day was the editor of the El Punt Avui Catalan newspaper, Xevi Xirgo. He said his newspaper published an advertisement for the referendum in September 2017, but did not publish any others after getting a court warning.

Xirgo said the newspaper took the decision to publish the ad, which was taken from ‘social media’, on its own initiative and received no payment in return.