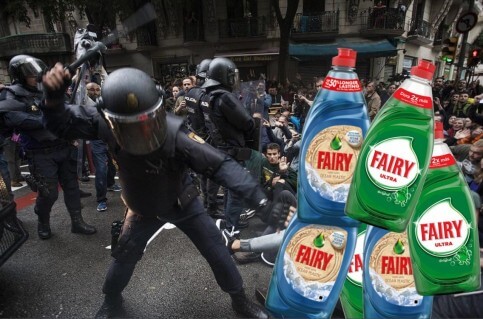 It’s not often that a witness statement in the Supreme Court goes viral on the internet, but the declaration on Tuesday by the former Spanish government delegate to Catalonia handed meme-makers a gift thanks to his reference to the so-called ‘Fairy trap’.

In testifying in the trial of Catalan independence leaders, Enric Millo listed some of the alleged tactics used by people during the 2017 independence referendum to prevent Spanish police officers from closing down polling stations, including the ‘Fairy trap’.

‘An officer told me he had fallen for the Fairy trap. I asked him what that was. It consisted of spilling detergent at the entrances of some schools so when the police entered, they would slip, fall to the floor, and were then kicked in the head.’

Rather than causing outrage, Millo’s reference to the tactic named after the famous brand of washing-up liquid led to an avalanche of memes and jokes on social media, with the ‘Fairy trap’ quickly becoming a trending topic on Twitter.

Doctored photos of protesters clutching Fairy bottles while being removed by officers, fake images of seized material that includes a bottle of Fairy, false ad campaigns that joke about Fairy’s effectiveness against police … there seemed no end to the memes.

Even the Committees in Defence of the Republic (CDRs) pro-independence protest groups saw the lighter side, with a tweet that said ‘you can’t help but laugh’ alongside an image poking fun at the detergent’s ability to prevent riot officers from confiscating ballot boxes.

Here are some other examples: