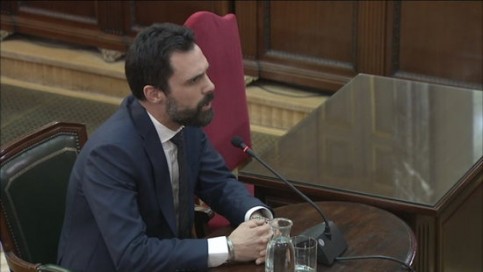 ‘The force used was the minimum required,’ Spain’s former secretary of state for security said about the Spanish police operation to stop the 1 October 2017 independence referendum, in his testimony in the Supreme Court this morning – on the 10th day of the Catalan independence trial

José Antonio Nieto was the first to testify, arguing that the situation on 1 October was the ‘worst case scenario’, as the ‘Catalan police [the Mossos d’Esquadra] did not intervene, and the level of resistance was higher than expected.’

‘There were assaults against Spanish police and Guardia Civil officers,’ said Nieto, who also described the Catalan police intervention during the independence referendum as ‘insufficient, ineffective, and guided by objectives other than impeding the vote.’

In fact, the former secretary of state was generally critical of the Mossos d’Esquadra, saying, ‘we were told that the Catalan police were enough to guarantee public order. I didn’t agree after watching images from September 20.’

Nieto told the court that the protests on 20 September against a Spanish police operation to stop the referendum ‘concerned’ the Spanish government of the time. ‘We were concerned about the consequences of the disturbances,’ he added.

Soon after, the Spanish authorities deployed 6,000 police officers from all over Spain in Catalonia, with the goal of preventing the vote: ‘Court orders made it clear that the referendum must be stopped,’ said Nieto.

Spain’s former security head also told the court that the Catalan police did not seize any referendum material nor close any polling station ahead of the vote, and he accused former Catalan police chief, Josep Lluís Trapero, of being ‘totally aligned’ with the government.

Referring to the the security coordination meeting between the Catalan and Spanish governments ahead of the independence vote, Nieto said: ‘It was surreal sitting at the same table with those who called the referendum.’

‘There was not even the smallest gesture towards engaging in real dialogue,’ said the former secretary of state for security about the attitude of Catalan officials during the independence crisis. ‘They came with an idea, and left with the same idea,’ he said.

The Catalan parliament speaker, Roger Torrent, said he would have done ‘exactly the same’ as his predecessor, Carme Forcadell, who is facing rebellion charges for having allowed debates and votes on independence in 2017 – and who testified herself at the Supreme Court on 26 February.

Testifying today as witness during the trial against Forcadell and other officials, Torrent said she ‘could not have done anything else’ other than accept the debates.

‘The parliament bureau can’t act as a censor body,’ he said.

Torrent also said that laws such as the one providing a legal framework for the transition towards an independent Catalonia ‘never came into effect’.

He also referred to the 1 October 2017 referendum.

‘If demonstrating or calling a referendum is on trial, there should be thousands of people sitting in the dock, starting with me,’ he said, expressing a similar point as Barcelona’s mayor Ada Colau, who testified as a witness on 28 February.

‘The conflict between Catalonia and Spain will only be solved by calling a referendum,’ added Torrent, who vowed: ‘We will vote again, I will vote again.’

Before he began to give his testimony, Torrent said that the fact that some MPs are accused in the proceedings ‘distorts the normal functioning of the chamber.’

He also expressed his ‘concern’ about the fact that the far-right Vox party is serving as a private prosecutor while Catalan MPs are in the dock.

After Torrent, it was the turn of two unionist members of the Catalan parliament bureau in 2017: José María Espejo-Saavedra, of the Ciutadans (Cs) party in Catalonia, and David Pérez, of the Catalan Socialists (PSC).

Espejo-Saavedra told the court he did not remember how the members of the referendum electoral authority were appointed, but he guessed ‘it was in an irregular way’.

She also said that ‘parliamentary initiatives were admitted that were in direct opposition to what the Constitutional Court had ruled,’ despite the warnings of the chamber’s lawyers.

As for Pérez, he said of the parliament bureau at the time: ‘Our duty is to reject proposals that contravene the constitution.’

He also said that ‘we Socialists agreed to create a committee to study a constituent process, but rejected it when we saw what it was about.’