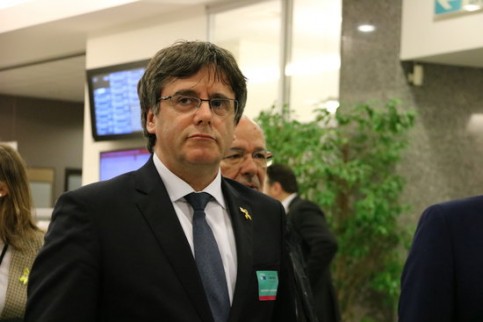 Former Catalan president, Carles Puigdemont, paid a surprise visit to the European Parliament on Monday afternoon, just a couple of weeks after the institution’s president, Antonio Tajani, cited ‘security threats’ to cancel a talk he was to give there.

Puigdemont went to the Brussels chamber to open an exhibition on the Catalan language organized by MEP Ramon Tremosa and the ‘Plataforma per la Llengua‘ NGO, despite his name not appearing on the list of participants.

Among the guests who were announced were Puigdemont’s former ministers, Toni Comín, Lluís Puig, Meritxell Serret and Clara Ponsatí. However, the order blocking the former president’s talk did not explicitly say that he could not enter the building.

Puigdemont’s surprise visit comes as the European Parliament authorised a conference called ‘Catalonia, a Spanish Region’ by the Spanish far-right Vox party about the political situation in Catalonia, which is scheduled to take place on Wednesday.

On announcing the event, Vox accused the Catalan government of attempting a ‘coup’ and called for people to attend the conference to learn ‘the real history of Spain’. Vox politicians Javier Ortega Smith, Jorge Buxadé, and Malena Contestí will be among those speaking.

The exhibit Puigdemont opened, called ‘The Catalan Language: 10 million European Voices,’ was not free of controversy. EU Parliament officials initially withdrew permission for the event due to the proximity of the Spanish general election on 28 April, but later rectified and authorised it to take place.