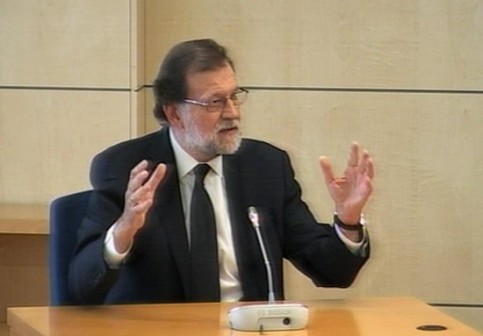 Spain’s former prime minister Mariano Rajoy, who was in power when Catalonia’s executive tried to secede in 2017, will testify in the high-profile trial of independence leaders on 26 February, the Supreme Court has said.

In a statement, the court said other witnesses who will testify next week include Catalonia’s former president Artur Mas and Spain’s former deputy prime minister Soraya Saenz de Santamaria.

Inigo Urkullu, the president of the Basque Country who acted as a mediator during the crisis in October 2017, will also appear in court next week.

Rajoy, who triggered article 155 of the Spanish Constitution to suspend Catalonia’s self-rule following a declaration of independence in 2017, is set to give his testimony at 4pm on 26 February.

The former head of People’s Party (PP), Rajoy was ousted from power last spring when pro-independence parties backed Socialist Pedro Sánchez in a no-confidence vote in the Spanish Congress.

Soraya Sáenz de Santamaría – the former deputy PM and Rajoy’s right-hand woman – is expected to give her testimony on Wednesday morning. She was the Spanish official in charge of coordinating the takeover of Catalan institutions.

The announcement came as the 12 defendants continued to be questioned today at Madrid’s Supreme Court in a trial for rebellion and other offences that takes place under intense domestic and foreign scrutiny.

They are being tried for pushing an independence referendum in October 2017 in defiance of a court ban, and for a subsequent short-lived declaration of independence on 27 October.

As such, the main defendant in the trial is Oriol Junqueras, Puigdemont’s then deputy, as Spain does not judge people in absentia for major offences.

Accused of rebellion and misuse of public funds, Junqueras faces up to 25 years in jail.

Today, the fourth day of the trial, former regional government spokesman Jordi Turull took the stand, defending his acts and that of his colleagues.

‘It’s totally normally to try and do what you promised to citizens of Catalonia in a peaceful and democratic manner,’ he told the seven judges at the Supreme Court.

The independence bid sparked Spain’s deepest political crisis since the transition to democracy in the 1970s after the death of dictator Francisco Franco.

Independence supporters and the defendants’ lawyers maintain they are on trial for their ideas and for political dissidence.

Prosecutors, though, insist the separatist leaders and activists are being tried for their actions and not for what they think.