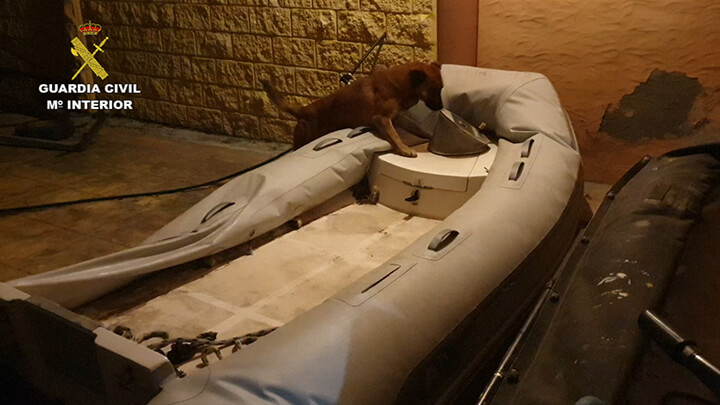 Spain’s Guardia Civil have detained 66 people in a southern drug trafficking hotspot where authorities have launched a crackdown on narcos whose operations have become increasingly brazen.

Police detained the suspects across Andalusia including the province of Cadiz, the entry point for 40% of all drugs smuggled into Spain, according to the interior ministry.

They are the latest to have been apprehended over the past few months in a vast crackdown on drug trafficking in the region after the government sent police backup last year with the then interior minister vowing the area would ‘not be dominated by narcos’.

In its statement, the police said those detained are accused of belonging to a criminal drug trafficking organisation, stealing vehicles and money laundering.

Police also seized hashish and high-speed boats used for trafficking, and dismantled two jetties ‘used by various organisations to launch inflatable speed boats to sea with which they carried out their contraband of hashish.’

Andalusia, a sprawling region in southern Spain with high unemployment and close to Morocco, a key source of hashish, has been the scene of increasingly brazen drug trafficking activity over the years.

Traffickers have landed shipments of drugs on beaches in broad daylight and have even physically attacked police officers.

In February last year, some 20 people stormed a hospital in the town of La Linea de la Concepcion to free a suspected drug trafficker who had been injured in a motorbike crash as he tried to escape arrest.

The AUGC Guardia Civil police union also warned that ‘legions of youth’ in the poor area were flocking to work for narco gangs that were able to pay salaries ‘that not even a multinational could pay its executives.’

Mariano Rajoy to testify on 26 Feb in Catalan trial