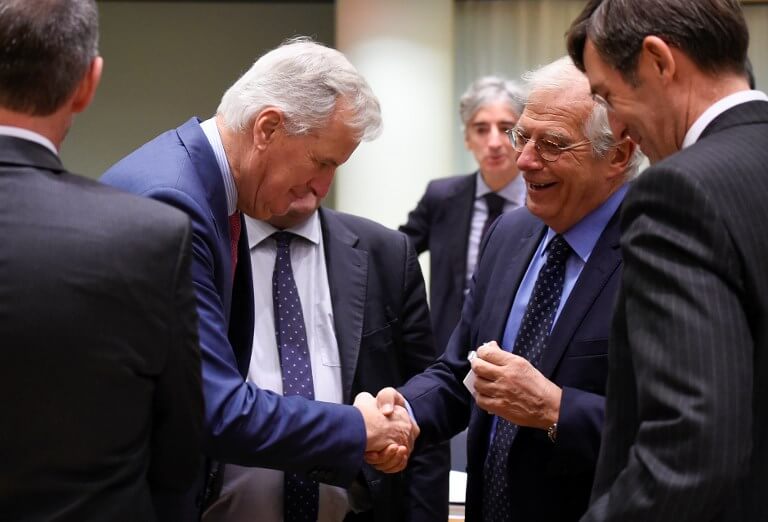 European governments started to thrash out a plan for close ties with post-Brexit Britain on Monday in the last week before they gather to sign their divorce papers.

‘We have the divorce papers on the table. 45 years of difficult marriage are coming to an end.’

The British leader has said she will be in the city herself this week to see the president of the EU commission, Jean-Claude Juncker, for last-ditch talks.

Neither May nor European leaders are keen to reopen the draft Brexit withdrawal agreement that was grudgingly approved by the British cabinet last week.

But both sides are scrambling to finalise a parallel political declaration that will set out a road-map for post-Brexit negotiations on future EU-UK ties.

‘Now that there is a concept withdrawal agreement we think that it is satisfying, it’s workable, and we will invest our energy now in the political agreement,’ Dutch foreign minister Stef Blok said.

London wants to lay out in as much detail as possible a route to a free trade agreement, in part to shore up support in a British parliament that may yet reject the deal.

Brussels, meanwhile, insists Britain cannot have the same privileged access to the single market as it did as a member state after Brexit on 29 March next year.

European negotiators plan to publish their version of the statement on future relations on Tuesday.

On Sunday, according to diplomatic sources, EU ambassadors fleshed out the document from just over six pages to around 20 as more details were agreed.

They also discussed an EU proposal that the draft withdrawal agreement be amended to extend the planned 21-month post-Brexit transition by two years to the end of 2022.

No decision was taken on this, however, and members are wary of re-opening the document and allowing British hardliners to restart a debate on its terms.

Ministers arriving at Monday’s meeting would not be drawn on this. ‘It’s still open,’ Blok said.

Blumel said 29 March is set as Brexit day and the withdrawal will be approved as is on Sunday, while the political declaration would seek ‘as close a relationship as possible’.

In the meantime, EU Council president Donald Tusk is going ahead with plans to bring May and her fellow leaders together on 25 November to sign the deal.

‘We now have an intense week of negotiations ahead of us,’ May will tell British business leaders on Monday, according to Downing Street.

‘During that time I expect us to hammer out the full and final details of the framework that will underpin our future relationship,’ she was to say.

‘And I am confident that we can strike a deal at the council that I can take back to the House of Commons.’

Integrity of the Union

While the EU 27 and their negotiator, Michel Barnier, have remained publicly united through the 17-month negotiation – Britain’s political camps are at war.

Whether or not May wins an improved future partnership offer this week, she still has to get the withdrawal deal itself past parliament.

Conservative hardliners and May’s Northern Irish unionist allies have pledged to vote down the treaty despite the threat of a calamitous no-deal Brexit.

And the opposition Labour Party, scenting a chance to topple May’s government, has also warned that its members will not support her deal.

After making what they see as an offer that respects Britain’s desire to leave but preserves the integrity of the Union, EU officials are surprised by the furious debate.

Publicly, they refuse to intervene in Britain’s affairs, but privately they insist both sides ‘exhausted their margin to manoeuvre’ in the divorce negotiation.

‘Of course both sides have to pass parliament. It goes for the UK but it also goes for the Europeans,’ Blok said.

‘So this political declaration really lays the foundation of our future relationship, it has to be ambitious,’ he added.

Some member states were annoyed that their rights to fish in British waters were not guaranteed in the withdrawal deal and have been left to future talks.

And Spain also has concerns about the future status of Gibraltar, the British territory on its southern coast, a diplomatic source said.

But grumbles remained behind closed doors because, in the words of one European diplomat, the ambassadors agreed not to pour oil into the British fire’.

And of the divorce deal, Belgium’s Foreign Minister Didier Reynders said: ‘Here it will survive. We are waiting for the same situation in London, but here in Brussels it will survive.’