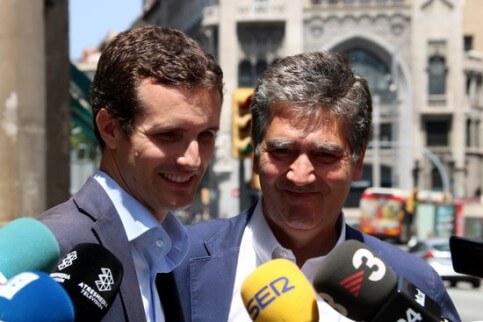 According to leaked chats from Spain’s People’s Party (PP) spokesman in the Spanish Senate, the party could ‘control from the behind the scenes’ the trial prosecuting Catalan leaders for organising a referendum on independence.

In a WhatsApp message made public by ‘El Español’ online newspaper, Ignacio Cosidó told colleagues that the conservative party had secured influence over the Second Chamber of Spain’s Supreme Court following an agreement with their political rivals, the ruling PSOE ruling socialist party of Prime Minister Pedro Sánchez.

The revelations come after the two main parties in Spain’s Congress reached a compromise last week over the renewal of judges at the helm of the Spanish judiciary, including its General Council (CGPJ) and the Supreme Court.

Cosidó’s message is seen as an effort to dampen criticism within his party’s ranks after judge Manuel Marchena was chosen as the would-be president of the CGPJ, thus delegating the task of conducting the trial of pro-independence leaders to the progressive judge, Andrés Martínez Arrieta.

Leaked chats were met with severe criticism, especially by pro-independence leaders. ‘[Cosidó’s message] puts into words what we already knew: that Spain’s separation of powers is a mirage,’ said the Catalan vice president Pere Aragonès.

Catalan president Quim Torra said that ‘the rule of law and freedoms are not guaranteed’ in Spain, where there’s neither ‘judicial independence, nor impartiality, nor integrity’.

Cosidó told reporters that his message had been misinterpreted, but admitted that the words he used were ‘unfortunate’. He stressed that he did not refer to PP when talking about ‘controlling’ the judiciary, because ‘that’s not possible’.

Cosidó ruled out stepping down after the anti-austerity Podemos party called for his resignation both as PP’s spokesperson and as a member of the Spanish Senate.

Albert Rivera, the leader of Ciudadanos (Cs), PP’s main allies in Congress, deemed as ‘shameful’ the deal between PP and the PSOE ‘against an independent judiciary’.

Alberto Garzón, the leader of Izquierda Unida and Unidos Podemos’ second-in-command, also took on Cosidó. ‘Then it comes as a surprise that the judiciary is reactionary and partial,’ he said.