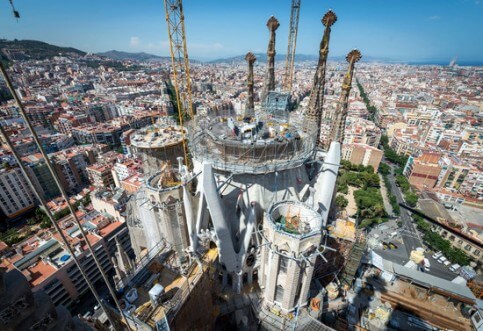 The Sagrada Familia, Antoni Gaudi’s still-unfinished modernist masterpiece, is one of Barcelona’s top tourist attractions -which in turn makes the central neighborhood around the church one of the most crowded in the city.

To combat this, the church has pledged to invest 36m euros over 10 years to improve mobility, urbanization, and the upkeeping of the public space. Of that amount, 22m euros will be destined specifically to help finance public transport to match the high-intensity use around the church.

Set to be completed by 2026, the Sagrada Familia has been under construction for 133 years so far – and for this entire time, it hasn’t had a proper license. Barcelona mayor Ada Colau announced that, by the first trimester of 2019, the license will be ‘completely regularized’. Having met with the head of the church’s Board of Construction, Colau deemed the day as ‘historic’ and highlighted the ‘will’ of both parties to take this ‘step’.

Colau also said that the two parties are ‘here, taking shared responsibility of the city’s heritage, of a well-loved icon, and also of the impact generated by these visits that our city likes so much’. But the meeting, while having made some ground, was not hailed by all as a success.

The biggest dispute remains to be resolved. One element of Gaudì’s original plans, if ultimately built, would mean demolishing residential buildings: a large stairway leading to what will be the church entrance. This, not touched upon in the latest agreement, has been contested by local residents and the city.

The spokesperson for the Sagrada Familia Neighbour Association, Joan Itxaso, criticised the agreement for excluding the issue. ‘One cannot elude the fundamental problem of the finalization of the church,’ he said. Itxaso also denounced that the agreement was made without the participation of the local residents, expressing that the City Council prioritised ‘the interest of a private entity’ over the ‘needs’ of the city.