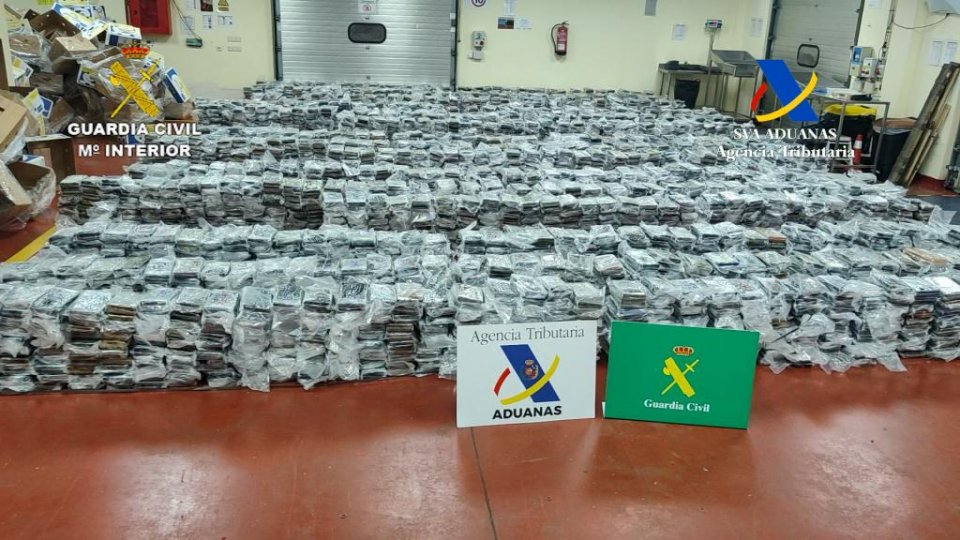 Spanish police said on Wednesday that they had seized 5.59 tonnes of cocaine worth over €340 million in the port of Valencia.

The Guardia Civil police said it is the largest cocaine seizure in Spain for more than four years, the third intervention in a single shipping container, and the most important in the port of Valencia since records exist, according to CITCO (Spain’s Intelligence Centre for Counter-Terrorism and Organised Crime).

The police found the drugs during a search of a suspicious shipping container that arrived in the port, one of Europe’s busiest, from South America, they said in a statement.

A photo shared by the ministry showed a pile of plastic-wrapped bricks of what it said was cocaine with the word ‘rey’ (‘king’), written in bold letters on them [see video via Tweet link below].

Spanish police began the investigation in 2021 that led to this latest seizure, after becoming suspicious that criminal gangs were ‘taking advantage’ of the legal importation of fruit and vegetables to bring drugs to Spain.

The Guardia Civil said the investigation was continuing and there had so far been no arrests.

The authorities did not say when the operation took place or from which country the container ship had arrived.

The announcement of the drug seizure comes two days after Europol said law enforcement authorities in six different countries including Spain had taken down a ‘super cartel’ of drugs traffickers [see Tweet link below] controlling about one third of the cocaine trade in Europe. The Guardia Civil said a total of 13 people had been arrested in the country as part of that joint operation.

The cartel would bring cocaine from Panama to Spain via the Mediterranean ports of Algeciras, Barcelona and Valencia and would launder the money it earned by buying real estate on Spain’s southern coast.

Spain’s proximity to North Africa, a key source of hashish, and its close ties with former colonies in Latin America, the world’s main cocaine-producing region, have made it a gateway into Europe for drugs.

👥 49 arrests following parallel investigations in Spain, France, Belgium, the Netherlands and the UAE with the support of Europol