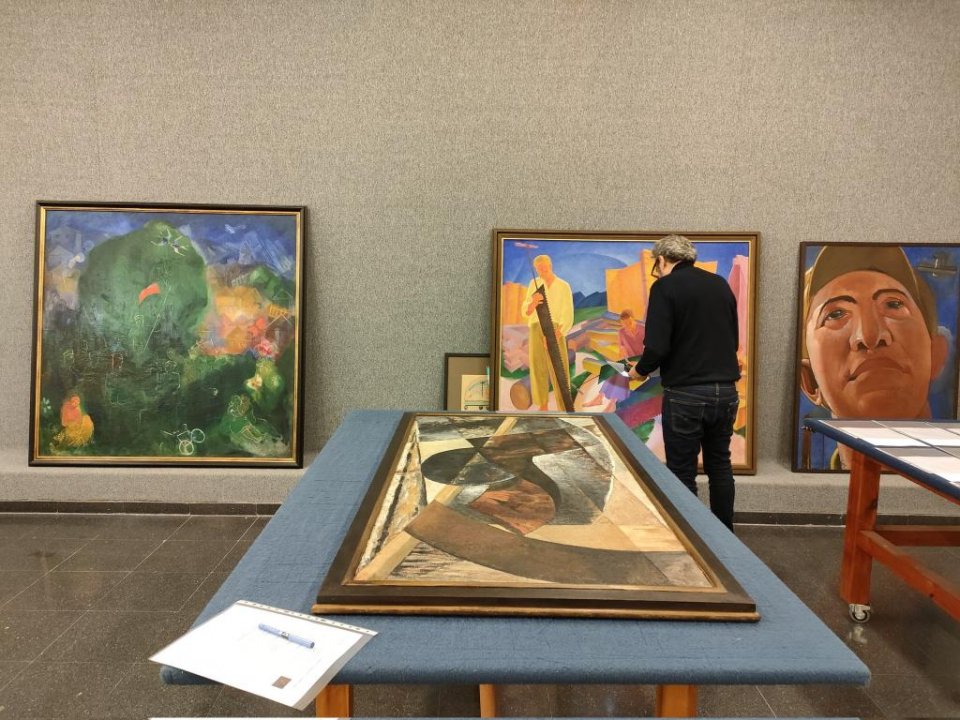 Many modern artworks removed from Kyiv to protect them from Russian bombs – that have already done huge damage to Ukraine’s cultural heritage – have gone on display at a Madrid’s Thyssen-Bornemisza Museum.

The works on show are part of the ‘In the Eye of the Storm: Modernism in Ukraine 1900-1930’ exhibition, that include oil paintings, sketches and collages.

Francesca Thyssen-Bornemisza founded ‘Museums for Ukraine’ which is seeking to showcase Ukrainian art, using the museum which houses her late father’s collection for the exhibition.

The Madrid exhibition is one of a number of showings of Ukraine’s cultural heritage across Europe, as well as an effort to raise awareness of the threat posed to the war-torn country’s artistic legacy as fighting grinds on.

Curators say it is one of the most comprehensive surveys of Ukrainian modern art in the period between 1900 to 1930.

Many of the works have hardly been seen outside of Ukraine. The exhibition will run at the museum until 30 April, and then go on show in Cologne in Germany from September 2023.

Ukraine President Volodymyr Zelensky said in a video shown at a preview Monday that ‘this is a vision of what Russia is trying to destroy’.

After weeks of intense preparation, the pieces were loaded into two trucks in mid-November just before the Ukrainian capital came under intense missile fire.

As it headed to the Polish border the convoy avoided passing infrastructure likely to be attacked, Thyssen-Bornemisza said.

When the convoy reached the border, they found it shut because a missile had just landed in a Polish village killing two people.

Thyssen-Bornemisza said she then asked Ukraine’s ambassador to Spain for help, who in turn contacted ‘every politician he knew between Poland and Ukraine’. It finally took them 12 hours during the night to get through.

UNESCO, the United Nations’ cultural agency, says over 200 cultural sites in Ukraine, including museums, have been damaged since Russia invaded Ukraine in February.

The exhibition follows a chronological order. It starts with the 1910s when Ukraine was part of the Russian empire and ends in the 1930s when several artists died during purges carried out by Soviet dictator Joseph Stalin, said one of the show’s curators Katia Denysova.