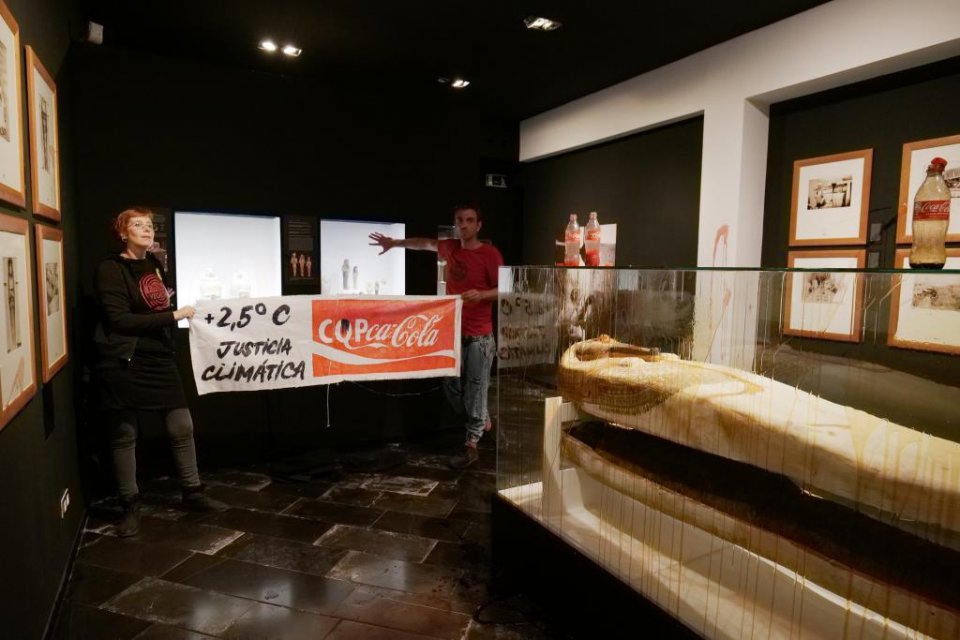 Climate activists splashed a viscous liquid representing ‘blood and oil’ over the glass case housing a replica mummy at Barcelona’s Egyptian Museum on Sunday in the latest ‘eco art attack’ targeting cultural exhibits in protest at inaction over global warming.

They then glued their hands beside a nearby exhibit and held up a modified Coca-Cola banner scrawled with the words ‘climate justice’.

The US drinks giant is one of the official sponsors of the UN’s COP27 climate summit in Egypt, a position widely denounced by environmentalists who say the company is behind much of the world’s plastic pollution.

When police arrived, the two activists cooperated and neither was arrested, but the museum said it would file a complaint for damages.

The protesting pair were part of Futuro Vegetal — the same group whose activists glued their hands to the frames of paintings by Spanish master Francisco Goya at Madrid’s Prado Museum on 5 November.

‘Politicians aren’t going to get us out of us this situation, this climate emergency,’ one of the activists said.

‘What do we want? Climate justice! When do we want it? Now!’ they chanted.

Sunday’s stunt was the latest in a string of climate protests by activists who have thrown soup at Vincent van Gogh paintings in London and Rome, and mashed potatoes on a Monet masterpiece.

On Thursday, dozens of the world’s top museums issued a statement saying they were ‘deeply shaken’ by these actions, adding that activists ‘severely underestimate’ the damage they could cause.

The Futuro Vegetal activists said their latest protest was to ‘highlight the emergency’ the world faces.

‘Currently 99% of the world’s plastic is produced from fossil fuels,’ the group said.

‘We find it hard to believe the global leader in plastic pollution is not going to use its influence as a sponsor of COP27 to advance its commercial interests given its total dependence on fossil fuels.’

The Egyptian Museum in Barcelona said that it ‘strongly condemns the acts of vandalism suffered by the visitors of the Museum this week’.

‘Museums are platforms for scientific divulgation, spaces for critical reflection and entities dedicated to protecting our cultural and natural heritage, aligned with the fight against climate change,’ it tweeted.

Deputy Mayor of Barcelona Jaume Collboni tweeted: ‘This is not activism: it is vandalism. The necessary action against climate emergency cannot be an excuse to attack museums and their heritage. My total condemnation of these reprehensible acts and my solidarity with the museum.’

Climate activists from @FuturoVegetal threw fake blood and oil on exhibitions at the Egyptian Museum of Barcelona to protest Coca-Cola's sponsorship of the #COP27 climate conference being held in Egypt 👇 pic.twitter.com/ziSkRAWTvA

ALSO READ: Climate activists glue their hands to the frames of Goya masterpieces at Prado museum.