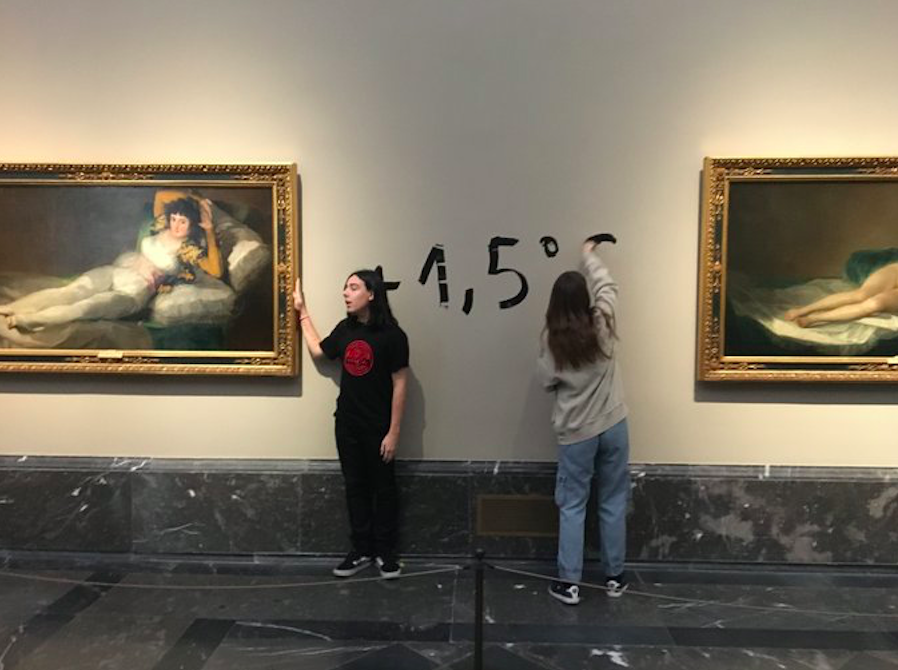 Two environmental activists stuck themselves to the frames of Spanish master Francisco Goya’s famous ‘Las Majas’ paintings at the Prado Museum in Madrid on Saturday. They also scrawled graffiti referencing the ‘+1.5C’ global temperature target on the wall between the paintings.

The two activists from a group known as ‘Futuro Vegetal’ each glued a hand to the frames of the two paintings and were later detained, police said.

The ‘+1.5C’ message was in reference to the Paris Agreement target of capping warming at 1.5C above pre-industrial levels.

Climate activist group Extinction Rebellion posted a video online showing the two activists each with a hand fixed on a painting before the museum’s security officials moved in.

The group said the two artworks in question were The Naked Maja and The Clothed Maja. The action was a protest in the face of rising world temperatures which will ‘provoke an unstable climate with serious consequences for all the planet’, the group said in a statement in Spanish.

The Prado Museum tweeted: ‘We condemn the act of protest that has taken place in the museum. The works have not been damaged although the frames have slight damage. We are working to get back to normal as soon as possible. We reject endangering cultural heritage as a means of protest.’

The museum later tweeted again, showing images from the gallery where ‘Las Majas’ were on display, stating that it had been re-opened and restored to normality.

The incident comes amid a wave of art gallery focused protests across Europe in recent weeks, including two protesters who threw tomato soup over Van Gogh’s Sunflowers at the National Gallery in London in October.

On Friday, a group also splashed pea soup onto a Vincent van Gogh masterpiece in Rome. The Sower, an 1888 painting by the Dutch artist depicting a farmer sowing his land under a dominating sun, was exhibited behind glass and undamaged. Four activists were arrested, according to news reports.

Other actions have seen cake or mashed potatoes used in recent weeks.They have targeted masterpieces such as the Mona Lisa by Leonardo da Vinci in the Louvre in Paris or Girl with a Pearl Earring by Vermeer at The Hague’s Mauritshuis museum. Those paintings were covered by glass and were undamaged.