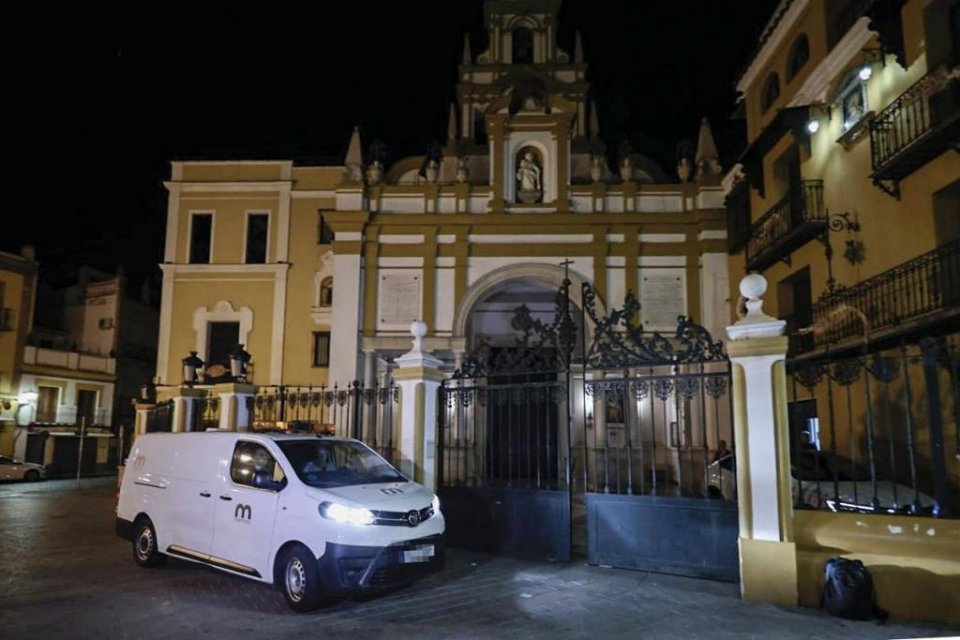 The remains of a Francoist general who is believed to have ordered the shooting of Spain’s most famous poet among thousands of others, were relocated on Thursday from a Seville church following a new law which bans the glorification of key figures of Spain’s dictatorship.

A small group of family members applauded as a van containing the remains of general Gonzalo Queipo de Llano, his wife and his right-hand man, emerged from Seville’s iconic Macarena basilica at 2.20am, television images showed. Some people chanted ‘Viva Queipo!’.

Queipo de Llano ran a military campaign in the south during Spain’s 1936-39 Civil War and is believed to have given the green light to the shooting of thousands of people, including celebrated Spanish poet Federico Garcia Lorca.

The Macarena brotherhood, the Roman Catholic association that looks after the basilica, said the exhumations were carried out with the consent of the family members of the three people.

They were done to comply with the new ‘Law on Democratic Memory’ that came into effect last month, it added in a statement.

The law, which tackles the legacy of Franco’s 1939-1975 dictatorship and the three-year civil war that preceded it, says leaders of the 1936 military coup that triggered the civil war may not remain buried in prominent public spaces other than a cemetery.

Organisations that praise or support the policies and leaders of Spain’s 20th-century dictatorship, including the private Francisco Franco Foundation, will now be banned under the legislation. Fines for non-compliance will range from 200 to 150,000 euros. The new law does not allow for crimes under the dictatorship to be prosecuted, however.

The law also allows for a national DNA bank to be established to help identify remains and for the creation of a map of all mass graves in the country.

‘The state must exhume the remains of the victims of the Franco dictatorship,’ Prime Minister Pedro Sánchez told parliament in July.

‘There are still 114,000 people who were forcibly disappeared in Spain, mostly Republicans,’ he said, referring to people whose fate was deliberately hidden.

Only Cambodia, he said, had more ‘disappeared’ people than Spain, its population suffering atrocities under the 1975-1979 Khmer Rouge regime.

The Macarena brotherhood did not say to where Queipo de Llano’s remains would be moved. He was a member of the brotherhood and was buried in the Macarena basilica when he died in 1951.

Between 1936 and 1951, repression at the hands of Franco’s forces claimed the lives of some 50,000 people in Andalusia where Queipo de Llano operated, according to the regional government.

The Spanish government welcomed the exhumations.

‘This is what we have to do as a democratic and civilised country,’ Deputy Prime Minister Yolanda Díaz told public television TVE.

But the leader of far-right party Vox party, Santiago Abascal, accused the government of ‘profaning graves’.

Since taking power in 2018, Prime Minister Pedro Sánchez has made several moves to address Franco’s legacy, including the exhumation of the dictator in October 2019. Franco’s legacy has remained a very divisive issue in Spain, and even more so since the rise of the Vox party in the past few years, currently the third largest party in the country.

This is what happens when the Left takes power. When Franco died the agreement was that there would be no revenge taken but that elections would decide the course of the country. The Left won, there was an attempted coup but the armed forces did not support it and and democratic process proceeded peacefully. So far so good. But then the Left broke its word as usual, because it always does, and found some way to sneak around the no-recrimination agreement and start suppressing pro-Francoist people and sentiment.
These suppression laws are the result. They suppress free speech and expression, both public and private, and do nothing to advance democracy. In fact they are every bit as dictatorial as the the dictadura. And what about the people murdered by the Republic? As in Catalonia? Don’t they count? Guess not.
Charles Knapp
USA
Independent scholar of the Civil War