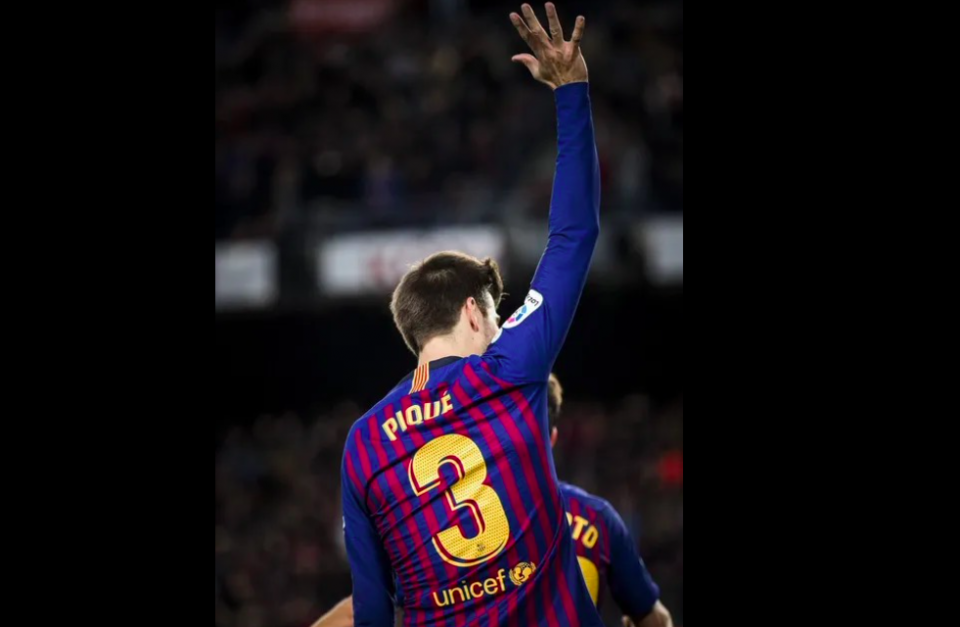 Gerard Piqué played his last match at Camp Nou for FC Barcelona on Saturday. His career has been laden with silverware and glorious memories, along with controversy.

Piqué had said in a video posted on his Twitter account on Thursday [see below] that ‘this Saturday will be my last game at Camp Nou’.

‘It is the moment to end this stage of my life,’ Piqué said. ‘I always said that after Barcelona there will be no other club, and that is the way it is going to be.’

But he also said ‘I’ll be back’, hinting at running to become the future president of the club at some point.

The 35-year-old defender has cut his contract short, with a year-and-a-half yet to run, by his announcement of his imminent retirement.

Piqué featured for the last time at Camp Nou against Almeria on Saturday, with Barcelona winning 2-0. He is still expected to travel for the game against Osasuna on Tuesday.

While his manager, Xavi Hernández, left the club in a blaze of glory after winning the treble alongside Piqué in 2015, the centre-back departs mid-season, following a humiliating Champions League elimination.

Out of favour, when Piqué has played his performances have come under scrutiny, and his sudden decision has been made to wrest control of the situation, preserving his dignity, before his reputation can degrade.

Despite glorious years in his prime, making a case for being the club’s best ever defender, winning three Champions Leagues, eight La Liga titles and seven Copas del Rey with Barça, recent seasons have seen him and the other veterans linked with repeated failures in Europe.

Most recently, a glaring Piqué error against Inter Milan cost the team a goal, with Barcelona drawing and virtually sealing their Champions League exit.

Supporters showed their anger with whistles when he came on against Villarreal and against Valencia he was mocked for not being ready to replace the injured Jules Koundé.

‘For months they have talked about me and until now I haven’t said anything, but now I want to be the one to talk to you about myself,’ Piqué said, in an emotional video released on social media platforms on Thursday. Via Twitter alone [see below], the video had been viewed nearly 15 million times within 24 hours.

Piqué has never been shy of doing the talking, from wars of words with eternal rivals Real Madrid, Catalan neighbours Espanyol, and anyone else who got in his or Barcelona’s way, including Spanish media and even the club’s board.

Media-savvy and businessman with his fingers in many pies, including his own production company Kosmos, and revamping tennis’s Davis Cup, Piqué will be aware of the message he is sending by cutting short his fat contract, which was a problem for Barcelona.

Piqué was also involved in controversial deals with the Spanish Football Federation involving its holding of the Spanish Super Cup competition in Saudi Arabia.

‘We are working on the resolution of his deal but there is a great disposition on the part of the player to help the club,’ said president Joan Laporta.

‘Gerard understands the financial fair play situation perfectly at Barcelona. The salary level needs to be lowered and Piqué is ready to help the club in this sense.’

It is a move certain to garner good will from supporters, which will be remembered in a future bid to become the club’s president, a goal of Piqué’s.

The noise around Piqué through his career helped grow his profile – as did his former partner, Colombian pop-star Shakira – but sometimes spoke louder than his immense quality as a defender.

Playing at Barcelona is particularly hard for centre-backs, with his coaches including Pep Guardiola, utilising incredibly high defensive lines.

It meant Piqué’s reading of the game had to be immaculate, along with his ability on the ball, starting attacks from the back. Often he ended them too, with 52 goals in 615 appearances for the club. 29 of those goals were scored in La Liga and 14 in the Champions League.

Piqué joined Barcelona at 10 years old but signed for Manchester United and made his professional debut there in 2004, winning a Champions League and Premier League double in 2008.

Guardiola gave him his Barcelona breakthrough after he returned that year, and he quickly became vital as the Catalans won the treble in the 2008-09 season.

Piqué also netted against Real Madrid in a famous 6-2 win at the Santiago Bernabeu in 2009, celebrating wildly to upset Los Blancos supporters for the first, but certainly not the last, time.

29 November 2010 was another fine night at Camp Nou, when Barça again routed Real Madrid, this time 5-0. Pedro, Xavi, Villa (x2) and Jeffren scored the goals and the image of Piqué holding up five fingers, one for each goal, is another image that he will always be remembered for [see article’s main image].

By 2018 he had been made third captain, and after Leo Messi left, he became second-in-command to Sergio Busquets.

Spain, using many Barcelona players, including Piqué, won the 2010 World Cup and the 2012 Euros, concluding a golden era for La Roja on the international stage.

Piqué teamed up with Sergio Ramos, his Real Madrid nemesis, as they put their club rivalries to the side and created a formidable partnership.

There was time for another club treble first under Luis Enrique in 2015, with Piqué starting the season shakily, like Barcelona as a whole, but finding spectacular form by the end of the season.

As Barcelona added league titles but struggled in Europe, with big defeats by Roma, Liverpool and Bayern Munich among others, Piqué’s extra-curricular activities came under fire.

The defender also took flak for his production company making Antoine Griezmann’s documentary over whether to join Barcelona from Atletico, in which he snubbed the Catalans in 2018.

Despite good performances last season, this campaign has been painful. Off the pitch his partnership with Shakira collapsed, and on it, he was off the pace.

Xavi brought in Kounde and Andreas Christensen in the summer and Piqué dropped quickly out of favour.

Perhaps not for long though. In his goodbye video Piqué looked up at the presidential box and said: ‘Sooner or later, I’ll be back.’