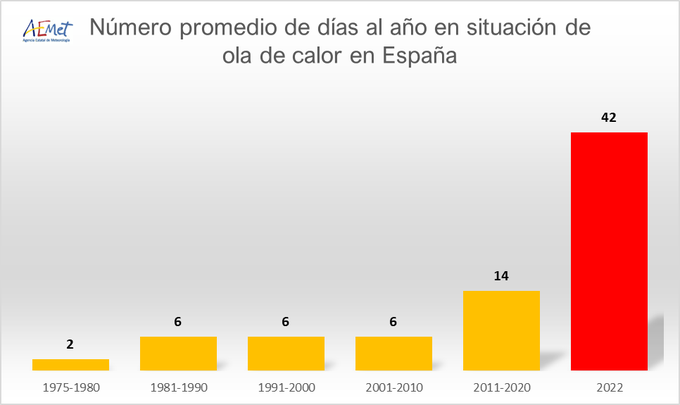 This year Europe experienced its hottest summer on record, according to the European Commission’s Copernicus Climate Change Service (C3S), and with separate research indicating that the length and frequency of heatwaves on the continent has nearly tripled in the past century.

Spain’s national weather office, AEMET, has ratified the C3S statistics, with the country having experienced its hottest summer since records began in 1961. The previous record was in 2003, when it was 1.8C hotter than the average. This year has surpassed that, by a further 0.4C.

The average temperature on mainland Spain has been 24.7C this summer, 2C higher than the average from 1980-2010.

Since the first official heatwave was declared in Spain on 12 June this year, 42 days have been classified as a heatwave – almost half the whole summer. The number is three times the previous decade’s average of 14, and six times as many as the decade of 2001-2010.

As detailed in a recent report issued by C3S, the average temperature over Europe in 2022 was the highest on record for both August and summer (June-August) by substantial margins of 0.8C over 2018 for August and 0.4C over 2021 for summer.

Heatwaves were also prevalent in this part of Europe and over central and eastern China for all three summer months. North America also experienced one of its warmest summers.

Freja Vamborg of the C3S said: ‘An intense series of heatwaves across Europe paired with unusually dry conditions, have led to a summer of extremes with records in terms of temperature, drought and fire activity in many parts of Europe, affecting society and nature in various ways. The Copernicus Climate Change Service data shows that we’ve not only had record August temperatures for Europe but also for summer, with the previous summer record only being one year old.’

Another team of researchers at the University of Bern in Switzerland has compiled evidence from 54 high-quality recording locations from Sweden to Croatia, to find that heatwaves last an average of 3 days now – with some lasting up to 4.5 days – compared to an average of around 1.5 days in 1880.